After anti-Indigenous vandalism on the Rock: “And yet we are still here” 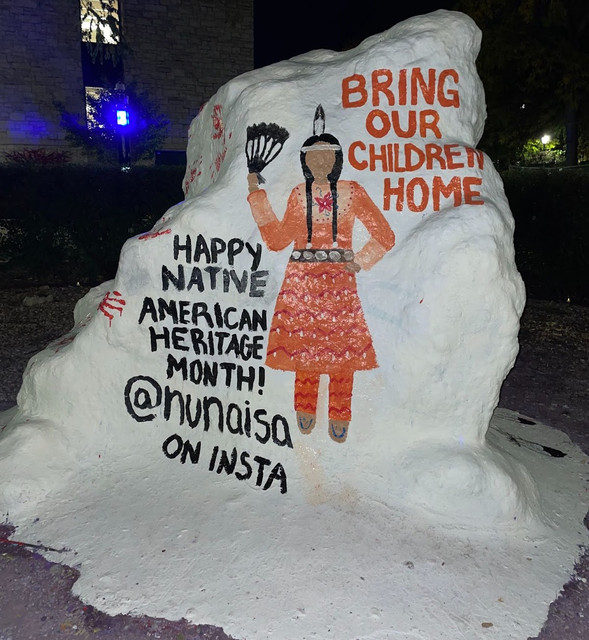 NAISA painted the front of the Rock with a Jingle Dress Dancer and a message about the violent history of the American Indian Residential School system. Vandals scribbled over the two messages. Photo courtesy of the Native American and Indigenous Student Alliance.

For the second time in less than a year, Indigenous students at Northwestern painted the Rock during Native American Heritage Month, only to discover less than two days later that others had defaced the Rock with anti-Indigenous messages.

After guarding the Rock for 24 hours and spending another three hours painting it on the night of Thursday, Nov. 3, the Native American and Indigenous Student Alliance (NAISA) discovered hateful and racist vandalism covering their work on Sunday, Nov. 7.

“As someone who was really pushing for us to paint the Rock, I’m just like, was it worth it to go through all of that, and to have this happen?” said SESP senior Isabel St. Arnold of the Keweenaw Bay Ojibwe and a NAISA member. “I just keep trying to look back on how excited and how proud we were when we were done painting the Rock. And how much love I felt for everyone. But there’s a lot of guilt there too.”

On the Rock’s bench, NAISA had written, “You are on Anishinaabe land,” but as of Sunday morning, it had been painted over to read “You are on China’s land” and “Ojibwe? No way!!” The University painted over these phrases as of the morning of Tuesday, Nov. 9, in accordance with their policy on hate speech, according to a member of NAISA.

NAISA’s designs also included a Jingle Dress Dancer and messages such as “Happy Native American Heritage Month;” “Bring our children home,” in reference to the American Indian Residential School system; and “No more stolen sisters,” referring to missing and murdered Indigenous women, girls and two-spirit individuals. The vandals scribbled over these messages with paint.

To process the hostility together, NAISA held an affinity space for Indigenous community members at the Center for Native American and Indigenous Research (CNAIR) on Saturday, Nov. 6, at 9 pm. At 10 pm, they gathered at the Rock, along with other members of Northwestern’s community, to reflect on the act and read their response. They extended solidarity to Ojibwe community members and Chinese students harmed by the vandals’ racist rhetoric.

“We hope this brings awareness to our communal fight against colonial power and its extension onto this campus,” the statement read. “We have endured and will continue to stand up for our community, and we ask for your support.”

After NAISA members read the statement, Indigenous faculty and students stepped up to the microphone to reflect.

“I really want to ask everyone here to really no longer allow Northwestern to be unaccountable to Indigenous people,” said SESP and Weinberg professor Megan Bang, who is Ojibwe. “And the truth of the matter is, there’s not enough Indigenous people on campus for the administration to really respond. So we need allies and supporters like you all to actually demand that you learn better.”

While people were speaking, other NAISA members strung up a banner between two trees at the Rock that read, “And yet, we are still here.” They made the banner and prepared the statement earlier that day.

“In addition to mourning and grieving together, it felt like we had to do something right away,” St. Arnold said. “And so to have to do that, while you’re in that grieving stage or mourning stage, was really hard and really stressful.”

In its statement, NAISA requested a meeting with Northwestern administration to “plan a substantive path forward to create change needed on this campus.” The group said Northwestern is responsible for educating the campus community to ensure hateful incidents such as this do not happen.

“It's one thing to create consequences for whoever did this,” said SESP junior Isabella Twocrow, who is Oglala Lakota and a member of the Ho-Chunk Nation. She is also a member of NAISA. “But what did they learn from that? What do they learn from just getting a little slap on the wrist? We need to create extensive education programs here on this campus. They need to fund the education programs that are already in place.”

The evening of Monday, Nov. 8, the University released a statement online extending words of support to Indigenous students. The statement read, “This incident demonstrates there is still a wide need for robust education and understanding around Native Americans and Indigenous Peoples, their experiences, contributions, histories and issues in today’s society and beyond.”

The University has yet to announce efforts to combat anti-Indigenous hate following this incident.

The statement about the anti-Indigenous rhetoric was not emailed to students, but the University sent an email on Tuesday evening with the subject line “Demonstrations and freedom of expression” that discussed a recent violation of Northwestern’s demonstration guidelines.

On Saturday’s football game against Iowa, a group of Northwestern students rushed onto Ryan Field during a media timeout. The email said that the University reserves the right to suspend, expel or pursue legal action against students who break demonstration policy. On social media, students complained that the University threatened action against the protestors from Saturday’s demonstration but did not mention the anti-Indigenous hate in the body of the email. A link at the bottom of the email called Leadership Notes contained a link to Northwestern's statements page that included the statement on the Rock’s defacing.

“Just having the University acknowledge that this happened is not enough,” said Weinberg sophomore Olivia Masse, a member of the Métis Nation of Ontario and a NAISA member. “Because you can say that this happened, but without actions or a concrete plan moving forward, nothing is really going to change. This happened last year.”

Twocrow is the coordinator of Native American and Indigenous student outreach with the Northwestern admissions office.

“There are so many news stories about that,” St. Arnold said. “It was on the Northwestern website, and it was all very hyped up and made to look like this campus is a place for Indigenous people and a place for us to thrive and be here. And so when the Rock is vandalized, it’s just showing me what we already knew, but showing everyone else that this place is still very colonial, it’s still a settler colonial project.”

For Native American Heritage Month, Multicultural Student Affairs (MSA) created a list of 30 days of Indigenous Events, with programming throughout November. Some events include exhibitions at the Block Museum, a smudging ceremony and a commemoration of the Sand Creek Massacre.

“While we were working on our banner and our statement together, despite how painful and violent this all was, I was still hearing laughter,” St. Arnold said. “And I think that’s a really big deal, because humor is a big part of healing in Native communities. And so to be able to be in community with each other, and to still find happiness with each other and humor, and to be able to support each other in that way, was really important.”

After the Rock's defacing, students reached out to NAISA asking what they could do to support Indigenous students. Northwestern community members started leaving written notes on the bench of the Rock, held down by small stones. Some read “Standing with you in love and light” and “You deserve to take up space.”

“We are also getting a ton of support and community within the people at MSA and CNAIR and [from] the graduate students,” Masse said. “That has been a big source of support for us, and this love and community, which has definitely been a positive in all this.”

NAISA members said they were trying to balance the healing process as well as the labor of educating others that is being thrust upon Northwestern's Native community right now.

“I think an important thing to note is that there’s a lot of work being done, but I think most of that work still ends up falling on the backs of Native faculty and Native staff and students,” St. Arnold said. “Northwestern as an institution, it doesn’t really feel like they’re the ones doing the actual work. And that’s frustrating because it shouldn’t be falling on all of us.”

While the vandalism at the Rock brought to light the need to support the Indigenous community on campus, NAISA said it’s the University’s responsibility to take accountability for creating an environment that enabled this to happen.