Assistance animals, assemble: How bonds between students and their emotional support animals go beyond just ‘assistance’

Bienen first-year India Wade didn’t always have a cuddly relationship with birds. Although she grew up with her mom’s bird since kindergarten, she had failed to connect with him, dealing with his nippy tendencies and the laugh – a sound he learned to mimic from her mother – that followed his persistent biting.

That was until she met Ollie, a blind 7-year-old jenday conure that would later become her on-campus assistance animal.

Wade first met Ollie at the beginning of 2021 when she visited a bird rescuer in Northern California. The rescuer brought Ollie from the back room and placed him on her hand, and she felt an instant connection.

“I immediately knew that this was a very calm, gentle bird, which I think is something that is really beneficial to me,” Wade said. “He stood on my hand for a little bit, but he eventually rushed up to my shoulder and basically stayed there.” 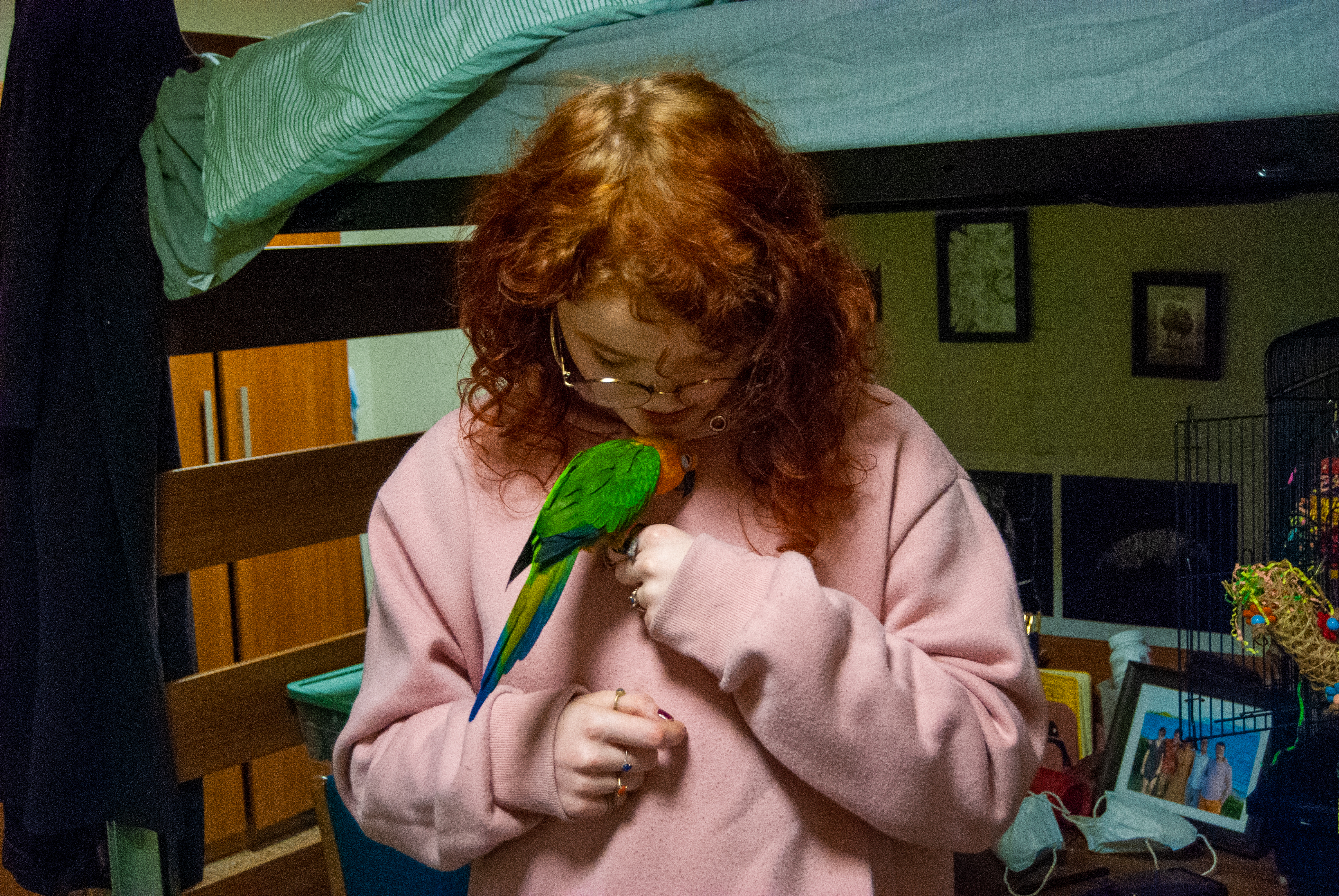 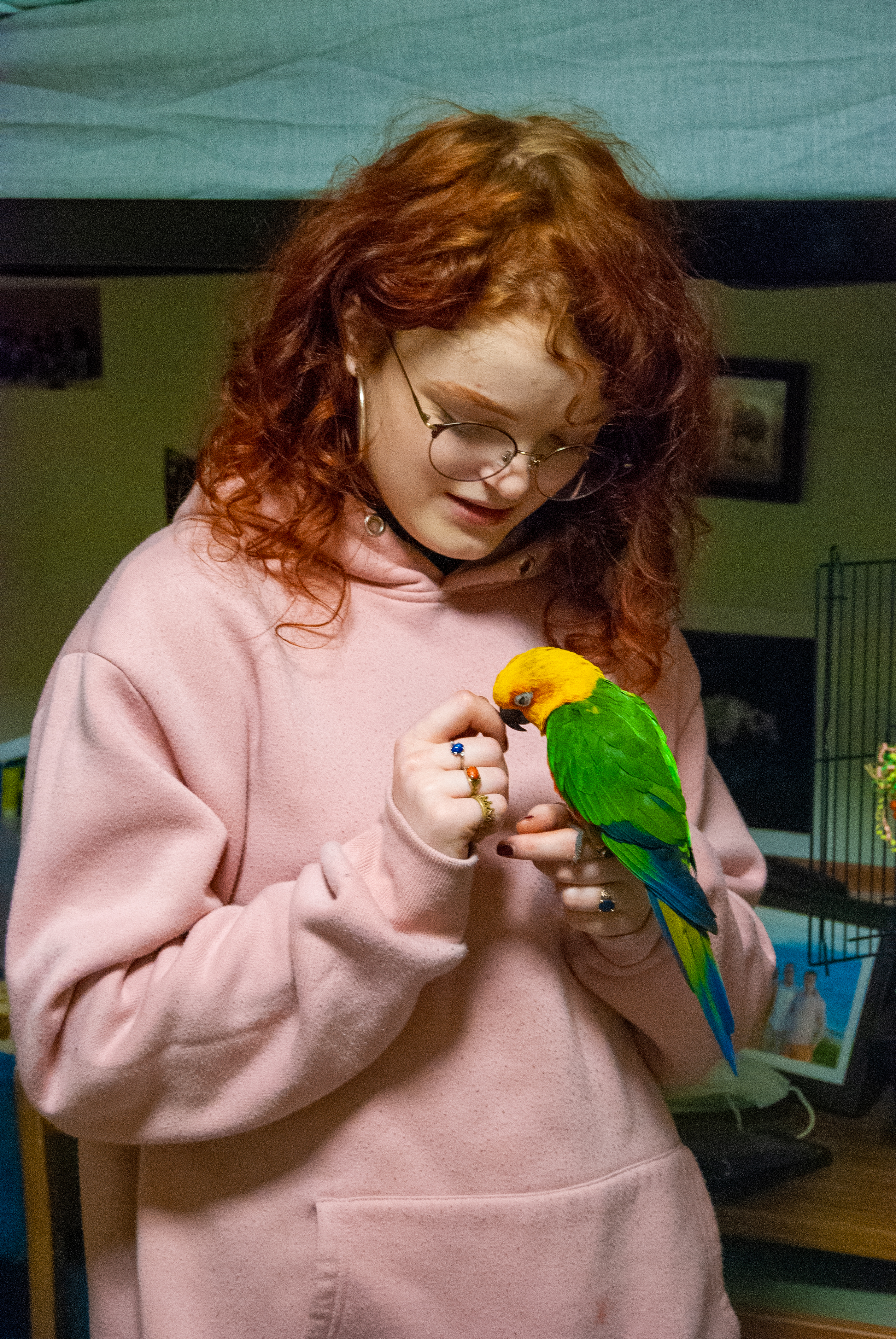 According to Wade, Ollie’s presence on campus serves as a support system in which she finds both a comforting routine and emotional solace.

“It’s really nice having a routine with him,” she said. “I go to Whole Foods and buy vegetables for my bird, which means I also get vegetables for myself. Also, I struggle pretty heavily with mental health stuff. When I feel myself spiraling, I can go to him and my mood is immediately lifted. It’s amazing seeing what this little bird can do.”

Likewise, Weinberg third-year Ivanka Shen lives with her assistance animal Cozy, a cat she adopted before she transferred to Northwestern from Rice University this fall. Shen agrees with Wade: The process of caring for another living being helps her stay motivated to start her day.

“She helps me keep my daily routine especially when I’m a little stressed or busy,” Shen said. “Because having to take care of a cat sometimes can even be a motivation for my day.”

Ollie and Cozy are just two of the assistance animals that live with students across Northwestern’s campus. The University’s official policy regarding animals on campus defines assistance animals, also referred to as emotional support animals, as “Animals that provide emotional support or comfort that alleviates one or more identified symptoms or effects of a person’s disability.” Some students who arrived on campus with their assistance animals this fall expressed their appreciation for the day-to-day support that their animals offer with their mental health.

Riding alongside trunks filled with clothes and personal belongings, Cavachon assistance dog Hero, rolled up to Evanston with Medill first-year Amaya Mikolic-Berrios. Like Shen, Mikolic-Berrios explained that her relationship with Hero has helped her come to important realizations about self-care.

“Having somebody I have to take care of, knowing I need to leave my room because I need to take him out for a walk – that’s what made me leave the room a lot of times,” Mikolic-Berrios said. “It makes you realize you also need to take care of yourself. It made me realize that Hero deserves time to eat and drink and sleep, so I also deserve that time.”

Mikolic-Berrios first met Hero when he was a puppy. Since then, their journey to NU is just one of the experiences the two have shared. Certain moments, however, have especially led Hero to live up to his name.

“When I was in middle school, I was extremely depressed and suicidal, and at one point I did attempt suicide,” Mikolic-Berrios said. “He came up to me and he started scratching at me. And I stopped. I always kind of feel that he saved me that day.” 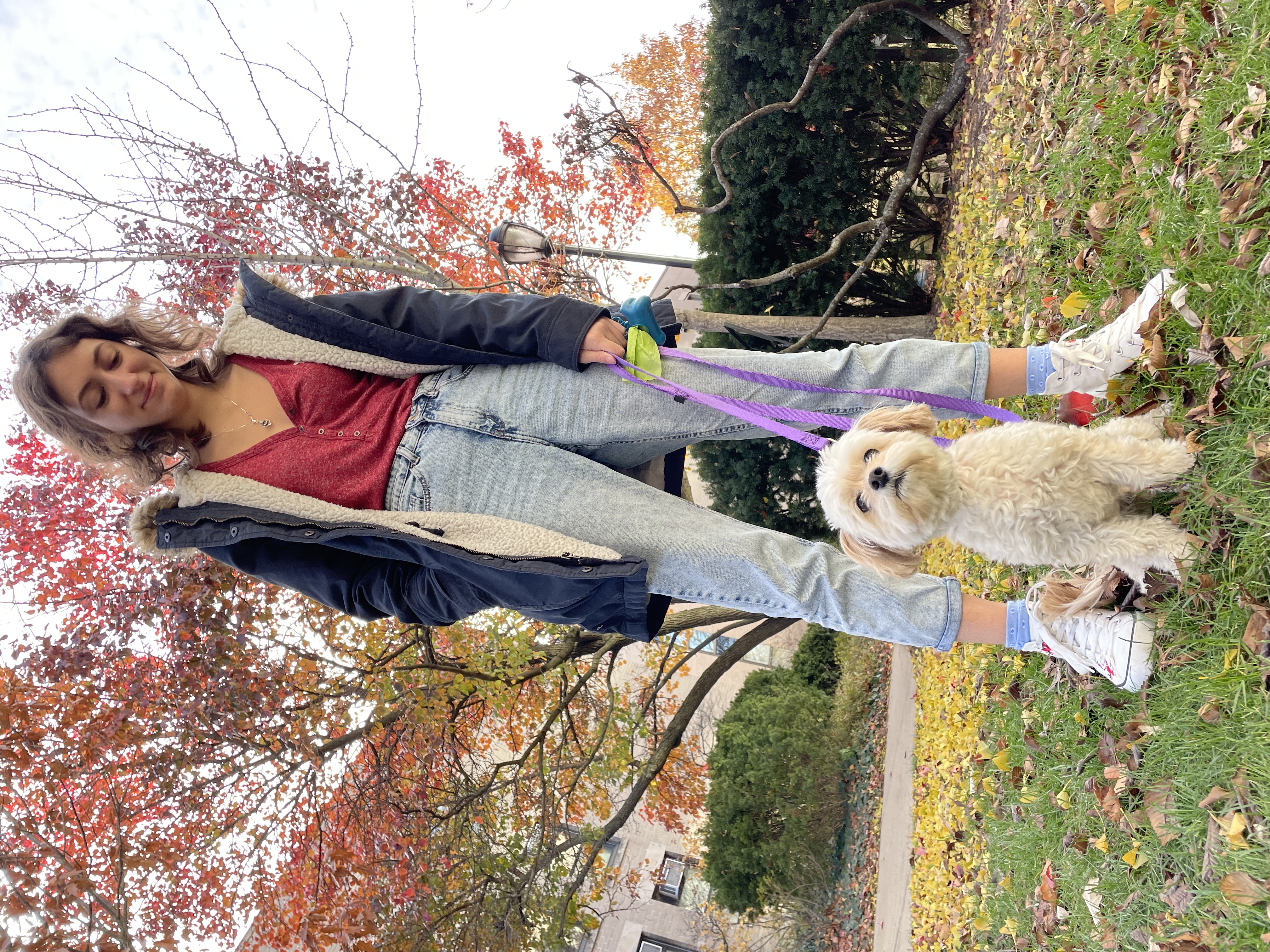 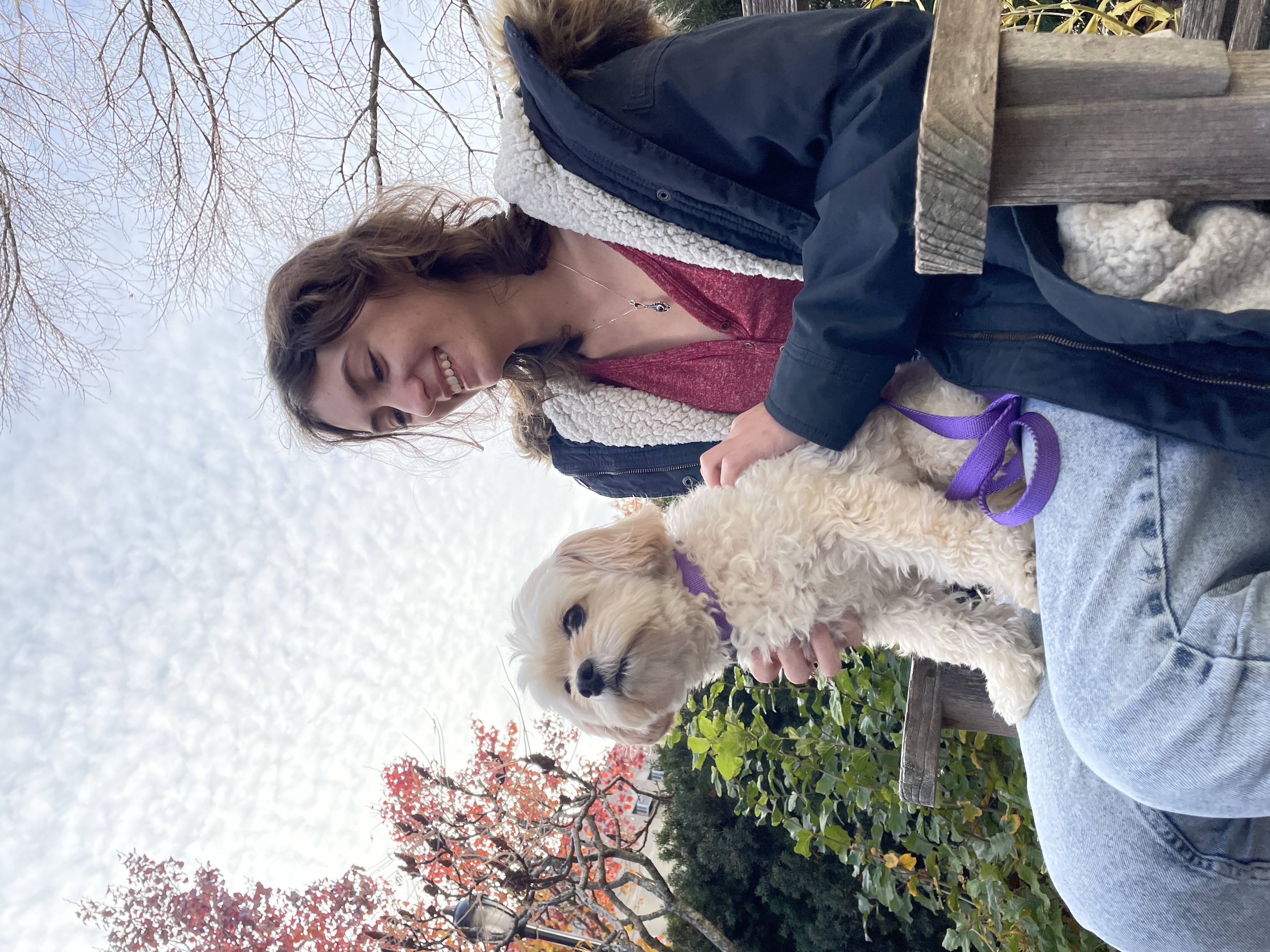 Despite Hero’s significance in her daily life on campus, Mikolic-Berrios is often hesitant to talk about Hero openly due to misconceptions surrounding assistance animals.

“I think I’ve internalized those stereotypes and I always preface [conversations about Hero] with saying that I know sometimes it’s seen as a joke thing,” Mikolic-Berrios said. “I don’t think a lot of people understand – at least, I can only speak in my case – how much he really genuinely helps me get through the day.”

Wade has received similar reactions when informing people about Ollie.

“Whenever I bring up the fact that I was able to bring my bird to campus, people are like, ‘Oh my gosh, you cheated the system! You’re bringing your pet to school!’” Wade said.

When she gets these responses, Wade contends by educating people about Ollie’s job: “Because he is not just a pet. He legitimately helps me with some pretty serious issues that I have.” 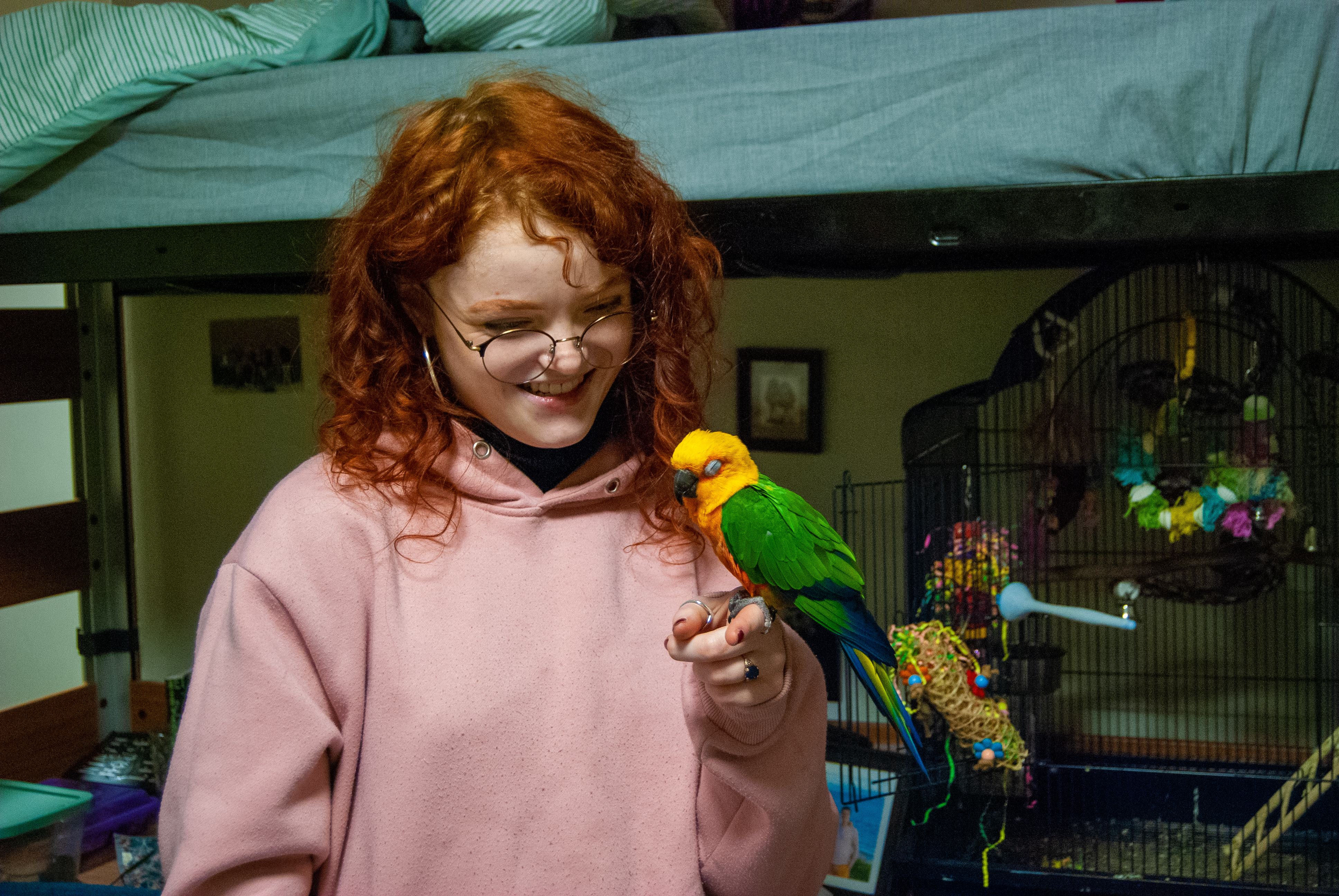 Wade smiles at her bird, Ollie. Photo by Parker Stava / North By Northwestern

It’s not all puppies and rainbows

Kristen Jacobson, an Associate Professor of Psychiatry and Behavioral Neuroscience at the University of Chicago, put forth a word of caution toward notions that assistance animals offer a solution to daily struggles against mental health challenges. While it’s easy to associate improvements in mental health with positive interactions with animals, Jacobson explained, this connection fails to address the systemic stressors that cause mental health struggles.

“Pets are not a panacea. Dogs don’t cure cancer,” Jacobson said. “Your [assistance animal] is not going to make you less stressed about a deadline for a paper that’s due or the racism you face on a daily basis, or anything like that. But they make you feel better for a few minutes and maybe that’s enough.”

In 2009, Jacobson received a grant to study the science of human-animal interactions. To her disappointment, however, the field was fraught with flawed studies that lacked substantial scientific value, drawing that Jacobson referred to as “dogs-are-magic” conclusions. Even with the recent growth in the scholarship surrounding the impact of assistance animals, Jacobson explained that there is a disconnect between the way people feel about an animal’s impact and the biological bases for these feelings.

“I don’t think we are seeing really strong evidence that students who bring pets onto campus have less stress than students who don’t, because the stress isn’t related to anything the pet can fix,” Jacobson said.

Jacobson also noted increasing acceptance of assistance animals has led to exploitation of their services, such as when the Department of Transportation (DOT) broadened guidelines to allow passengers to fly with their emotional support animals as long as they provided letters and vest indicators.

“There was a totally predatory cottage industry that jumped up on the Internet that was, ‘just give $49.95 and we’ll write you a letter and say that you need an emotional support animal!’” Jacobson said. “And 2020 had all these exposés about bringing boa constrictors or roosters on the plane. Predictably, now, the pendulum has really shifted backwards.”

Last December, the DOT revised its guidelines, resulting in most airlines defining service animals more narrowly. Jacobson emphasized that it is key to carefully evaluate official policies, examining both the opportunities and potential drawbacks of assistance animals.

“I am a huge proponent of human-animal interactions, but there’s so much more we need to know from a scientific point of view,” Jacobson said. “We have to consider both the negatives and positives of these programs.”

And according to Jill Schneider, Director of Accessible NU and Associate Dean of Students, the necessity for caution that Jacobson outlined is the reason why there are specific procedures in place to process student requests for assistance animals.

“I think our processes do a good job outlining what needs to be submitted and which department needs to be contacted in order to take advantage of those disability access resources when needed,” Schneider said.

The University’s policies also make distinctions between service animals and assistance animals, interchangeably referred to as emotional support animals (ESA). Northwestern defines service animals as “dogs that are individually trained to do work or perform tasks for the benefit of an individual with a disability,” while assistance animals offer emotional support and comfort but cannot help out with “activities of daily living.”

Another key difference between the two is where these animals are permitted on campus. Service animals are able to accompany students in public areas of the university such as classrooms or libraries, while assistance animals are generally restricted to serving students in their dorm rooms. 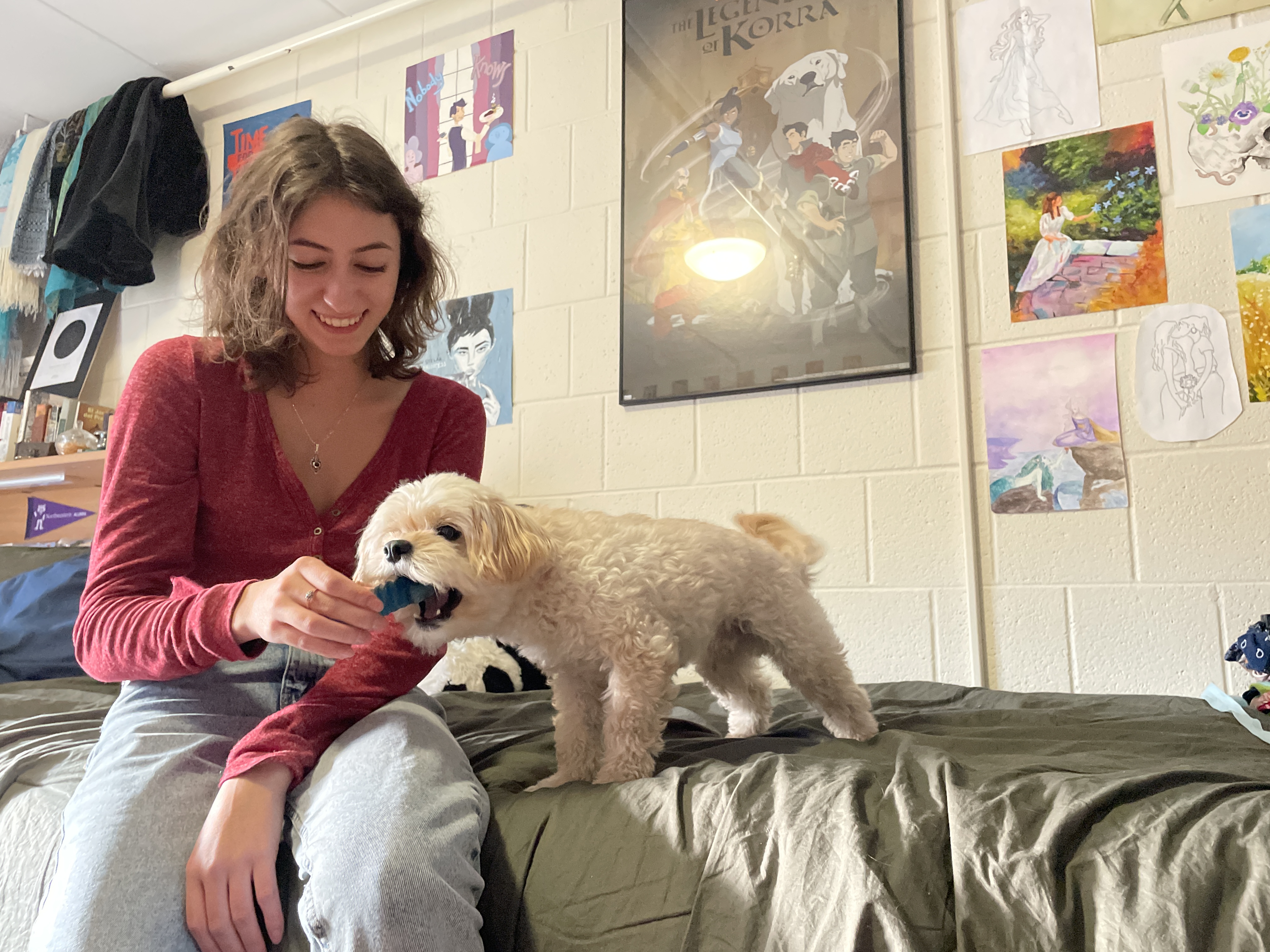 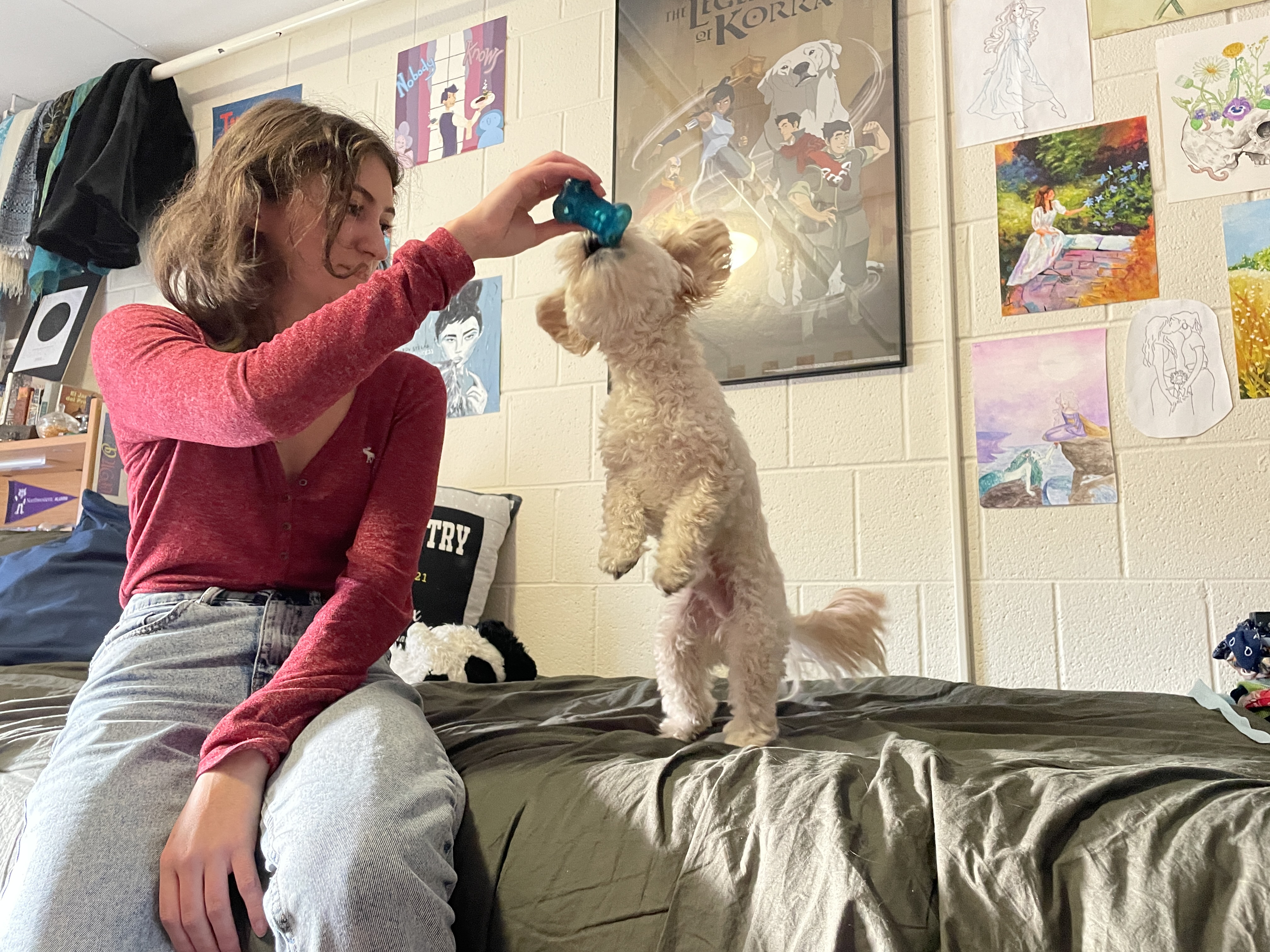 Mikolic-Berrios plays with Hero in her dorm room. Photos by Esther Lim / North by Northwestern

Because of this, Schneider explained, most requests for assistance animals from students are processed by Residential Services through a Housing and Dining Accommodation request, where students will be prompted to provide documentation from a licensed mental health professional outlining a diagnosis and a recommendation for assistance animals. Upon approval by a review committee which includes Counseling and Psychological Services, Residential Services reaches out to the student with additional forms that they must complete.

Jenny Douglas, Interim Director of Operations and Services of Residential Services, explained that these forms are intended to outline the responsibilities that both Residential Services and students have in regards to on-campus assistance animals. During this process, students must provide proof of a pet license, confirm that roommates and suitemates have been notified of an animal’s presence, and even learn about local veterinary services for their animals.

According to Schneider, the presence of assistance animals on campus is backed up and supported by legislation – namely, the Fair Housing Act, which requires housing providers to offer opportunities of reasonable accommodation for those who depend on assistance animals. Both Schneider and Douglas agree on one thing, however: Even beyond the necessity for these opportunities created by law, it’s only reasonable that an institution provides the tools its students need to thrive and be well.

“Residential Services is committed to supporting student wellness, and the ability for students to have ESAs in on-campus housing can be an important factor in maintaining mental and or physical well-being,” Douglas said.

More than their title

Beyond the paperwork and the official documents, the bonds students make with their assistance animals are based on deep emotional connections. According to Shen, Cozy helps her redirect negative emotions that come with her eating disorder symptoms into positive ones.

“There was one night when I was feeling really bad and she spilled a bottle of water on my floor,” Shen said. “But [at] that moment, I just felt like there were way more funnier or happier things I can look at that I can pay attention to than focusing on my emotions at that time. It just made me realize that there are a lot of happy things out there.” 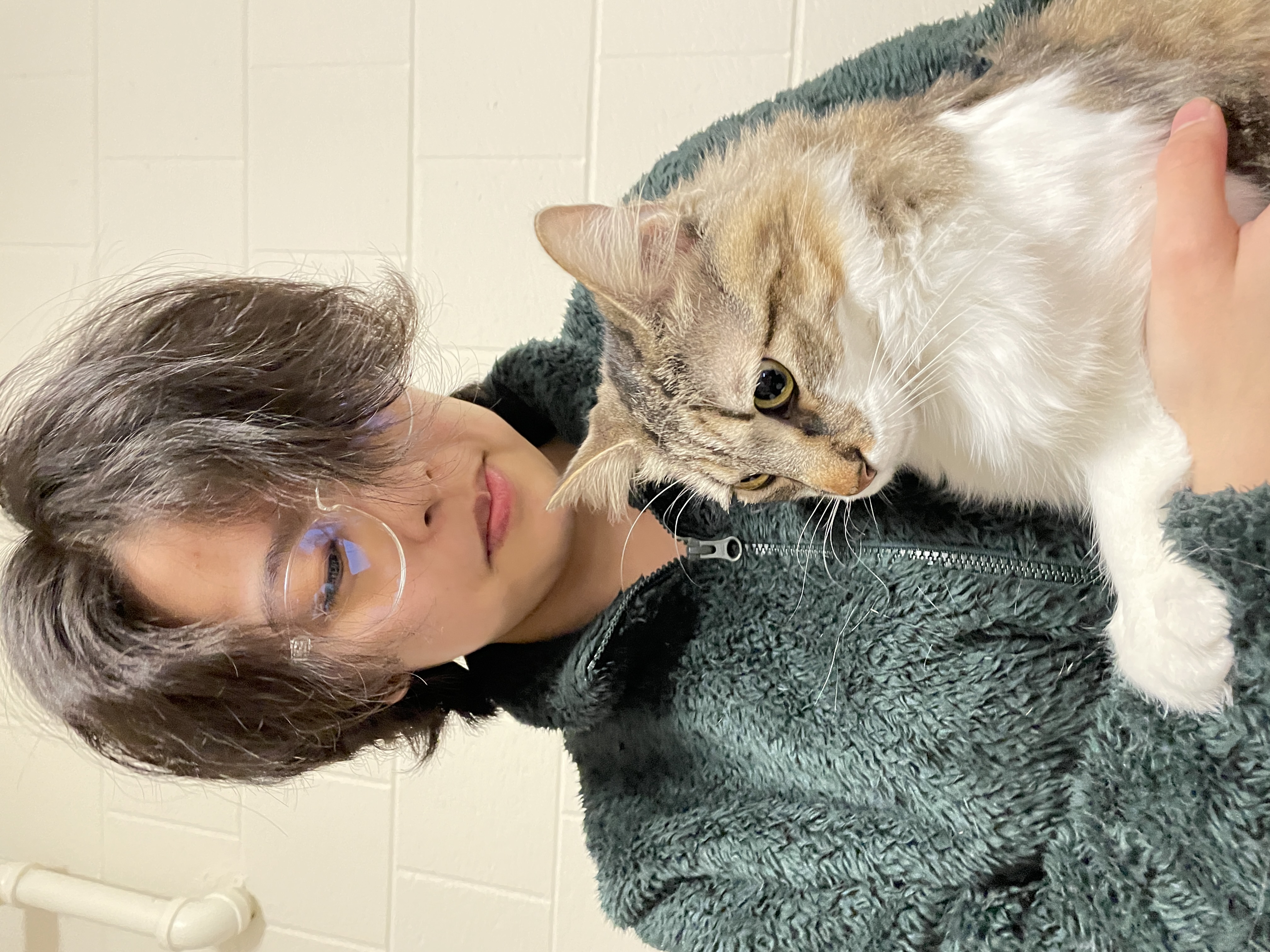 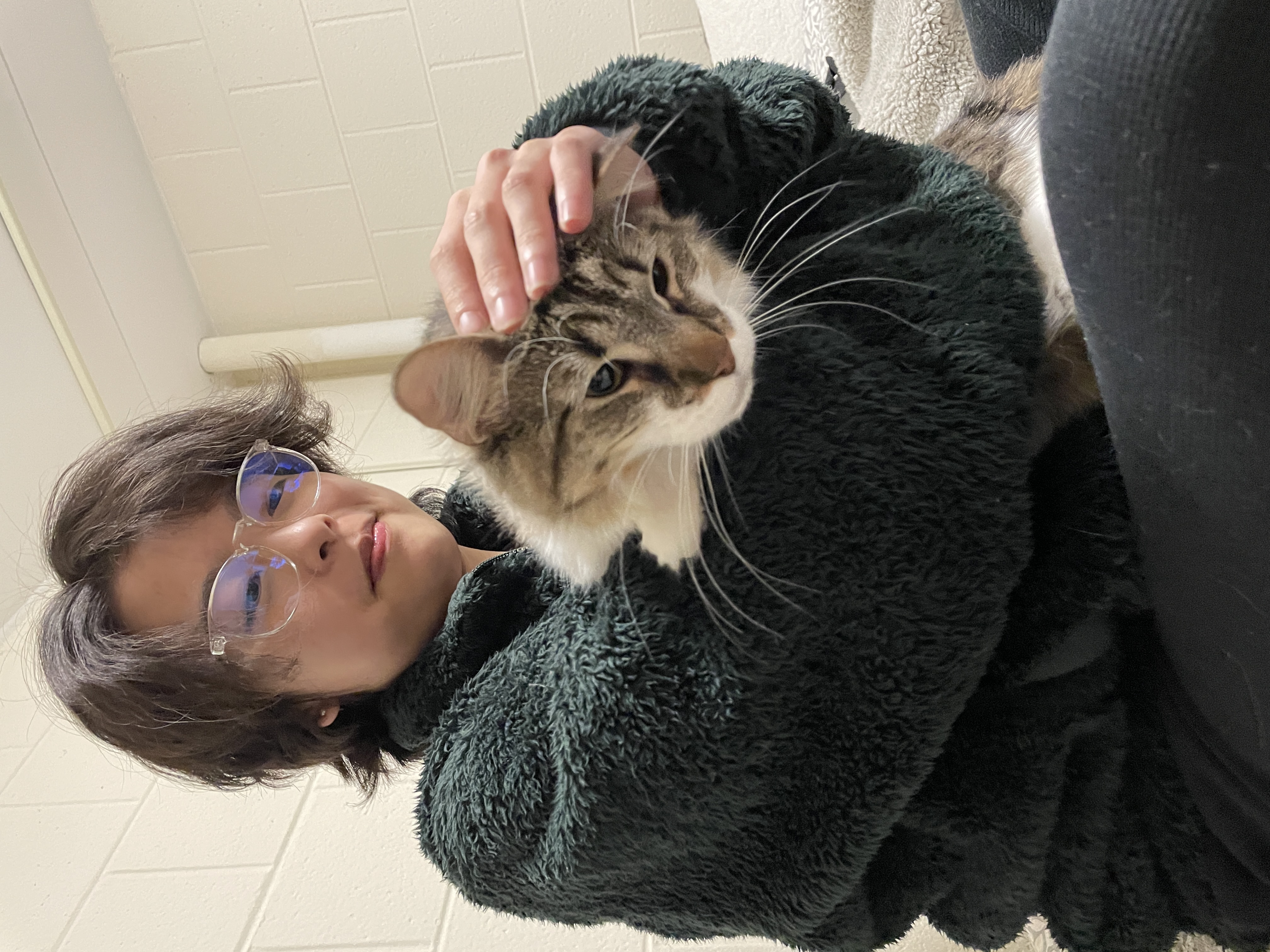 Shen believes that she and Cozy have developed a special bond fostered by their backgrounds: Cozy, a young shelter adoptee, and Shen, an international student from China.

“I’m here as an international student so I don’t have relatives living in the states, so the fact that she’s also adopted kind of connects us in that we’re growing up together,” Shen said. “I think this part is very special. It just makes me feel like we’re connected.”

Wade also reflected on the sense of mutual understanding and trust that she and Ollie developed toward each other.

“It’s so rewarding to see when he has that sort of trust in me to let me carry him around and hold him close to me,” Wade said. “There’s something so special about having a small, relatively powerless animal place so much trust and love in you. It’s really something special.”