Cat out of the bag 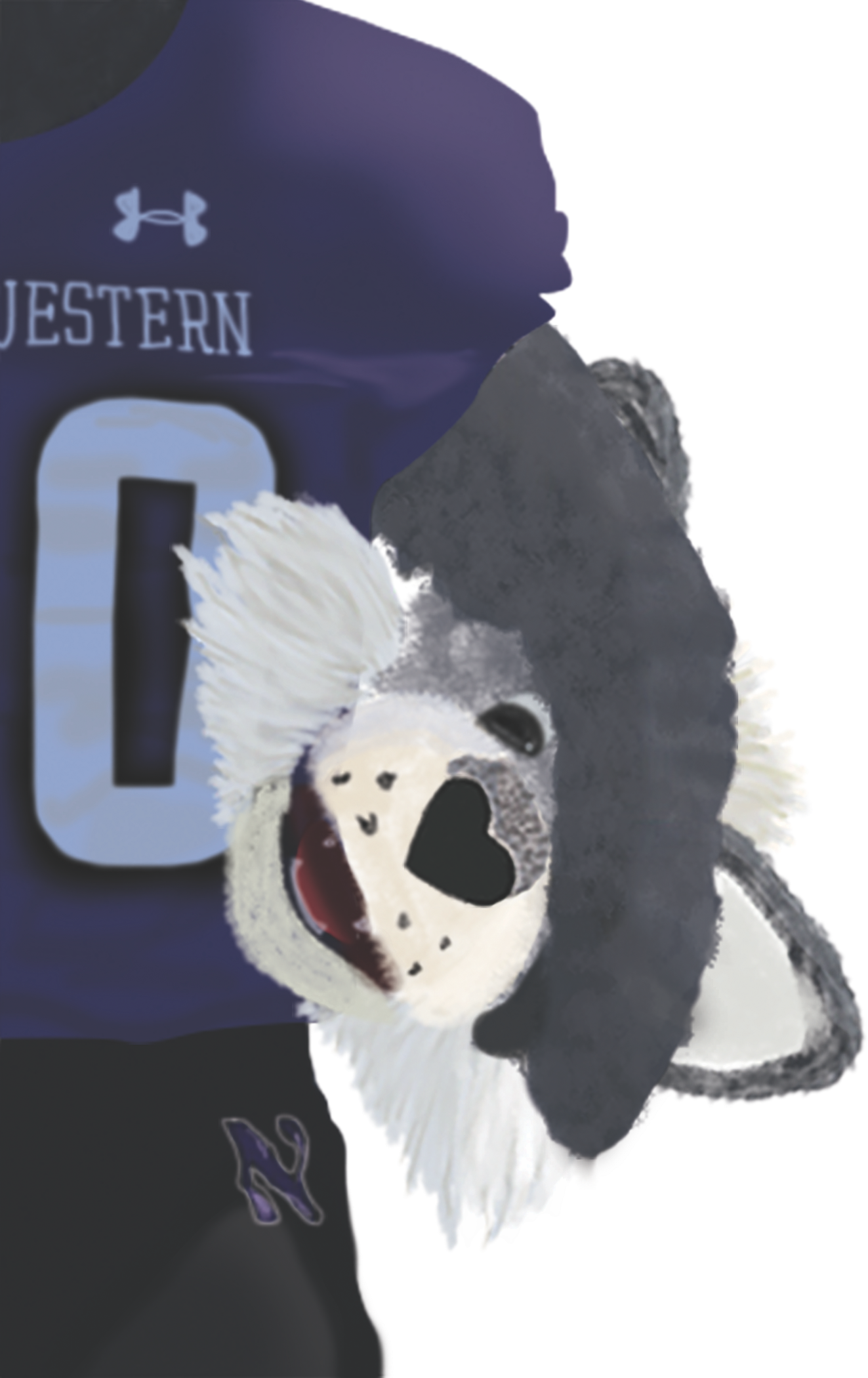 Most days, they masquerade as normal Northwestern students. They sit smugly in lecture halls, secretly aware of their covert second identities. Undercover, they appear on TV screens, students vie for photos with them and strangers cheer their name. They each lead double lives, but function as one ubiquitous campus celebrity. You may think of them as a friendly, familiar face — everyone does.

But you’ve never actually seen them. No one has. At least, not under the mask.

“The best thing about performing as Willie the Wildcat is that people come up to you, and even though subconsciously they know you’re a person in a costume they can look at you as Willie and see somebody who’s a friend,” Communication third-year Finn Murphy says. “[They] see somebody who cares and wants them to be at Northwestern and is excited to see them.”

Murphy is one of four members of Northwestern’s Spirit Squad, a branch of the athletic department that includes students who wear the famed Northwestern mascot suit and act as hype-men on the sidelines of sports events. Northwestern students have been appearing as Willie since 1947, when four students created the first suit for Homecoming.

Performing as “Northwestern’s biggest fan,” as Murphy describes Willie, is more than just posing for photo ops with fans at games. All four Squad members wear the suit interchangeably. While one student is in costume, another acts as the “handler,” assisting Willie as he interacts with fans and helping the rest of the Spirit Squad hype up the crowd.

“Basically, you’re like Willie’s personal assistant,” McCormick third-year and Spirit Squad member Charlie Chiang says. “You’re there to speak up for him, making sure Willie gets to everywhere he needs to be on time, making sure he’s got water every time he needs it.”

The Spirit Squad and cheerleading team are led by the same coach, and members attend two-hour joint practices twice a week to work on stunts. They also do weight training twice a week and attend every football game — home and away — and all men’s and women’s home basketball games.

“Sometimes it’s really hard to prioritize,” Murphy says. “We’re technically student athletes, and it’s a very similar vibe where it’s school first and then their team second and everything else is third.”

On top of his on-campus schedule, Willie manages a busy off-campus social life, attending birthday parties, weddings and events at local restaurants when requested. He also does community work, occasionally entertaining at schools and workplaces, like the Evanston Fire Department.

Willie also maintains an active social media presence, with 4,432 combined followers on Instagram and Twitter (@williewildcatNU) as of Nov. 15. The Spirit Squad uploads photos and short skits weekly on both platforms.

Murphy says that the team tries to keep Willie’s social media casual. When they’re not posting videos of the mascot’s extensive workout routine, the Squad uses the platform to emphasize support for the Northwestern and Evanston community. They document Willie’s appearances at on- and off-campus events, from Fourth of July 5k runs to the March Through the Arch.

“It’s really great to have that impact and be able to support not just athletics, but also academics and arts and extracurriculars,” Murphy says. “[Willie is] a fan of everybody and everything that Northwestern does, not just our performances on the field.”

"In each year, it's really important to redefine, 'Who is Willie? What are his core attributes?'"

Each year, the Spirit Squad hosts an information session and tryouts where students engage in a series of nonverbal communication exercises, including improvisation and dancing games. There are no requirements to become Willie, and students of any year can audition.

Chiang says that while some students come to campus interested in performing as Willie, others are recruited by the Spirit Squad at the beginning of the school year. During Wildcat Welcome, when new students learn the Northwestern fight song and alma mater, Willie secretly eyes the crowd in search of especially spirited potential new members.

Selected students receive elusive cards from Spirit Squad members, Chiang says, with a brief description of the Spirit Squad and the date of their first info session, which they are encouraged to attend to learn more.

McCormick third-year Ibrahima Bah was first introduced to the Spirit Squad after he ran the Wildcat Dash in his first year. An upperclassman Spirit Squad member gave him a card, which he says motivated his initial decision to learn more about the group.

“They were just mad cool,” Bah says. “Good vibes everywhere. So I decided to join the team.”

Before the start of classes and football season, Spirit Squad members arrive on campus early for preseason camp. Typically, this includes training led by a professional mascot from the NBA. The Squad gets performance coaching as well as “handling” advice for when they accompany Willie during his appearances.

The professional mascot helps teach the Squad how to handle common game day situations, from effectively organizing a large line of people waiting for photos with Willie to properly dealing with intoxicated fans, according to Murphy. During preseason, the Squad also creates hand signals for communication during loud events.

Though each member of the Squad has different signature moves when in the suit, the professional mascot helps them standardize their performances. Murphy likens it to acting — if two actors played the same character during one performance, their actions would have to match.

“We have a character for Willie, but Willie evolves,” Murphy says. “In each year, it’s really important to redefine, ‘Who is Willie? What are his core attributes?’”

According to Chiang, Willie is a “playful character” who may be a little mischievous but roots for all things Northwestern. Francois agrees, adding that Willie has a work hard, play hard mentality. Murphy emphasizes that Willie is everyone’s best friend. When each of them performs as Willie, their ultimate goal is to portray these qualities.

“Trying to do Willie justice is not the most difficult part, but it’s kind of a stress on me,” Francois says. “Every time we go out, we’re representing Northwestern and we’re also representing Willie, who has been around for so long. I always try to do my best when I’m performing to make it fun and make sure I’m playing my role properly.”

Of the 12 hours Spirit Squad members dedicate to their position each week, on average only an hour and a half can be spent in the suit without a break. Students typically switch off at halftime when performing at football games, and the suit is disinfected between uses. For basketball games, the same student wears the suit for the entirety of the game.

Inside, temperatures can be at least 10 degrees hotter than outside, and Spirit Squad members say the sweaty stench inside Willie’s latex head takes some getting used to. Performances are physically demanding, and some game days are easier than others.

"I always try to do my best when I'm performing to make it fun and make sure I'm playing my role properly."

While obvious circumstances like extreme temperatures impact their performances, other imperceptible factors also play a role.

“The hardest part is going to the games and feeling really happy and really hyped, but maybe you’re not feeling that way,” Chiang says. “Especially in the winter with seasonal depression or midterm season rolling around, you never just instantly have it. It’s definitely something you have to turn on, which you just have to get used to.”

Despite these off-days, each member remains passionate about performing. Chiang recalls posing for photos with a fan who persistently asked if Willie would date her. Francois chuckles at the memory of face-planting during his first-ever away basketball game — he impulsively threw himself into an over-confident back flip — before clarifying “I didn’t mess up, Willie messed up!”

The Spirit Squad has witnessed many historic Northwestern sports moments over the years. Murphy can remember exact scores of standout games, from a 66-63 close women’s basketball victory over Boston College to a triple overtime win against Michigan State football. Witnessing the women’s basketball team clinch the 2019 Big 10 Championship title, he says, trumps all.

Some Spirit Squad members are open about their role as Willie. Still, they never reveal which student is in the suit at any given time — members say that would ruin the authenticity of Willie’s character.

Spirit Squad students have experienced varying levels of recognition for their performances. While Murphy publicly speaks about the Spirit Squad’s double life as Willie, Chiang keeps it under wraps. Only his girlfriend and parents know where he disappears to at games. Regardless, members say anonymity is not what makes being Willie a special experience.

“I just want to make sure everyone is having a good time,” Chiang says. “And, it doesn’t hurt that he’s college’s sexiest mascot.”