Last fall, Weinberg third-year Julia Greenberg walked to her game design computer science class with two male classmates. On the walk, she often felt anxious, like she knew less about the subject than them, even though that wasn’t the case.

“It just felt like I was falling behind, which wasn’t necessarily true,” Greenberg says. “It also can be a little intimidating to ask questions when you’re a woman because you don’t want to be perceived as dumb, and you don’t want to mess up.”

Greenberg had heard about imposter syndrome at Northwestern but says she never experienced it herself until she declared a computer science major.

“I was suddenly with a bunch of people who may have been coding since they were 12 or 13, and it’s also their hobby and everything they do,” Greenberg says. “They are totally enthralled in it, whereas I feel like I knew it was something I’d be interested in studying, but it wasn’t necessarily something I was always going to be wanting to do outside of class.”

“There’s huge issues in terms of the makeup of the faculty, and the faculty are well aware of that and kind of desperate to try and fix that,” Horswill says. “But there’s a lot of competition for hiring faculty. It’s just really, really hard.”

There are six new female faculty members in the department, which Sood says is an important step toward diversifying the major and making it more inclusive. She believes it is crucial to have role models for students of all identities.

Assistant Professor of Computer Science and Learning Sciences Marcelo Worsley also believes that more representation for marginalized communities is needed in the department. In the future, he wants to see professors that are jointly appointed between computer science and an ethnic studies program at Northwestern.

“I just think it’d be really neat to see what kind of new cross-disciplinary knowledge we as a research community can start to grow,” Worsley says.

“There’s huge issues in terms of the makeup of the faculty, and the faculty are well aware of that.”

Horswill and Sood are the professors for CS111: Fundamentals of Computer Programming I, an introductory class that all computer science majors are required to take. They have attempted to increase accessibility for students of all skill levels by making changes to beginner computer science courses.

“Figuring out how best to serve the students who aren’t coming to computer science, or who aren’t having as easy a time with it — for whatever reason — is, I think, certainly the most important question in terms of curriculum design, at least for the introductory computer science stuff,” Horswill says.

To make her course more inclusive, Sood starts the first CS111 class of every quarter by explaining that, while questions are encouraged, they must be “genuine” — students are not permitted to ask questions or make statements in class that show off their programming skills or experience.

“If I say from the beginning that you can’t show off in the room and that my favorite question is ‘I’m confused,’ it totally changes the vibe in the room,” Sood says. “Then people are open to saying ‘I don’t know what you just said,’ and nobody shows off.”

Greenberg appreciated this policy in CS111, especially because she did not declare a computer science major until fall of her second year and was already feeling behind. 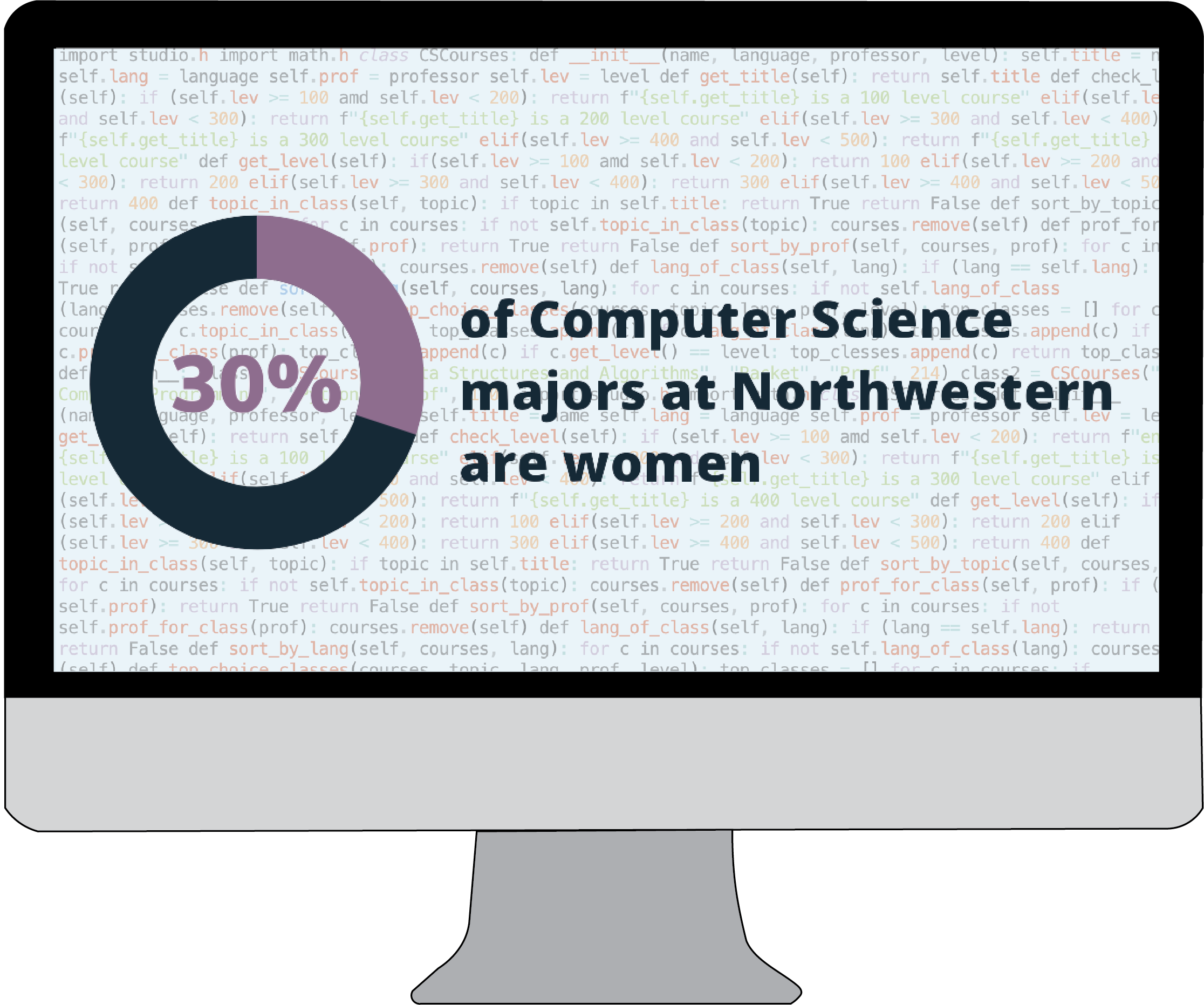 There are also a variety of computer science groups on campus that help build technical skills and foster community outside of the classroom. McCormick fourth-year Megan Yaur is one of the co-presidents of Women in Computing (NU WiC), an identity-based computer science organization at Northwestern.

Yaur appreciates that NU WiC gave her the opportunity to work with other female-identifying students who felt out of place in their computer science classes.

“During classes — especially in the intro ones — it’s so big that it’s hard to meet people,” Yaur says. “As you get higher and higher up in the major, there is less female representation in those classes.”

Sood supports NU WiC and other identity-based campus organizations because they provide a space for students to bond with people who share aspects of their identity. Despite these efforts, the computer science professors still feel that more changes are necessary to create a more diverse environment in computer science classes.

Worsley is currently serving as the principal investigator for a research lab called Technological Innovations for Inclusive Learning and Teaching, housed on the third floor of Mudd Library. The lab offers learning opportunities for students in underserved communities and aims to frame computer science in a way that connects with its participants.

“Whenever we talk about women and underrepresented groups in computer science, everyone always wants to know,‘Why? Why is it like this?’”

Sood also expressed that she is prioritizing actionable steps the department can take to close the opportunity gap.

“Whenever we talk about women and underrepresented groups in computer science, everyone always wants to know, ‘Why? Why is it like this?’” Sood says. “It’s something that’s really hard to pin down, but I think all of our focus should be on how to change, how to improve the environment and the culture and just make it a more welcome and inclusive environment.”