Designing, building and racing to the finish line: a deep dive into NU Baja

“Imagine a go-kart, but with beefy suspension and a roll cage, and you and your friends all built it yourselves,” said McCormick fourth-year Mady Corrigan, one of the co-leads for the electronics subteam.

Each year, NU Baja has one chance to race against other universities in an official match. These competitions are hosted by SAE International, an association of more than 128,000 engineers worldwide.

Last spring, NU Baja had its best performance in its over 30-year-long history. The car they designed and built, Dory, finished eighth place out of its 57 competitors. The group hopes its new car Toro will place even higher at this year’s tournament.

McCormick fourth-year Jose Amador, the team’s chief engineer, estimated that it takes thousands of hours of work – involving every member of the team – to make a single car. He said that team leaders put in at least five hours of work each week.

All team meetings and workspaces take place inside of Ford, Northwestern’s six-story engineering design center. The team designs and builds most of their car’s components in the Segal Prototyping and Fabrication Lab, commonly known as the Shop, and assembles their car in the auto bay.

“During the busy season, there is always someone working in Ford,” Corrigan said.

Amador said the team works at night and over the weekend to finish building their cars on time. “My most important key is the one to the Shop that grants us our after-hours access,” Amador said. 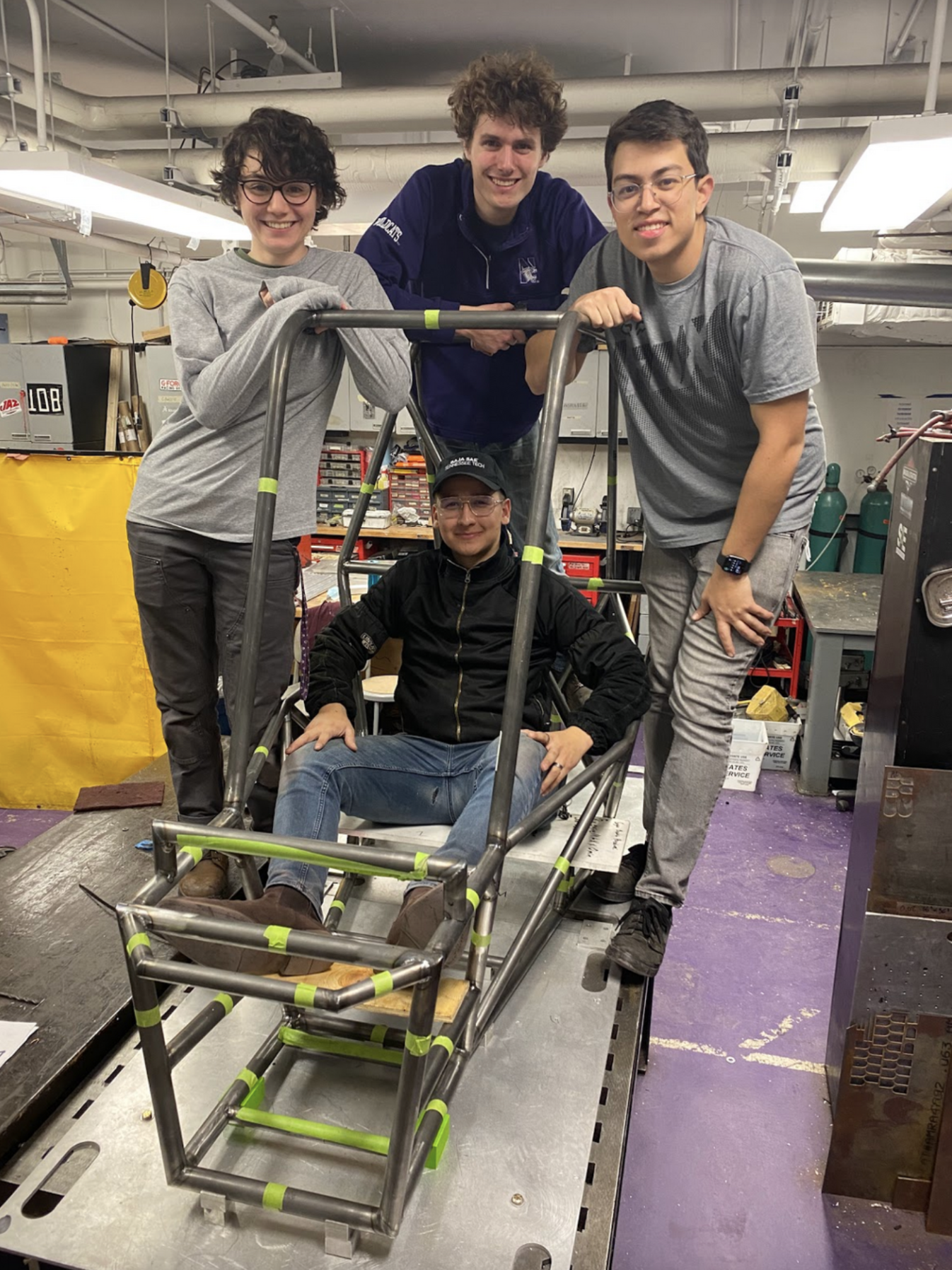 On Feb. 4, 2022, 33 members of NU Baja raced Dory at the Blizzard Tournament, an off-season competition hosted by the Michigan Tech University Baja team.

At the competition, it was about 20 degrees out. McCormick first-year Michael Miller described the race track as “mega snow on top of mega ice.” Despite the cold, he had a great time at the competition.

One of the highlights of Blizzard, according to Amador, was that everyone who wanted was given a chance to drive in the race. This opportunity “to actually drive the thing you make” was why Amador originally chose to join Baja.

Driving in Baja races is a unique experience, especially since crashing is common on the track’s rough terrain.

The race is determined by how often the car breaks, said McCormick fourth-year Cameron Mastoras, Baja’s electrical co-lead and operations director. Team members are given the opportunity to repair the car during the race, but each repair costs the group precious time. As a result, Mastoras said the car’s durability and shock-absorbing components are more important than speed.

There were five or six times during Blizzard that the team needed to actively fix something, Mastoras said. One of the advantages of racing their old cars from previous seasons is that the team had already “broken all the stuff that’s going to break and fixed it together,” he said.

Even though teams can repair their cars mid-race, that doesn’t mean they’ll win. Some NU Baja members were worried the car wouldn’t be able to finish the race after it tumbled off a ramp more than 10 feet tall, snapping its half shafts.

“Everyone was staring at it wondering ‘God, what do we do with this?’” Corrigan said.

NU Baja members worked together to remove the car’s components, weld the broken parts back together and put the car back on track. Amador estimated that the entire process took around half an hour.

Corrigan said that, although she was worried they wouldn’t be able to fix Dory, she wasn’t worried about borrowing equipment. She added that Baja teams tend to help each other out when they need it.

“Some teams show up with just a frame and teams with extra people will help them put [the car’s] components on the frame,” Corrigan said.

The NU Baja team will leave for the spring tournament in Tennessee on May 11 and return on May 16. Throughout the four day tournament, the car’s maneuverability, acceleration and other metrics will be tested in different racing events.

In preparation for the tournament, the team is aiming to cut Toro’s weight significantly, Amador said.

Other team members, like Corrigan, are brainstorming new features that could give them a competitive advantage. She plans to add sensing systems to the car, like a fuel gauge, as well as a user interface.

Once the team finishes every component, assembles the vehicle in the Ford auto bay and ensures the car meets all of the tournament’s technical and safety requirements, their last step is to test the car at the spring tournament’s various racing events.

Racing is not a cakewalk. According to Amador, large obstacles and jumps can give the driver whiplash and an overall feeling of soreness that lasts for several days. Still, it’s “a price that is certainly outweighed by how awesome it is to race,” Amador said.

Amador is especially looking forward to driving during the endurance race, a four-hour wheel-to-wheel racing event.

“It’s such an amazing feeling to get out onto the track and see the project you spent the whole year building in action,” he said.

Preparing for Next Season

Baja gained around twenty first-year members in Fall Quarter. Training these new members to use Baja’s essential machinery, software and other tools is one of the team’s main goals this season.

Mastoras is especially interested in teaching the first-years to use Computer-Aided Design (CAD), a software tool the team relies on for creating 3D models and collaborative designing. He views CAD as “the language a mechanical engineer speaks” because of how extensively it’s used in the industry.

One of the training events he designed in the fall was a Hot Wheels competition. Each underclassman created their own design for a mini race car using CAD and 3D printed the components.

“At its most basic, you could make a rectangle,” Mastoras said. Instead, the underclassman made funny shapes, sleek streamlined designs and added text to their cars’ exteriors.

Two cars raced at a time on the Hot Wheels tracks which stretched from Mastoras’s upstairs porch to a table in his backyard.

“I absolutely loved the event,” Miller said. “It was the first get together where we all had an event to participate in and I think it brought us all closer together.”

Mastoras views the team’s emphasis on building community and having fun as a core aspect of their culture.

“We just fuck around and don’t take ourselves too seriously,” Mastoras said. “There’s something about Baja that just lends itself to that. We’re building stuff that’s bound to break.”