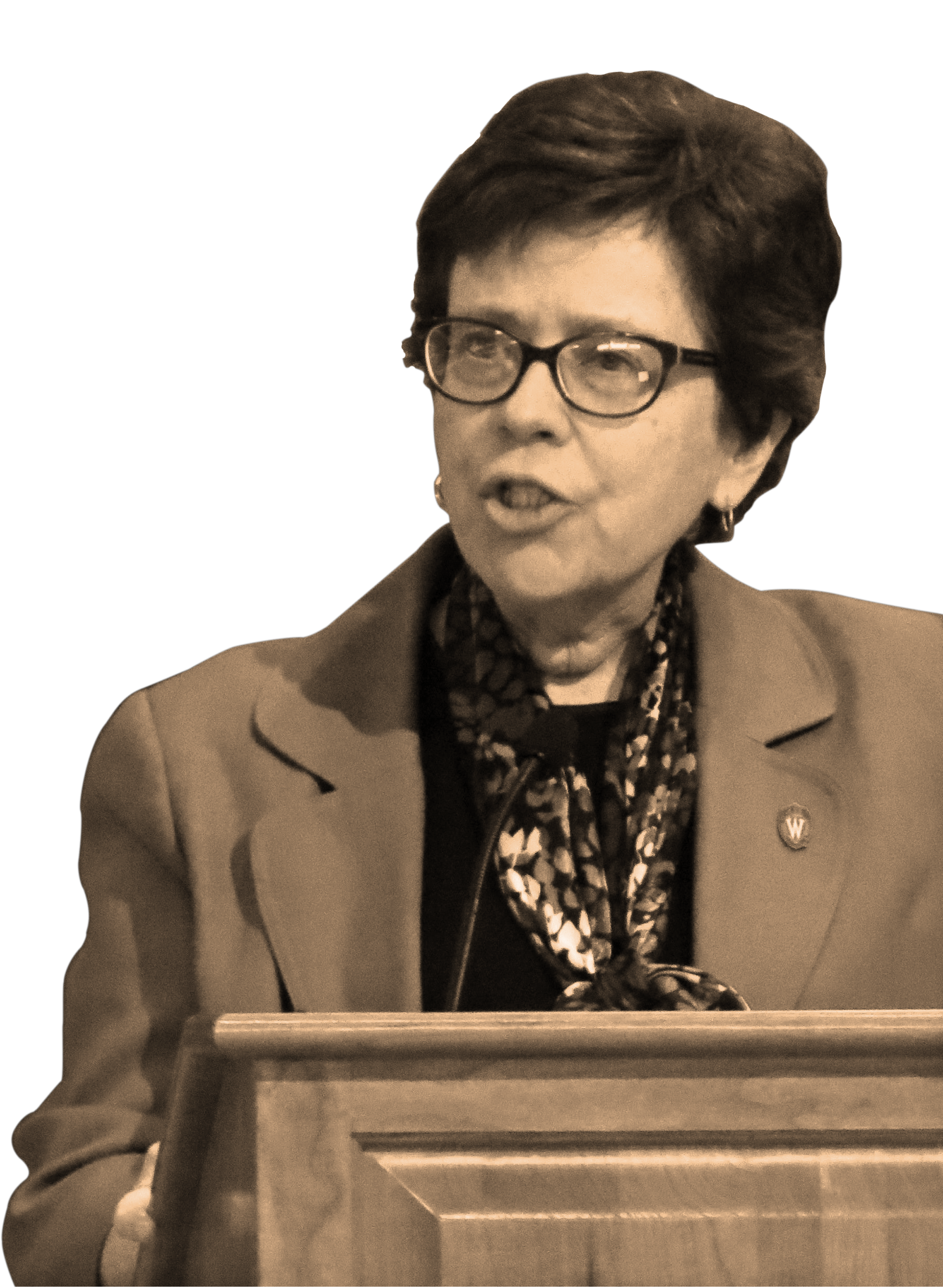 Photo by Dana Kampa / Courtesy of The Badger Herald

Editor’s Note: Former UW-Madison Chancellor Rebecca Blank announced on July 11, 2022 that she will no longer be Northwestern’s next president. Blank stepped down before her term began due to a cancer diagnosis.

When Native student Giselle Monette met with UW-Madison Chancellor Rebecca Blank to discuss removing the Abraham Lincoln statue on campus, Blank reportedly said Lincoln “could have killed way more [Native people] than he did” when he ordered the hanging of 38 Dakota men, the largest mass execution in American history.

“She was like, in the grand scheme of things, there were like 500 Natives that he could have hung that were guilty of whatever crime she believes they committed,” said Monette, a Turtle Mountain Ojibwe.

Blank said to justify the removal of the statue, students would have to first educate UW-Madison’s stakeholders and the public on Lincoln’s history with Native Americans.

Monette responded with how small the Native population at UW-Madison was, how little support Native students have and how much they struggle just to be seen. Blank didn’t seem to be moved.

“She didn’t empathize with any of those things,” Monette said. “She just ignored them. I just found that so psychopathic.”

From Madison to Evanston

On October 11, 2021, Northwestern announced Blank, a former Northwestern professor of 10 years, would be its new president. In response, student activists at UW-Madison mobilized to educate Northwestern students about Blank’s history at the school.

Monette said she’s worried about the consequences of telling her story, but she believes that it's important to share.

“Somebody needed to warn Northwestern,” Monette said. “The conversations everyone’s having – we’re like, we have to tell Northwestern about Becky before she gets there. We can’t let them go into this blind.”

In that meeting with Blank, Monette told the chancellor about other anti-Indigenous decisions Lincoln made – history that was taught in the American Indian Studies classes Monette took at UW-Madison.

“Somebody needed to warn Northwestern.”

She told Blank that Lincoln signed an act forcing Native people off their land and that he oversaw the transcontinental railway’s construction, which caused the disappearance of resources Monette’s ancestors depended on. But Blank, Monette remembers, only talked about the Dakota 38.

The statue of Lincoln overlooks much of UW-Madison’s grounds and sits atop Bascom Hill, the symbolic center of the university’s campus. One of the demands made by the Wisconsin Black Student Union (WBSU) in the wake of 2020 Black Lives Matter protests was to remove the statue. Monette was invited to the WBSU meeting with Blank as a representative of Wunk Sheek, an Indigenous organization on campus.

“There are Native students that will talk about, like, they avoid walking up Bascom, they avoid looking at [the statue] because they don’t like this symbol of hatred for us, this symbol of pain in our community that goes back generations,” Monette said. “I think part of being Native is this genetic memory, this kind of discomfort that you have based on what your ancestors have been through.”

“It kind of messed me up a little bit,” said Monette, who stepped away from activism in part because of the meeting.

The statue remains on Bascom Hill.

Changes under the chancellor

Blank’s supporters say she is an active listener and a strong leader. To the approval of student activists, Blank implemented Bucky’s Tuition Promise, a program offering free tuition to Wisconsin residents whose households make less than $60,000, and commissioned the UW-Madison Public History Project, an examination of UW-Madison’s racist and prejudiced past.

“Managing academics has often been likened to herding cats, and for good reason … she’s good at herding cats,” said Jeffrey Smith, an economics professor at UW-Madison.

Northwestern Native American studies and journalism professor Patty Loew said she was impressed by Blank’s graciousness during a tribal summit, where she hosted Wisconsin’s 12 Native nations. When Blank established a Director of Tribal Relations in the Department of University Relations, Loew saw this as an acknowledgment of Indigenous sovereignty.

“I would describe her as a really good listener. If she continues on that path, really listens to the students here – who are super smart, passionate – she listens to the faculty and deans, she’ll do just fine,” said Loew, who taught at UW-Madison before Northwestern.

Blank also received praise for the removal of Chamberlin Rock, considered a symbol of racism because a former nickname contained the N-word. WBSU partnered with Wunk Sheek to fight for the removal, another one of WBSU’s demands alongside removing the Lincoln statue.

While some student activists give Blank credit for removing the rock, many say outside pressure from students and concern for optics resulted in the removal, not a genuine desire to seek racial justice on campus.

“This rock being removed is a small step because the university has a lot more that needs to be done when it comes to diversity and race,” then-president of WBSU Nalah McWhorter said last year.

Monette said student leaders shifted their focus from the Lincoln statue to Chamberlin Rock because they felt it was the only viable option.

“By the time it got removed, I was so burnt out I didn’t even go to the removal, which I regret,” Monette said. “What is the purpose of doing all of this and pushing through if administration will not acknowledge our knowledge, our presence, our feelings and our desires to make campus better?”

According to student leaders and some former faculty, Blank often invalidated their concerns.

“We’d go with an issue to her or her staff, and they would claim it’s a non-issue,” said Max Prestigiacomo, a current student at UW-Madison and a former Alder of District 8, which contains most UW-Madison student residences. “So there’s a lot of that. It’s gaslighting. Very much gaslighting.”

Sara Goldrick-Rab said that as a professor at UW-Madison several years ago, she once brought “hard data and evidence” that students were experiencing homelessness and food insecurity to Blank.

“At that meeting, I brought a currently homeless student with me,” Goldrick-Rab said. “Yet [Blank] told me we didn’t have this problem at the university. She told me that while the homeless student was in the room.”

During her time at UW-Madison, Goldrick-Rab felt frustrated with Blank’s leadership, which ultimately led to her departure after a censure for tweeting at incoming freshmen.

Goldrick-Rab called Blank “a twin” of Northwestern President Morton Schapiro, who she knows of through academic circles.

“I suspect the Board [of Trustees] thought, ‘Morty did a great job, Morty wants to retire, we’re doing more of the same, let’s hire Becky Blank,’” Goldrick-Rab said.

Current District 8 Alder and UW-Madison student Juliana Bennett said she appreciated that Blank agreed to help commission a study on affordable housing on campus. However, Bennett said Blank did not seem to understand how unaffordable UW-Madison’s housing is. Student housing at UW-Madison ranges from $6,200 to $9,200 per academic year.

“[Blank] told me we didn’t have this problem at the university. She told me that while the homeless student was in the room.”

Graduate students also say Blank was unreceptive to their demands to reduce fees separate to tuition, reportedly telling them other people on campus wish their salaries were increasing as fast as graduate students’ salaries are.

The current chair of UW-Madison’s student council, Adrian Lampron, said they are certain Blank is sometimes “willfully ignorant” to issues. Lampron said Blank misgendered them the last time they met. They also said that Blank said she was unaware anti-Asian hate incidents rose on campus amid the pandemic.

“When Chancellor Blank said she was not aware of these hate incidents, it’s like, nobody cares about us,” said Brian Li, a Chinese international student who was on UW-Madison’s student council in 2020. “If they do, why don’t you stand up and make us feel supported?”

Blank also has a history of being unreachable when students – particularly students of color – wish to meet with her.

The Black Voice, UW-Madison’s Black student paper, was left out of a press conference Blank held with UW-Madison’s two other student-run papers. A university spokeswoman, Meredith McGlone, apologized for not inviting The Black Voice.

The Black Voice was later granted an interview with Blank. Chelsea Hylton, then co-editor-in-chief at the paper, asked Blank why she was not working to strengthen her relationship with students, particularly Black students and Black student organizations.

“That isn’t my job, but that’s someone else’s job,” Blank said in the recording published by The Black Voice.

Nile Lansana, then co-editor-in-chief alongside Hylton, said that interview was the first time he talked to Blank, which he felt showed how inaccessible she is. Lansana left the interview feeling frustrated and disappointed.

“I felt like it was clear to me that Becky’s main priorities were not the students,” Lansana said.

Vice Chancellor of Student Affairs Lori Reesor maintains students have been at the “heart and core” of Blank’s decisions and said Blank can “navigate diverse constituent groups to advocate on behalf of students” in an email.

Former chair of UW-Madison’s student council Matthew Mitnick said Blank abruptly canceled meetings with student council after learning BIPOC Coalition, a student-run racial justice group at UW-Madison, would be speaking ahead of her. Blank refused to meet with the BIPOC Coalition amid repeated demands during the 2020 Black Lives Matter protests. She later expressed regret in a Badger Herald interview, suggesting she was limited by virtual meetings but also claiming student groups had little interest in talking and were “mainly just mad.”

“I suspect the Board [of Trustees] thought, ‘Morty did a great job, Morty wants to retire, we’re doing more of the same, let’s hire Becky Blank.’”

“Becky basically considered having one meeting with a BIPOC student group, not even BIPOC Coalition but with Black Student Union, as basically having filled her quota to talking to Black and brown students for the year,” said Tarah Stangler, a co-founder of BIPOC Coalition.

Blank later committed to meeting with BIPOC student groups twice each semester but has not met with BIPOC Coalition since the promise was made during their first meeting in October 2020.

Megan Spielbauer Sandate, a co-founder of BIPOC Coalition, said Blank called students “one of my many stakeholders,” which she thought was “inherently messed up.”

“We were told we were supposed to pick and choose what we wanted to solve,” Spielbauer Sandate said, adding: “To witness that and experience that frustration and to watch people make themselves smaller, I know that really hurt me and it really hurt them.”

When Monette left the Lincoln statue meeting with Blank, she was struck by Blank’s focus on how university shareholders would view the statue removal. Monette said Blank told her she could not jeopardize millions of dollars a year coming from shareholders of the university.

“The thing about Rebecca Blank that I learned during this meeting is she is just 100% financially motivated,” Monette said. “And I guess that is her job description as chancellor.”

The chancellor’s job description is one thing administrators and students seem to agree on.

“I think it’s important to remember that one of the chancellor’s main jobs is to increase the financial revenues for the university to improve campus,” Reesor wrote in an email, adding: “Everything is about serving our students to create a world-class university where they can have the best experience possible. That’s what drives Chancellor Blank.”

“I think Becky’s about the bag.”

If Blank is paid at the same rate of current president Morton Schapiro, who was paid $1.9 million in 2018, her salary will likely triple at Northwestern. Lansana believes that’s why Blank is leaving UW-Madison.

“I think Becky’s about the bag,” Lansana said.

Monette said the only way Blank will be receptive to any change is if students can connect their concerns to money and “stone-cold facts.”

“You can’t be emotional with her,” Monette said. “Her worry is finances. Her worry is not feelings.”