Kaniya: On being the first 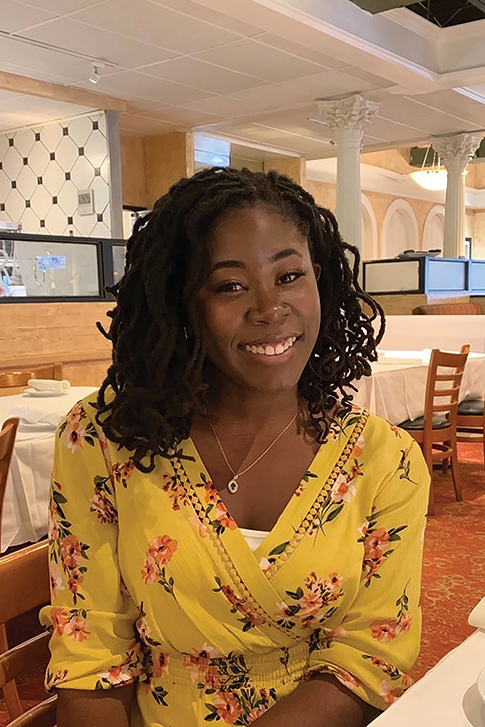 The summer before her first year, Kaniya Hester often found herself combing through pages of Reddit and College Confidential for college tips and advice columns. In between these deep dives, she received an email from Student Enrichment Services (SES).

She skimmed through the text when she was confronted with a concept she hadn’t read about before: first-generation student. The first in your family to go to college. A part of Hester’s upbringing that she had never named but whose implications she was starting to understand.

“It was nice to have a label to really describe the experiences I was having and the challenges I was facing, because when you have language to describe what you’re going through, it can be validating and pretty powerful, too,” Hester says.

When applying to college, Hester knew she wanted to leave her hometown of Indianapolis and become a speech language pathologist. But when the pandemic hit, she started reevaluating her career options, adding an economics major and exploring the business world.

Before she considered economics, Hester was regularly confronted by the hidden curriculum — the unspoken behaviors of students looking to get ahead in their academics, internships and careers. These behaviors were something she thought she had learned in her College Confidential sleuthing sessions. But when she switched to business, she found a new world of more unwritten rules and concepts that others expected her to know.

“People here know about things like consulting and different career fields that I had no clue about until this past summer,” Hester says. “And I think that probably is a result of me being from a background where you don’t have as much exposure to different sorts of jobs, especially in business and finance.”

Higher education, Hester explains, is riddled with expectations that can go uncommunicated to first-generation students. Small gestures, such as writing thank you letters after job interviews or developing connections with professors who can provide future letters of recommendation, are the kinds of insider information that the hidden curriculum provides to those with access to it.

“It was nice to have a label to really describe the experiences I was having and the challenges I was facing, because when you have language to describe what you’re going through, it can be validating and pretty powerful, too."

Today, Hester is involved on campus as a member of the Minority Business Association and a research team leader. She helped start a Northwestern chapter of the National Student Speech Language Hearing Association (NSSLHA) for human communication studies majors. In her two years on campus, she’s learned the unwritten rules. And that isn’t sheer coincidence.

The email that taught Hester the word “first-generation” was the same email that helped her work against the statistics that come with it. It provided her with a link to an application for Compass, a mentorship and leadership program for FGLI students.

SES director Kourtney Cockrell says that the programming and resources in SES were created as a “first-stop shop” for first-generation students. Specific application and selection-based programs, like Compass and Knight Community Scholars, identify FGLI students in each incoming class from a list provided by Northwestern’s financial aid department. Cockrell says these programs hand select students so they can be proactive about meeting their needs.

After she was accepted to Compass, Hester was matched with a mentor and went to workshops that taught her a host of skills, from completing internship applications to establishing credit independently. SES even helped Hester secure a laptop for her studies, which she has now been using since her first year.

“I have only good things to say about Compass,” Hester says. “I think had I not had a first-generation space as a freshman, I would probably be describing more negative experiences.”

Cockrell describes being first-generation as an “invisible identity.” It’s not something that can be directly seen and, according to Hester, it’s a label that many students on campus may not have encountered before.

“If I just tell someone on the street or see someone walking by at Northwestern and say, ‘I’m first-generation,’ there’s a chance they may not even know what that means,” Hester says.