From fairy lights to plastic ivy to pictures from home, dorms at Northwestern University have their fair share of decorative staples. But some students have moved beyond the ordinary collection of items by buying (or making) unique conversation pieces to display. From an in-dorm cinema fort to a poster of Kim Jong-un, these are the stories behind seven Northwestern first-years’ unconventional dorm decorations. 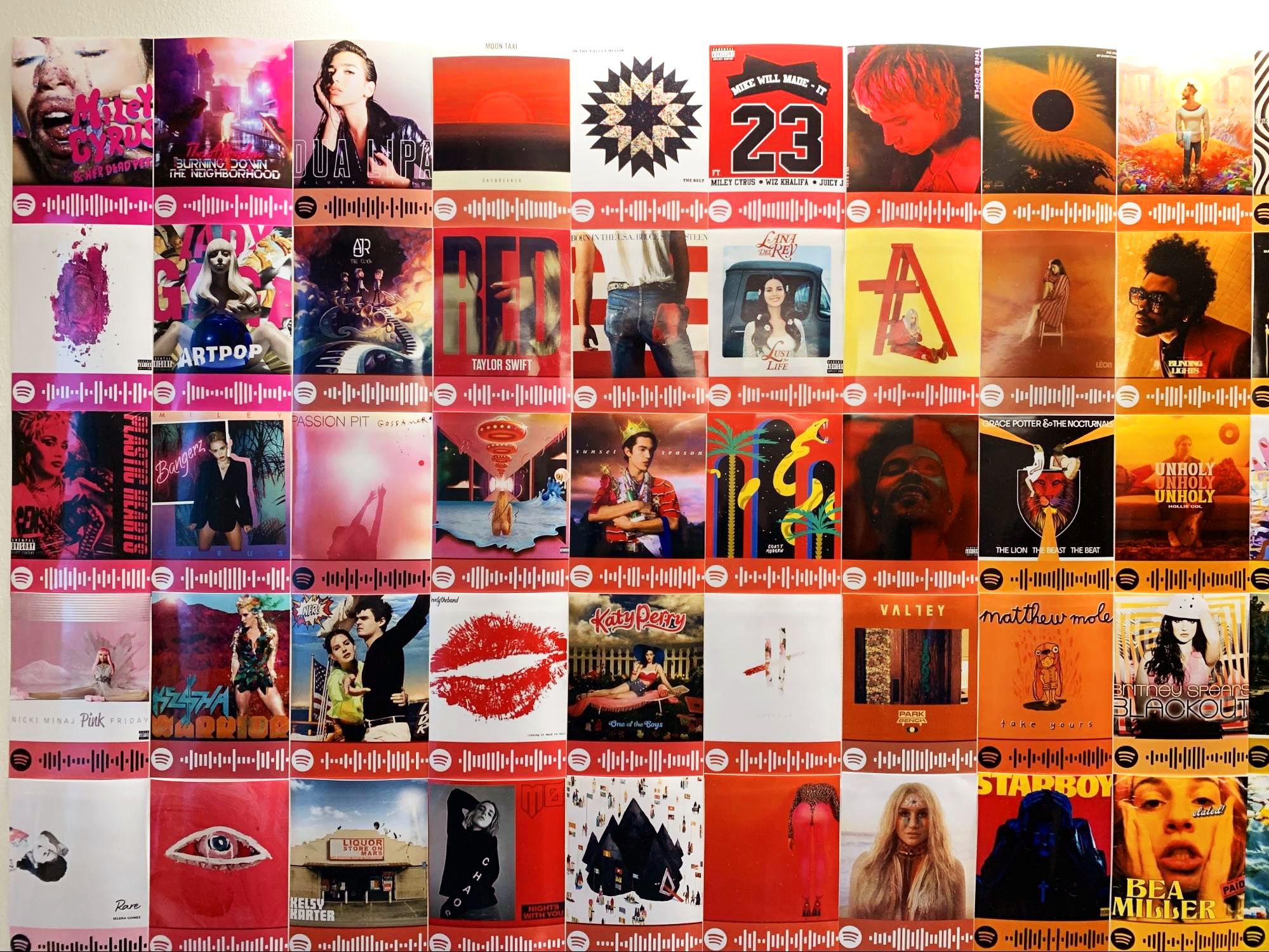 Stretching across the wall of Weinberg first-year Ben Lankfer’s 560 Lincoln St. dorm room is an eye-catching rainbow collage. The collage is composed of 125 handpicked album covers from a vari- ety of artists, and each image is paired with the Spotify scan code of a corresponding song.

After seeing other Spotify code projects on TikTok, Lankfer says he was inspired to create a display using his own favorite songs. Pop artists dominate the wall, with Miley Cyrus and Taylor Swift as standouts.

Lankfer says the poster is a particularly personal decoration.

“It’s not just a bunch of album art,” Lankfer says. “It’s something special to me and not something that everyone has.” 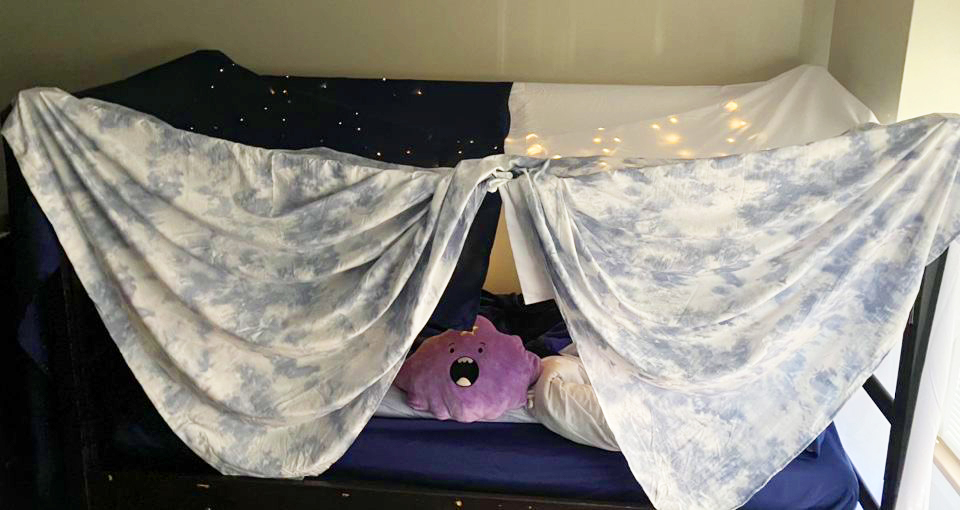 What do you get when you combine an empty dorm bed with extra sheets? An in-dorm cinema fort, according to Communication first-year Nozizwe Msipa.

Msipa, who lives in an Allison Hall double-turned-single, transformed her room’s unused bed into any child’s dream fort, complete with fairy lights and an Adventure Time Lumpy Space Princess plush.

“I had two beds and lots of sheets, and I was just struck by inspiration,” Msipa says. “There was nothing telling me no.”

Since she uses the fort on most days to watch movies, Msipa says she plans to keep the fort up for the rest of the quarter and will continue to order more pillows and lights to beautify her personal hideaway. Lined up against the back of SESP first-year Leah Ryzenman’s room in Ayers Hall are two nightstands, a fridge and… a bowling ball? Neither Ryzenman nor her roommate bowl, but on a trip to Goodwill, Ryzenman’s roommate decided to add an uncommon decoration to their dorm.

When people ask why she keeps it in her dorm, Ryzenman typically responds with a simple reply: “Why not?” 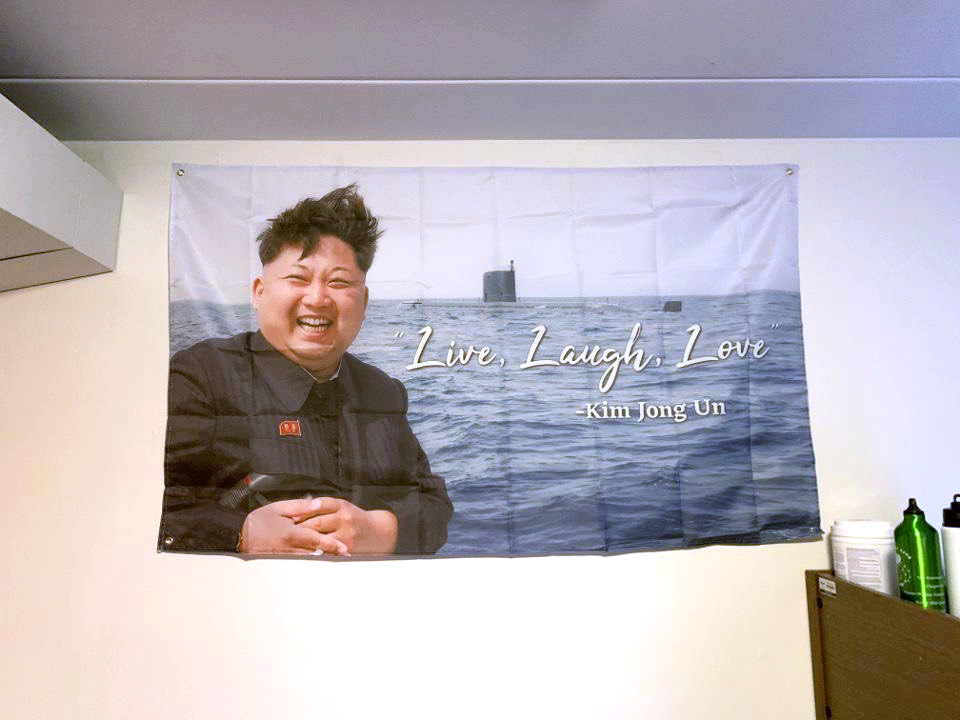 Strolling past the front of South Mid-Quads at night, you might spot a smiling face peeking through the window: the face of North Korean dictator Kim Jong-un. Kim stands in front of an ocean, beside curvy lettering that reads “Live, Laugh, Love.”

This curious image is featured on a flag owned by Medill first-year Hank Yang, who received it as a birthday gift in January. Yang says his side of the room used to be pretty bare, but now the decorative flag takes up plenty of wall space.

“Every morning I wake up and see Kim Jong-un’s wonderful smile,” Graham says. 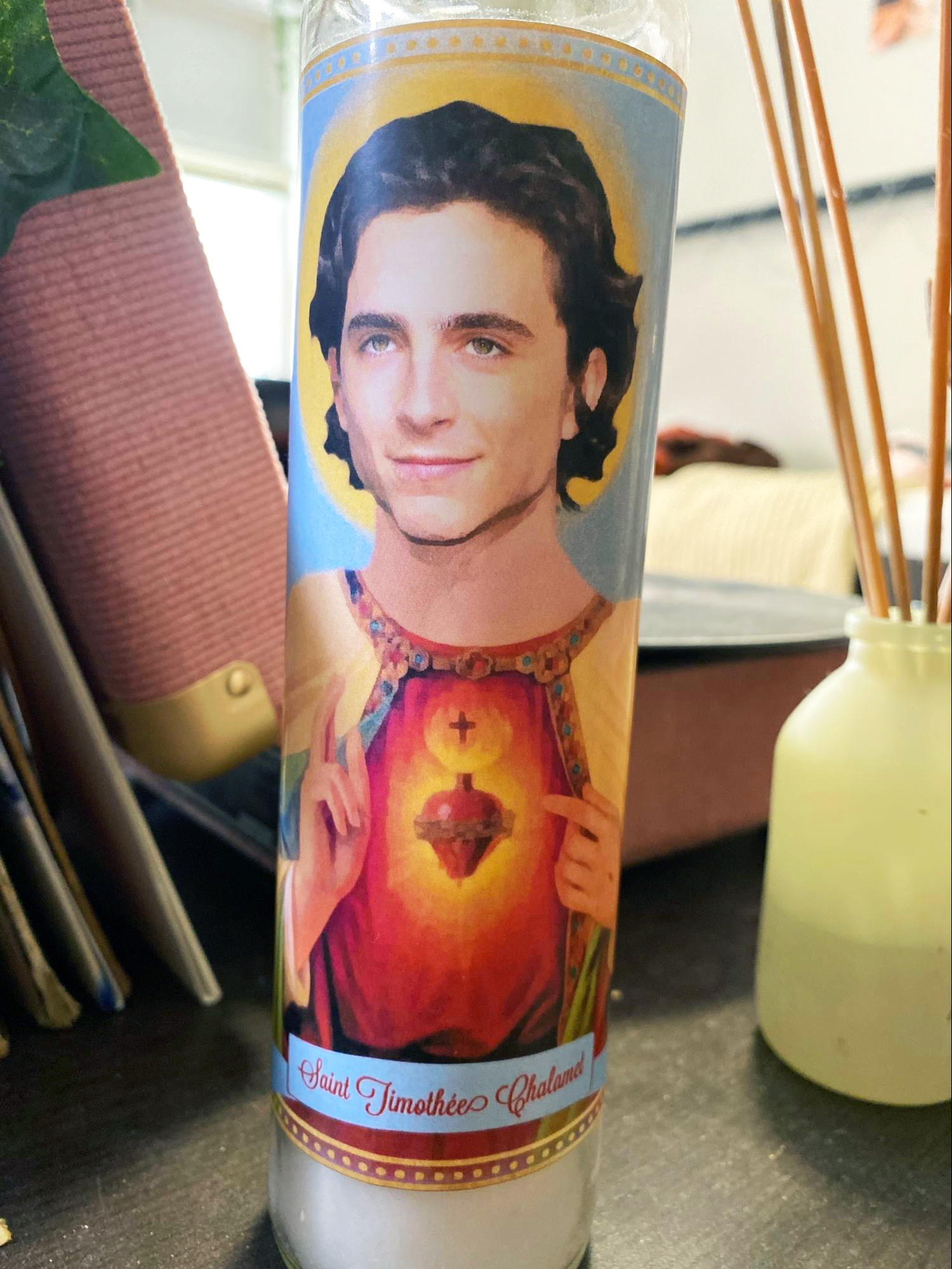 A Sacred Heart of Jesus Candle? Nope. In place of Jesus’ head is the chiseled face of actor Timothée Chalamet.

For Medill first-year Catherine Duncan, what started as an inside joke between her and a hometown friend about their mutual love of Chalamet turned into a personal going-away gift that now sits in her Allison dorm.

The candle serves as a funny yet meaningful reminder of their friendship. After all, what’s better than having Timothée Chalamet within arm’s reach? 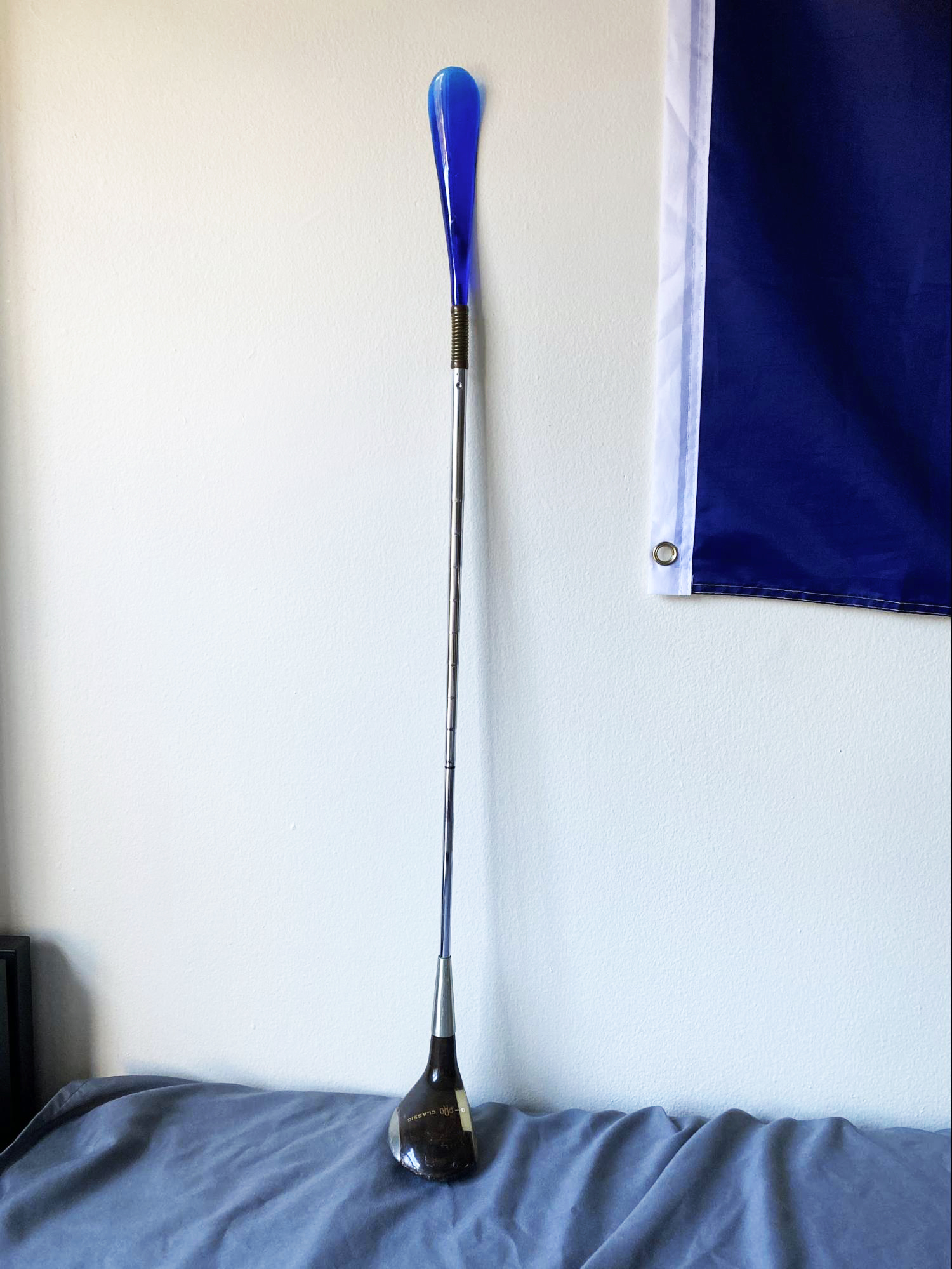 Shoehorn on one side, golf club on the other. For Weinberg first-year Savir Maskara, it’s the perfect practical dorm decoration.

Before leaving for college, Maskara and his friends organized a “Goodwill Secret Santa,” with each person buying a $5 gift from the store. Maskara received a shoehorn golf club.

While he admits the golf club head doesn’t serve a purpose in the dorm room, Maskara uses the shoehorn to put his boots on.

“I have a lot of boots and I’m not very used to putting them on,” he says. “It’s easier to just use a shoehorn than to yank it up my leg.”

Maskara conveniently hangs his shoehorn golf club on a hook close to his closet, so it often sparks inquiries from guests. 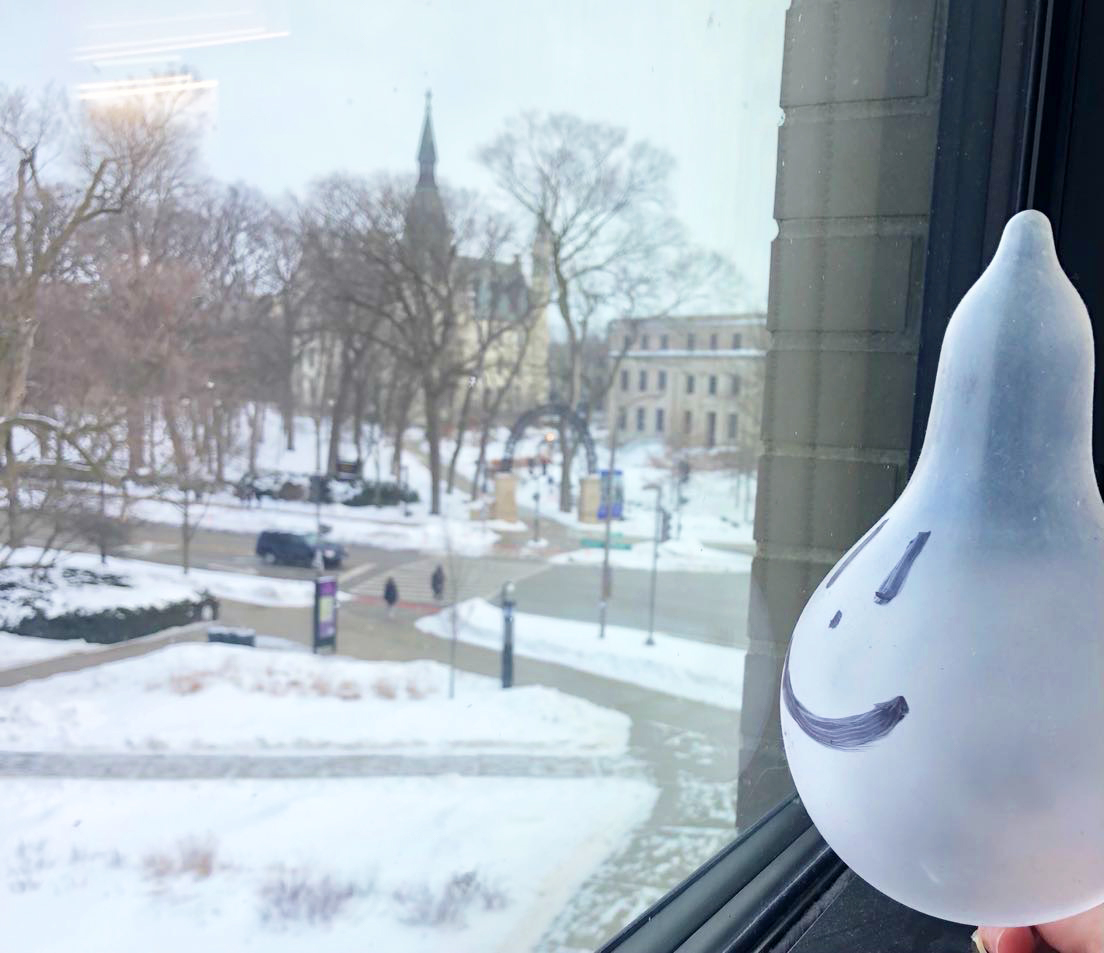 A product of a particularly stressful week of college combined with an unused box of condoms, Calvin sits on the window ledge of SESP first-year Emily Lester’s dorm room.
After her roommate, McCormick first-year Hannah Rabenhorst, found the condoms in her drawer, the two blew them into balloons, danced around with them and put a face on one, naming it Calvin.
Lester originally displayed Calvin in her room, but after realizing he was in her Zoom back- ground, she relocated him out of frame.
Always sporting a smile, Calvin has a clear view of the Weber Arch from his window abode, Lester says.