A palimpsest is a manuscript that has been written on, erased imperfectly and re-inscribed with some of the original writing still visible. But in Pope's work, the palimpsest isn't a manuscript — it's his body.

First, Pope is branded. Then, he is incised. Finally, he is tattooed with his sister's poem, a tribute to the reclamation of personal history. All three actions signify instances of historical violence endured by Black individuals. By the end, his pain is palpable, and the video's narration fades to a whisper.

“I remember that feeling of it being difficult to watch,” Dees says. “But then there was this moment where I realized the violence that they were referring to was so much greater than what was actually happening [on-screen]. I thought it was so poetic and powerful.”

“Palimpsest” is on display at The Block as part of the museum's newest exhibition, A Site of Struggle: American Art against Anti-Black Violence. Dees, a Steven and Lisa Munster Tananbaum Curator of Modern and Contemporary Art, curated the exhibition over the course of six years. Through approximately 65 pieces, it explores how American artists have engaged with anti-Black violence for over a century. Artwork is grouped by different strategies artists use to confront anti-Black violence, from realistic graphic representation to abstraction.

“As a curator, I felt like it was important to put together a project like this because of the historical significance of what it means to contextualize our contemporary struggles, but also a great belief in the power of art and the impact that it can have on our hearts and minds,” Dees says. 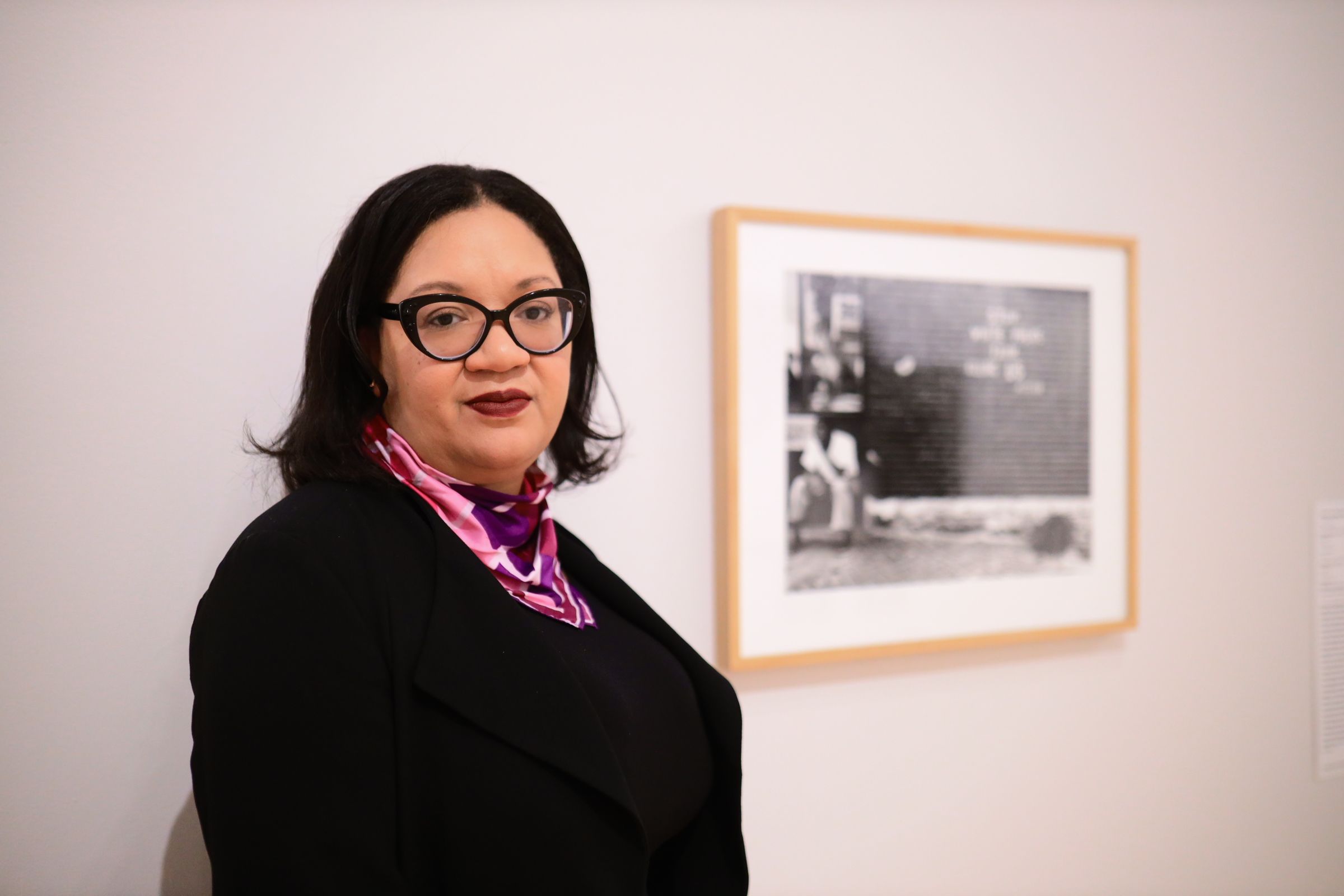 Block Museum Curator Janet Dees pictured at the exhibition A Site of Struggle.

A Site of Struggle is the most recent manifestation of The Block's January 2021 statement on diversity, equity, access and inclusion (DEAI). The museum committed to advancing DEAI through hiring practices, art collection, exhibition curation and programming.

The Block is uniquely positioned as an academic institution. With no obligation to make a profit or showcase prestigious works, the museum is fully dedicated to “meaningful content,” academic curator Corinne Granof says.

“We're not making blockbuster shows,” she says. “Our exhibitions stem from ideas and from history. We're interested in the idea of art sparking conversations about important topics, like A Site of Struggle.”

The museum's commitment influenced Dees' curation process: She focused on the exhibition's development and presentation, rather than just its content. Dees ensured A Site of Struggle represented Black community members' priorities by working with local organizations dedicated to racial equity and Black history, as well as Northwestern's Office of Neighborhood and Community Relations. This community advisory group influenced the development of “strategies of care” for guests. Benches throughout the exhibition, discussion questions in the visitor's guide and a reflection room were created to support visitors as they view sensitive content.

“We thought it was important to recognize that this is an ongoing struggle within our community [and] country, and that there are real people whose life experiences are connected to these histories,” Dees says.

Lois Biggs (Weinberg '20) started working at The Block in 2018 as a student with no museum experience. Now in a permanent position as The Block's Terra Foundation Curatorial Research Fellow and Curatorial Assistant, she watches the museum continue to evolve. An emphasis on “process over outcome,” she says, now informs curation.

“When you are telling the story — not just of a community but with a community, that really creates a space that you can come into and be nourished [and] transformed by,” Biggs says.

Biggs, who is White Earth Ojibwe and an enrolled member of the Cherokee Nation, is focused on bringing Indigenous voices to the museum. Raised in a family of visual and musical artists, she sees her Native heritage as inextricably linked to art. 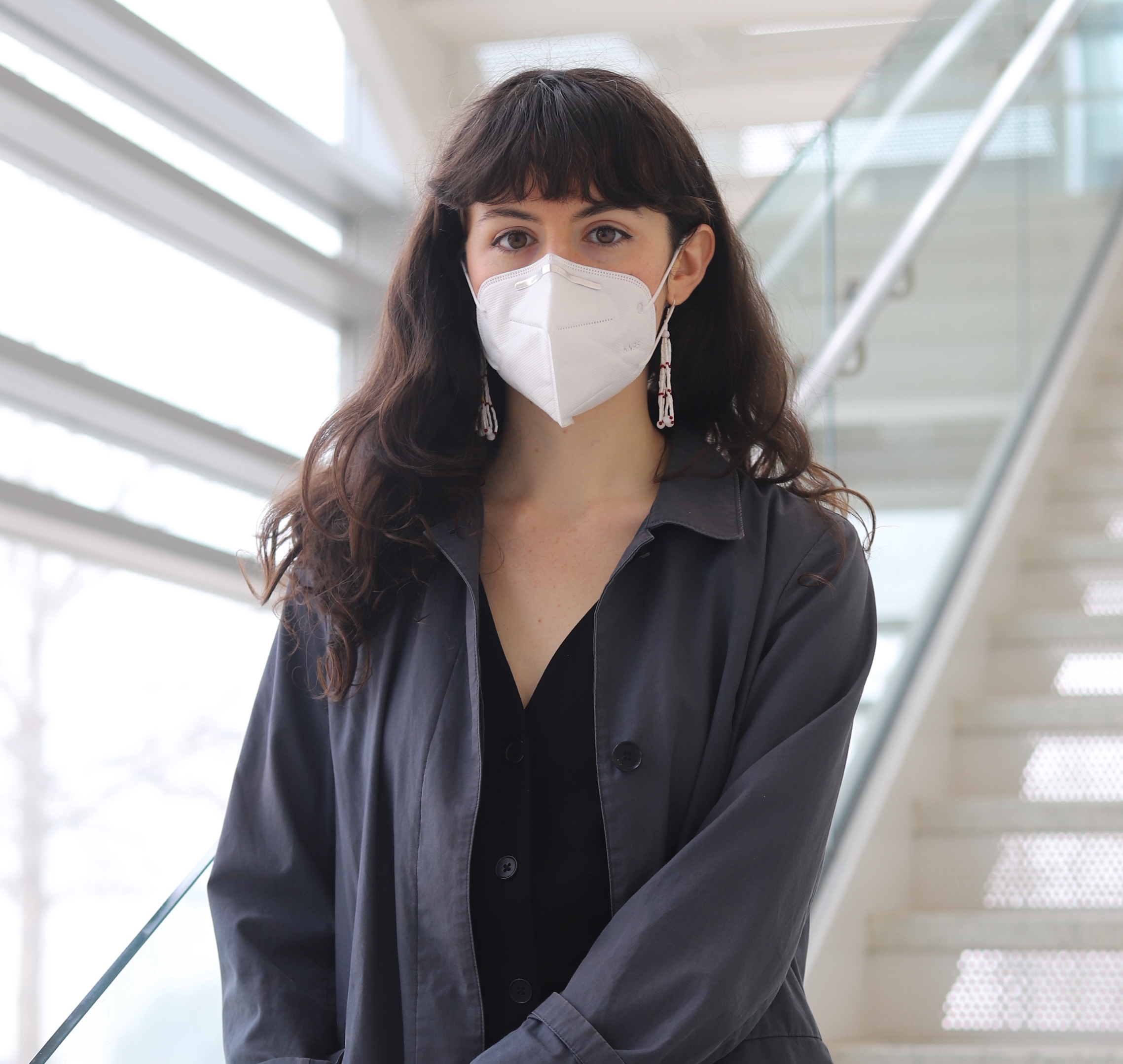 “Seeing how people close to me — friends and family — saw art as something so key to Indigenous presence spoke to me,” Biggs says. “Storytelling is a really key way of reflecting on the world and being in community for Native people.”

In winter 2020, The Block received a grant for a new exhibition from the Terra Foundation, a Chicago-based visual arts organization that also funded A Site of Struggle. The currently unnamed exhibition is set to open in January 2025 and will be a “community-led Indigenous art history of Chicago,” according to Biggs. It will focus on The Block's position atop land originally occupied by the Menominee, Miami and Ho-Chunk nations, as well as the Council of Three Fires: the Ojibwe, Potawatomi and Odawa.

Biggs is involving community members in the curatorial process, just as Dees did for “A Site of Struggle.” She is working with Indigenous groups on and off-campus to develop the exhibition.

“Through that process-based approach to the curatorial methodology, we'll be developing an exhibition that really speaks to this place and the communities that call this place home,” she says.

Other efforts at The Block are aimed at increasing diversity within its collection. When it was founded in 1980, The Block's collection primarily consisted of previous University art acquisitions and gifts from donors — the majority of which were created by European and American white male artists. Today, its permanent collection features 6,000 pieces. But due to its beginnings, the collection's slate of artists lacks diversity. Granof says the museum recognizes this and is working on increasing artist representation within its permanent acquisitions.

“It's not so much making sure that everybody everywhere is represented, but decentering the voices, so that it's not just this dominant narrative that [art historians] have learned,” she says. 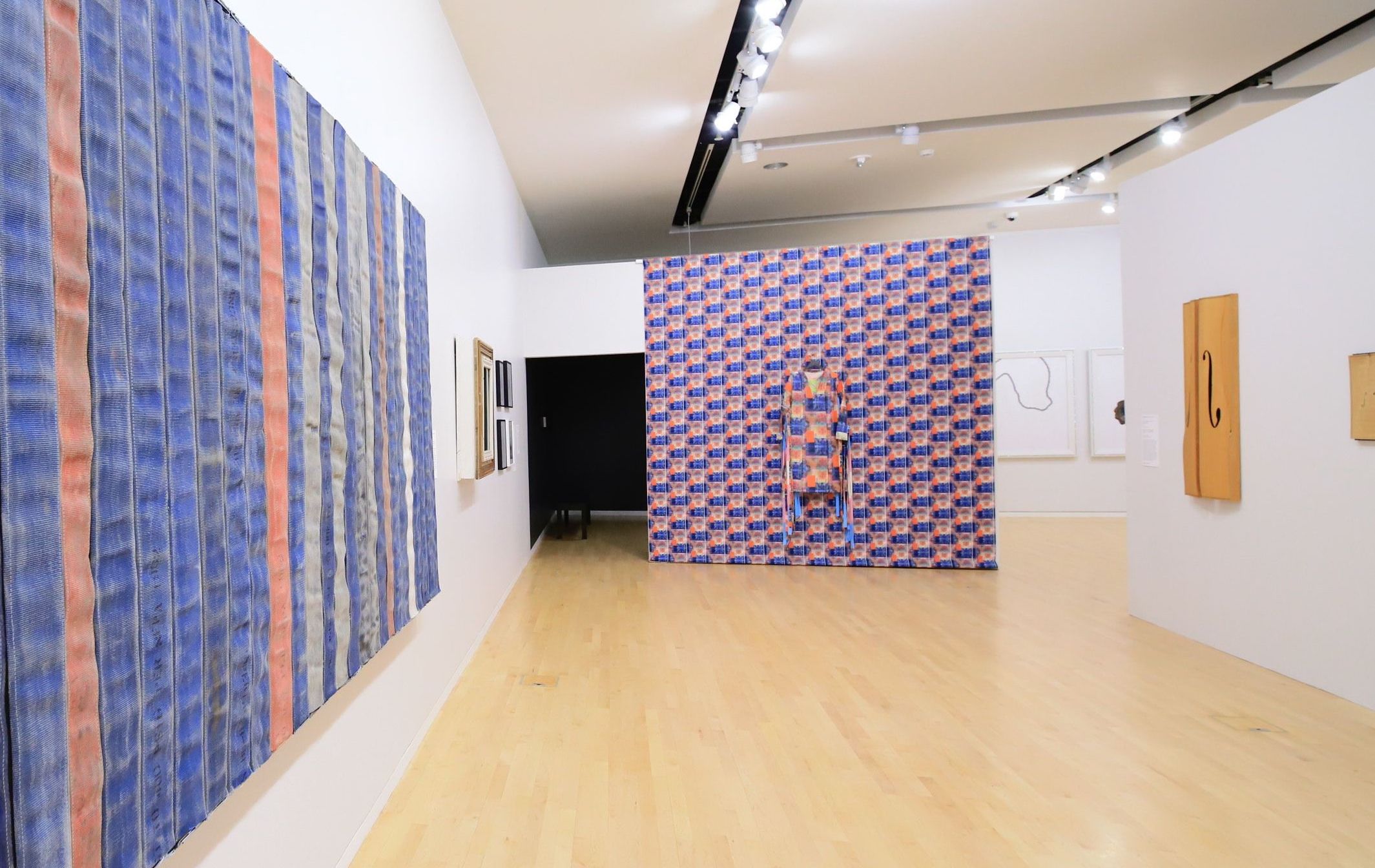 Inside the exhibition A Site of Struggle.

Granof says the museum's fall 2021 exhibition Who Says, Who Shows, What Counts: Thinking about History with The Block's Collection represents The Block's evolving mission. The project reexamined the representation of history in pieces from The Block's permanent collection, as opposed to temporarily loaned artwork.

“It's changing how we perceive the past, because museums are a large part of how people are connected with historical artifacts,” Giaconia says. “[It's] being aware of how you can change people's perspectives by walking somebody through an exhibition.”

Moving forward, the museum plans to continue emphasizing inclusivity in its curation and collection. This year, staff members began DEAI workshops and reflection sessions to further The Block's mission of empathetic storytelling.

“To me, exhibitions, art spaces, curatorial projects — just like artworks — are a form of storytelling,” Biggs says. “And I really believe that storytelling has immense power within communities in its capacity to heal, to challenge, to make people question, to think critically, to reach into themselves.”