Business in the Front, Student in the Back

Even during an unconventional quarter, students at Northwestern remain busy balancing courses and extracurriculars — and becoming entrepreneurs. Student-run businesses have always had a place in Evanston, but in the midst of a pandemic, some have turned their passions into profits. We spoke with five enterprising Wildcats to see how they’ve continued their work.

Less than a week into running Whipped Evanston, a custom cake and cupcake shop, Weinberg third-years Pranavi Ahuja and Sana Kharbanda had already learned a valuable lesson. The two friends had just set aside one of their first orders to frost when they noticed a cupcake missing.

“One of our friends came over, and he had no idea that these were for Whipped,” Ahuja says. “He thought it was just another trial round of cupcakes, and he just ate one.”

Scheduled to deliver in an hour, Ahuja and Kharbanda remade the entire batch from scratch.

“The lesson we learned from that was definitely to hide our cupcakes as soon as we make them,” Ahuja says.

Ahuja and Kharbanda started Whipped in early January after struggling to find a bakery in Evanston that sold the fully customizable cakes and variety of flavors they were seeking. Whipped currently offers vanilla or chocolate cake, five icing choices and an optional Nutella filling for cupcakes.

Since starting the home bakery, Ahuja says that business has moved faster than expected. She initially thought a few friends would support their efforts, but word about Whipped has traveled.

“Honestly, it just boomed, especially around Valentine’s Day,” Ahuja says. Whipped made over 200 cupcakes for the holiday; news had reached parents’ groups, and many people started ordering for their children.

Despite the increased time commitment, Ahuja has no second thoughts about starting Whipped. She believes her passion for baking grows with every batch.

Ahuja and Kharbanda aren’t looking to expand beyond their apartment anytime soon, but they are considering adding more desserts, such as tea cakes, cookies and brownies. Above all, they want to ensure each product is tested to perfection, no matter the menu size.

“We’re definitely trying out a bunch of different things in our kitchen right now, and we’re super excited to hopefully introduce them on the menu sometime pretty soon.” Ahuja says.

Cate Durudogan and Claire Koster didn’t set out to start a business. Friends Who Earring, which sells handmade polymer clay earrings, began as a hobby that the two SESP third-years bonded over. Koster started making earrings over winter break during her first year at Northwestern, inspired by a friend who made wire earrings. She and Durudogan shared a peer advising group but did not become close friends until she invited Durudogan to make earrings with her after the break. 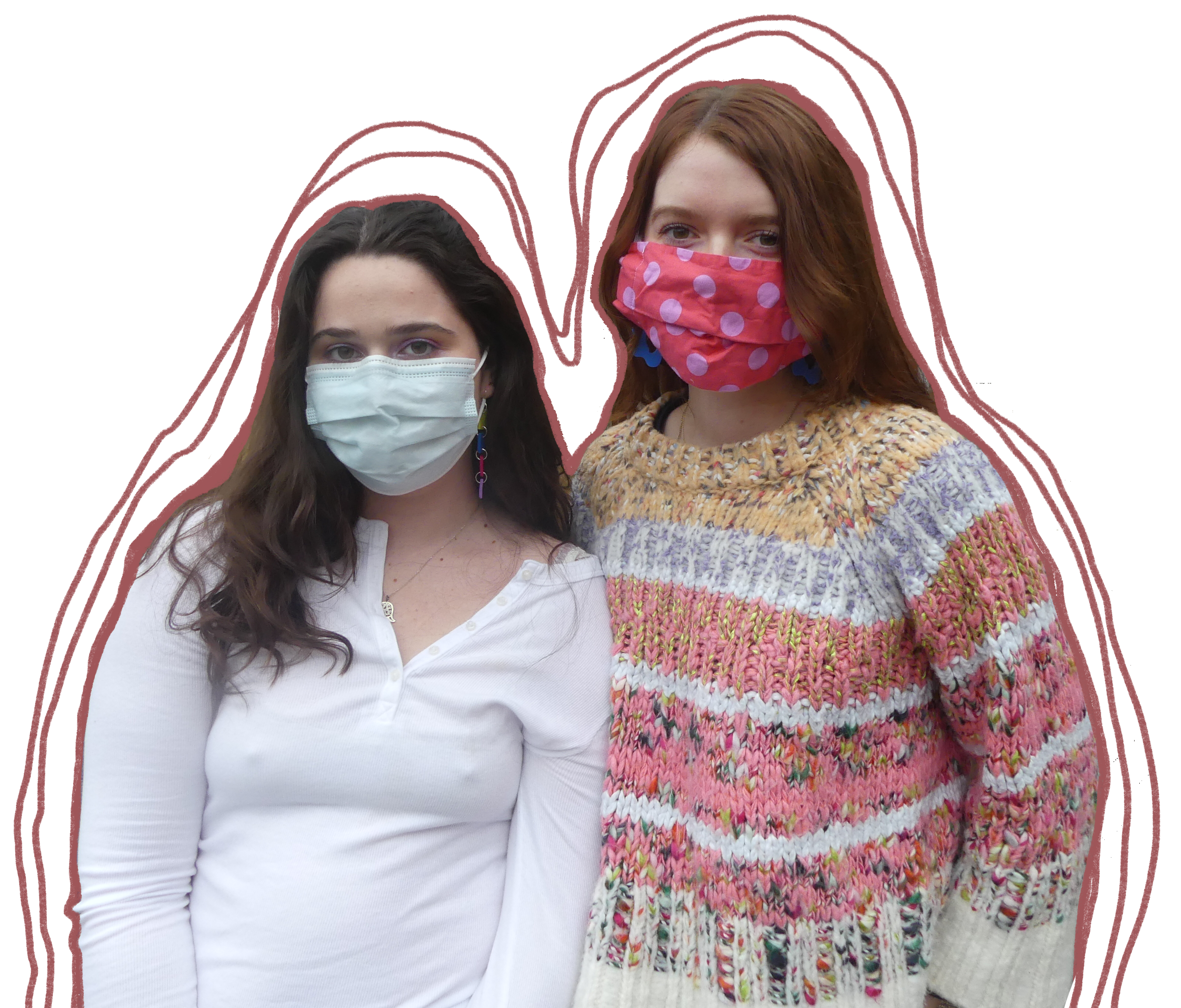 “When I first met her, I was like, ‘She has cool earrings, I want to be her friend. How can I wear her down and force her to befriend me?’” Koster recalls. “So, I was like, ‘Cate would like making earrings. This would work.’”

Soon, they were spending Friday nights making earrings in the common spaces of Koster’s first- year residential hall, South Mid- Quads. They eventually gave some away to friends, and others expressed interest in buying them.

Friends Who Earring now has more than 3,800 Instagram followers and over 2,400 sales on Etsy. But despite their growth, Durudogan and Koster run Friends Who Earring with a unique business model: They don’t profit from sales. Instead, all profits go directly to community organizations, mainly those in their hometowns of Chicago and St. Louis, such as Project Fierce Chicago and the STL Reentry Collective. The idea came after their first sale in June 2019.

“I was wearing all the earrings I had been making around my coworkers and friends, and when they found out I was making them, they were like, ‘Could you make me a rainbow flag pair?’ or ‘Can you make me a bi/trans/pan flag pair?’’’ Durudogan says. “I’m not going to profit off of rainbow capitalism.”

Durudogan and Koster donated that month’s profits to the Oakland-based National Queer and Trans Therapists of Color Network.

“We can make ends meet without pocketing the money, and we have other sources of income,” Koster says. “It was exciting to think about how a consistent base of money to make donations from could enable us to support what we wanted to.”

After the first donation, Koster suggested giving away their profits monthly. Now, Friends Who Earring chooses a new organization to give to every month, thoroughly researching each one.

“It’s really important to us that they’re run by people who live in the communities that they are working to support and serve,” Koster says. “If it’s an [organization] that’s for Black lives, in the vaguest terms, and it’s all white people on the staff and board, it’s like, ‘I don’t know if you’re the one that we’re going to give our money to.’”

The two friends emphasize that the real impact is made by the organizations they donate to.

“Part of the function that I hope the donations have is to create an impact while de-centering ourselves in that impact,” Koster says. “We can love social justice as much as we want, but we’re still two white women, and the things that white women do in spaces of social justice isn’t always additive.”

Ultimately, the pair hopes to continue Friends Who Earring without pressuring themselves to reach a certain goal or social media following.

“We just want it to keep being us,” Durudogan says. “I think we have seen this growth of other artists redistributing some of their wealth,” she adds, noting an increasing trend among earring makers. “I think that’s really beautiful growth to see.”

When Weinberg fourth-year Matt Schnadig was a first- year, he was shocked by the limited late-night food options in Evanston. Prior to starting college, he had seen his sister and his friends frequent many late-night food spots at other universities.

“If you go out or go to a party, or just after studying and you want to just decompress, late-night food was kind of that outlet,” Schnadig says. “There wasn’t really anything like that here.”

Schnadig envisioned a student-run food service that offered late-night breakfast food. In a collaboration with BrewBike, the team started selling overnight oats in 2018, eventually offering breakfast sandwiches and smoothies from an on-campus food cart in Spring Quarter of 2019. Despite initial success, they ran into issues last fall.

“We didn’t want to stand outside in the cold selling food, and also our food ended up getting cold,” Schandig says. “Then COVID hit, which was, in a weird way, a good thing for us because it gave us some time to reevaluate.”

The Table now operates as a late-night food service, delivering chicken nuggets, chicken sandwiches, fries and milkshakes made by Northwestern student cooks to students in Evanston. Running as a “ghost kitchen,” orders are received and prepared from a kitchen at Ebenezer AME Church before being delivered.

“Operationally, it’s a lot more simplistic than what we had been doing, and it’s also reverting back to our original plan — our original hope of adding more late-night food options on campus,” Schnadig says.

Since relaunching, Schnadig says The Table has received mostly positive customer responses and aims to tailor its menu to student feedback. Due to high demand, The Table recently added ranch sauce and milkshakes.

“Once we did, everyone was getting milkshakes, which was really exciting,” Schnadig says. “It showed that our customers’ opinions really do matter.”

More than homemade recipes, fresh ingredients and food quality, Schandig says The Table prides itself on being a student-led venture and hopes it can be passed down as a club would.

“It’s this outlet for students to get some real-life work experience,” Schnadig says. “Students who like to cook; students who just want to make money; [it] really gives them that opportunity to grow and succeed.”

For Schnadig, The Table has enabled him to pursue a unique project alongside friends and to learn about business operations outside of coursework.

“I would say this has been the most beneficial experience for me in terms of learning, more than any class I’ve taken at Northwestern,” Schnadig says. “A class can teach you how to do finances or market research — all of which are important, but in terms of actual operations, which, personally, I think is the most important, that’s really just getting in there and going for it and making mistakes and learning from those mistakes.”