“You know, a lot of times people take themselves so seriously, and fill themselves with this puffery to try to convince people that you’re a success,” said Eddie Lakin, founder of Edzo’s Burger Shop. “I feel like the best way to have success is to be having fun every day. Be really good at what you do, and take your job really seriously, but still have fun every day.”

Today, these twin ethos of being dedicated to having fun while also finding dedication itself fun is what animates Edzo’s, Eddie’s restaurant in downtown Evanston on 1571 Sherman Ave.

Growing up in the Chicago area, Eddie’s parents exposed his taste buds to a variety of flavors. His dad took him out for hotdogs and fresh-cut fries at the old-school spots on North Shore. His mom was an “adventurous cook” who baked 30 kinds of cookies for Christmas and invited over neighborhood friends to make dim sum recipes from Chinese cooking classes. With two foodie parents, Eddie began to experiment himself, from making breakfast on the weekends to swirling ingredients together in PB&B&MS sandwiches: peanut butter, bacon, and maple syrup.

At age 25, Eddie decided to enroll in culinary school. For two years, he attended night classes while also working as a telemarketer during most of his schooling. Afterwards, he explored the world of fine dining. Peter Meehan, who Eater described as “one of the most consequential food journalists of the last decade,” recounted Eddie’s career in a New York Times article as one of a sophisticated vagabond chef:

“Before he was an aspiring burger baron, he was a culinary-school graduate who cooked at some big-time spots in Chicago — TRU back before Rick Tramanto was born again, Nacional 27 after that — and rambled around Europe, cooking in Barcelona, Spain, and Bologna, Italy,” Meehan wrote.

But then the finance sector collapsed in 2008, and among the recession’s debris was Eddie’s job at a restaurant in downtown Chicago. For the following six or so months, he searched fruitlessly for another position. 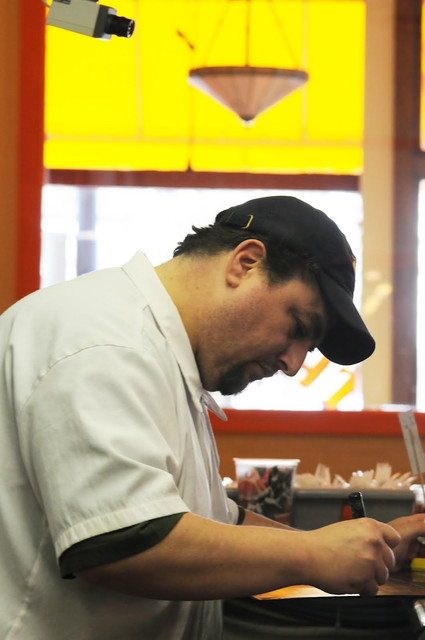 Eddie on the clock at Edzo's. Photo courtesy of Eddie Lakin.

“I kept seeing people I knew that were interviewing for the same positions that were way better chefs than me," he said. "And all the jobs we were trying to get were crappy jobs that we wouldn’t have even taken a year before.”

There were too many candidates, not enough jobs and a lot of empty storefronts out for rent. The way Eddie tells the story, the solution seemed straightforward. “I was like, ‘You know, if I can just scrape together a little money, I can probably start my own place.’ So I decided to create a job for myself instead of trying to find one.”

As for deciding what kind of food that job would entail, he followed his stomach. The fare Eddie craved was simple — all he wanted was a really good burger and fries. Even though hamburgers are the ultimate American dish, Eddie couldn’t find the kind of burger and fries he wanted to eat.

Too many of the places he visited used frozen patties and fries, and for the most part, burgers were an obligatory afterthought relegated to some dusty corner of the menu. Eddie wanted to establish a restaurant that was absolutely burger-centric, where fries and hotdogs would be the savory cherries on top.

When opening Edzo’s Burger Shop, Eddie created a treasure-trove of a Blogspot page called Chicagomatic. On it he shared stories of his adventure in starting a restaurant. He published details of his extensive culinary research from both in the kitchen and on the field.
Eddie experimented with what temperature to cool the fries, how long to rinse the potatoes, how hot to set the oil. He sampled burgers at Muskie’s in Chicago (“your standard-issue frozen hockey puck”) and Culver’s in Wisconsin (“the staff is always ridiculously, genuinely NICE. I'd sit and wonder about the hows and the whys of their corporate training if I didn't know that it's just a Wisconsin thing”).

Eddie’s tales of his culinary exploits ripple with cheerfulness, a quality that appears even in his stories of boring tasks. In relating the dull and taxing chores he had to check off his list, his bemusement persists like an undercurrent, even if mixed with a dose of exasperation. After cashing out over $500 on a mandatory sink used solely for cleaning ice cream scoopers, Eddie wrote a post in the first-person voice of his ice cream dipper well: “Behold me in all my stainless steel glory!” In summary of an entire day spent bolting a stainless steel prep table to the wall, he wrote, “Yep, another successful day in the glamorous restaurant biz!” 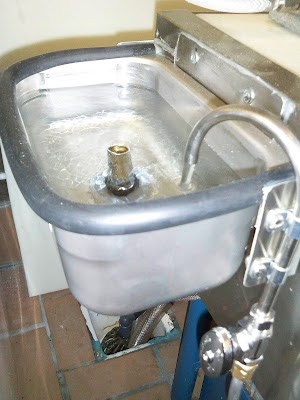 On October 15, 2009, after about six months of preparation, Eddie finally opened Edzo’s Burger Shop. The nostalgia-infused joint received media attention and streams of customers from the very beginning. Even though he was entering a difficult industry, Eddie knew success would come.

“My mindset was that I know how to make food better than almost everybody. If I can make my food taste better than everyone else’s food, and charge about the same or maybe a little more, then I’ll be successful," Eddie said. "Honestly, that was it.”

Twelve years later, Edzo’s Burger Shop is a mainstay in Evanston, beloved by Northwestern students and local residents. In a Chicagomatic post from 2009 titled, “am I still a chef?” he acknowledged that his status as a chef seemed to decline when he stopped finishing mise en place at 2 a.m. and started flipping burgers.

But although Eddie holds the credentials to insist on proper recognition as a chef, he harbors no hunger for a title. He would much rather be busy having fun, chasing the devoted yet playful spark of his classroom that he fell in love with so many years ago. Because what could be a more roguish expression of anti-puffery than the humble burger?

“I kind of like the fact that the restaurant that I chose to open is so low-brow and accessible that people are reluctant to bestow the title of ‘chef’ on the guy running the show," he said. "Joints don't have chefs, I guess. That's probably a good thing.”