A course in comedy

The lights go up on a small stage, revealing three student performers in front of Mee-Ow Comedy’s signature logo of a cat wearing glasses. The scene opens with a kid trying on shoes at a Foot Locker store. His mother insists he run up and down the aisles to make sure they fit.

The crowd bursts into laughter as Mom, Son and Foot Locker Employee role-play increasingly ludicrous scenes — a failed school dance, drug bust and court case — all tying back to the essential question: Do the shoes fit?

Northwestern has a thriving comedy scene and is home to a range of student improv, sketch comedy and satire groups. Several famous comedians like Stephen Colbert, Julia Louis-Dreyfus and Ziwe Fumudoh all call the University their alma mater.

The shoe sketch, written by Communication fourth-year Liv Drury, came at the tail end of Mee-Ow’s show last winter. Mee-Ow, a student-led sketch, improv and music group, is one of eight comedy groups on campus.

Drury first entered the campus comedy community in her freshman year through The Titanic Players, another improv group. She later joined Mee-Ow in her third year. Her experience learning from the upperclassmen in these groups shaped the comedian she is today.

“The bulk of my education [at Northwestern] is what I’ve learned from my peers,” Drury says. “The older people of Mee-Ow taught me everything I know about sketch writing and how to write a good sketch, how to be a good voice in a writer’s room.”

During Mee-Ow writing sessions, students spend four hours a day, five days a week, writing and rewriting skits. Each Winter Quarter, they workshop over a hundred sketches before narrowing them down to a dozen. They perform two shows, one midway through Winter Quarter and one at the end.

Writers are expected to bring in two new sketch ideas a day. Drury says the quick turnarounds and constant peer feedback have improved her writing.

“It can be a bit of a confidence hit if you have a bad show or delivered a sketch to an absolutely silent writers’ room,” she says. “The hardest part is to not take that personally and not let it get under your skin.”

As she prepares to become a screenwriter and director, Drury says learning to write spontaneously, quickly and without self-criticism helps her think outside the box.

Communication fourth-year Nena Martins came to Northwestern with no previous comedy experience. To overcome her fear of auditioning, Martins, a theatre major, decided to try out for a handful of student performance groups. Even after she made it into Titanic, her anxiety didn’t subside.

“There is nothing that’s so vulnerable to me like going on stage without knowing what you’re gonna say and trying to make people laugh,” Martins says.

Each year, Titanic admits a new group of mostly first and second-year students. These students work together as a team for the rest of their time in Titanic.

During their first two years, new Titanic members are mentored by upperclassmen members. After that, Mike Abdelsayed, alumni director for Titanic, takes over the coaching role.

Coaches teach new members improv techniques such as pattern work — the predominant joke and scene structures used when improvising. They practice varying characters and building scenes from audience suggestions so that the students feel more sure of their skills when it’s time to perform. After practicing and performing alongside the same team for four years, Martins says she now feels confident on stage.

“It’s really about trusting each other,” Martins says. “Whenever you go on stage, whatever you say, everyone on your team is going to be backing you up.” 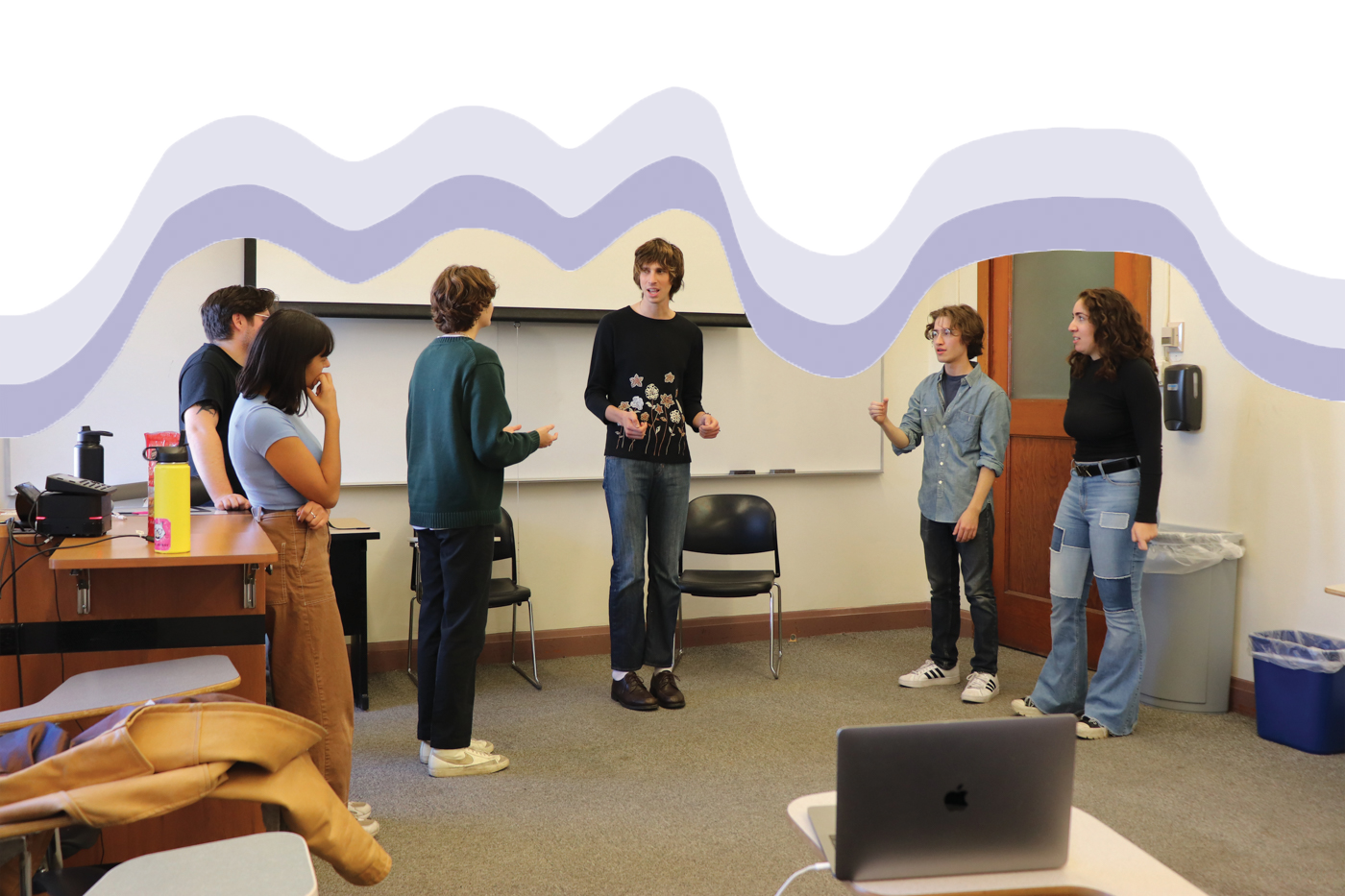 “It’s a bonding process that creates communities of people who are interested in the same sort of thing,” Cogswell says.

He also describes how sharing collective identities with others makes us more open to being made fun of. Like a friendship where each person mocks the other lovingly, Northwestern students are more willing to take jokes from a fellow Wildcat. People laugh about each other, with each other.

Communication second-year Diego Goldfrank agrees that laughing with each other creates a strong comedy community. Goldfrank, a member of several campus comedy groups like Northwestern Sketch Television, says that in his experiences doing improv or stand-up, the crowd is usually filled with members of other comedy groups.

Communication second-year Diego Goldfrank agrees that laughing with each other creates a strong comedy community. Goldfrank, a member of several campus comedy groups like Northwestern Sketch Television, says that in his experiences doing improv or stand-up, the crowd is usually filled with members of other comedy groups.

Goldfrank first tried stand-up comedy at a Glassbox show, a stand-up performance event hosted by satire publication Sherman Ave. Surrounded by talented peers, Goldfrank says he felt he had a lot to live up to, and he appreciated upperclassmen in Sherman Ave workshopping his material.

Part of learning within the comedy community is being humble, Goldfrank says. He’s learned not to take criticism of his material too seriously. While auditioning or performing alongside his Northwestern peers, Goldfrank says he’s “just happy to be there.”

Peer support is integral for the training processes within campus comedy groups. In their time at Northwestern, seniors like Drury go from learning from upperclassmen to becoming the coaches themselves.

This year, Drury is coaching Titanic’s newest cohort of comedians. She finds enjoyment in passing on the improv techniques taught to her by former upperclassmen.

“I’m glowing with pride at their shows,” Drury says. “Watching them grow has been one of my greatest joys at Northwestern.”