In the second-floor rehearsal room of the Wirtz Center, a group of students rehearse for WAVE Productions’ Macbeth. The director approaches the actor playing Ross and asks him to recite his monologue. The actor only makes it through the first phrase before stuttering and asking for his line. The director is infuriated, and before the actor can explain himself, she slaps him across the face.

The actor stumbles back. Then, lurching forward, he lands a right hook on the director’s face. She follows by delivering a punch to the actor’s gut, the force of which takes him off his feet and lands him flat on his back. After pouncing on the actor and choking him to death, the director rises and exclaims to the spectators, “We’re gonna have to find a new Ross!”

The room erupts in applause. This “fight” was the culmination of the day’s workshop, aiming to prepare for Macbeth’s fight choreography. Earlier, the fight choreographer taught actors how to fall backwards convincingly and safely by demonstrating the following steps: toe down, knee down, butt back and finally, head down. The actors practiced this process in groups of three. Starting off clumsily, their falls became increasingly fluid as they overcame their initial reservations.

Afterward, the actors paired up to work through a fight from initiation to resolution. Face-to-face, one participant would confront the other over an imagined slight. They would trade blocks and blows before one fell to the floor. 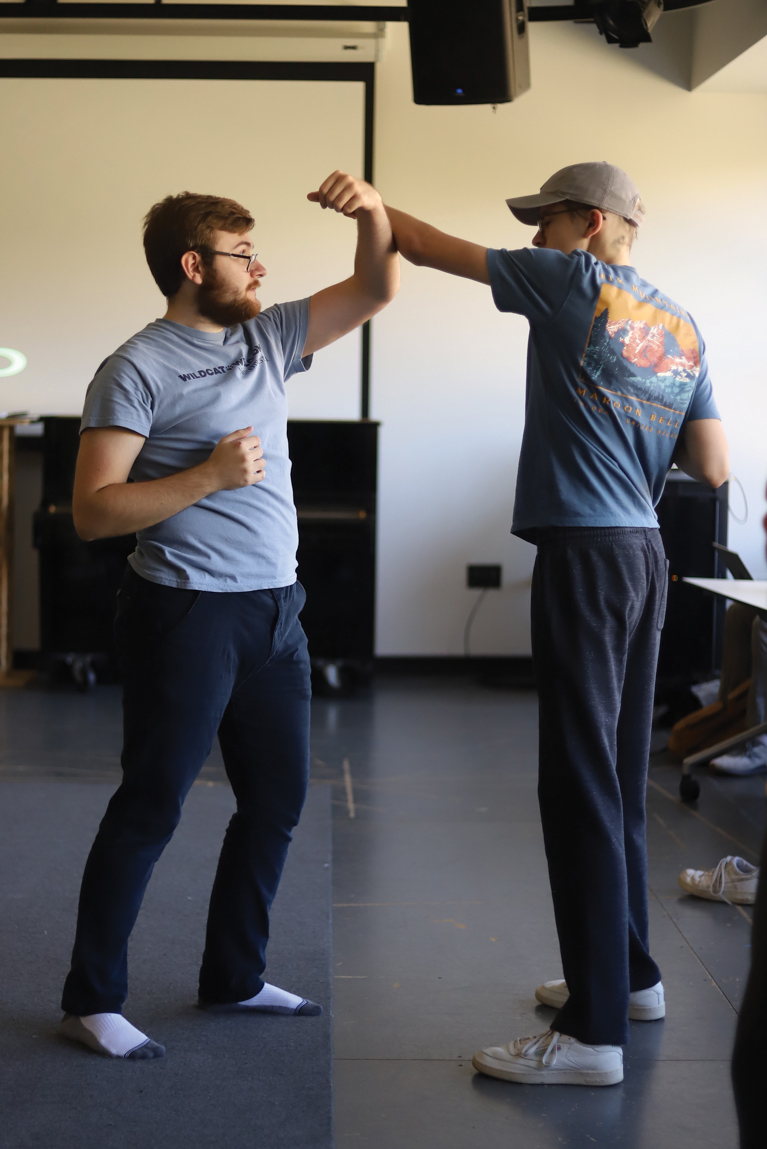 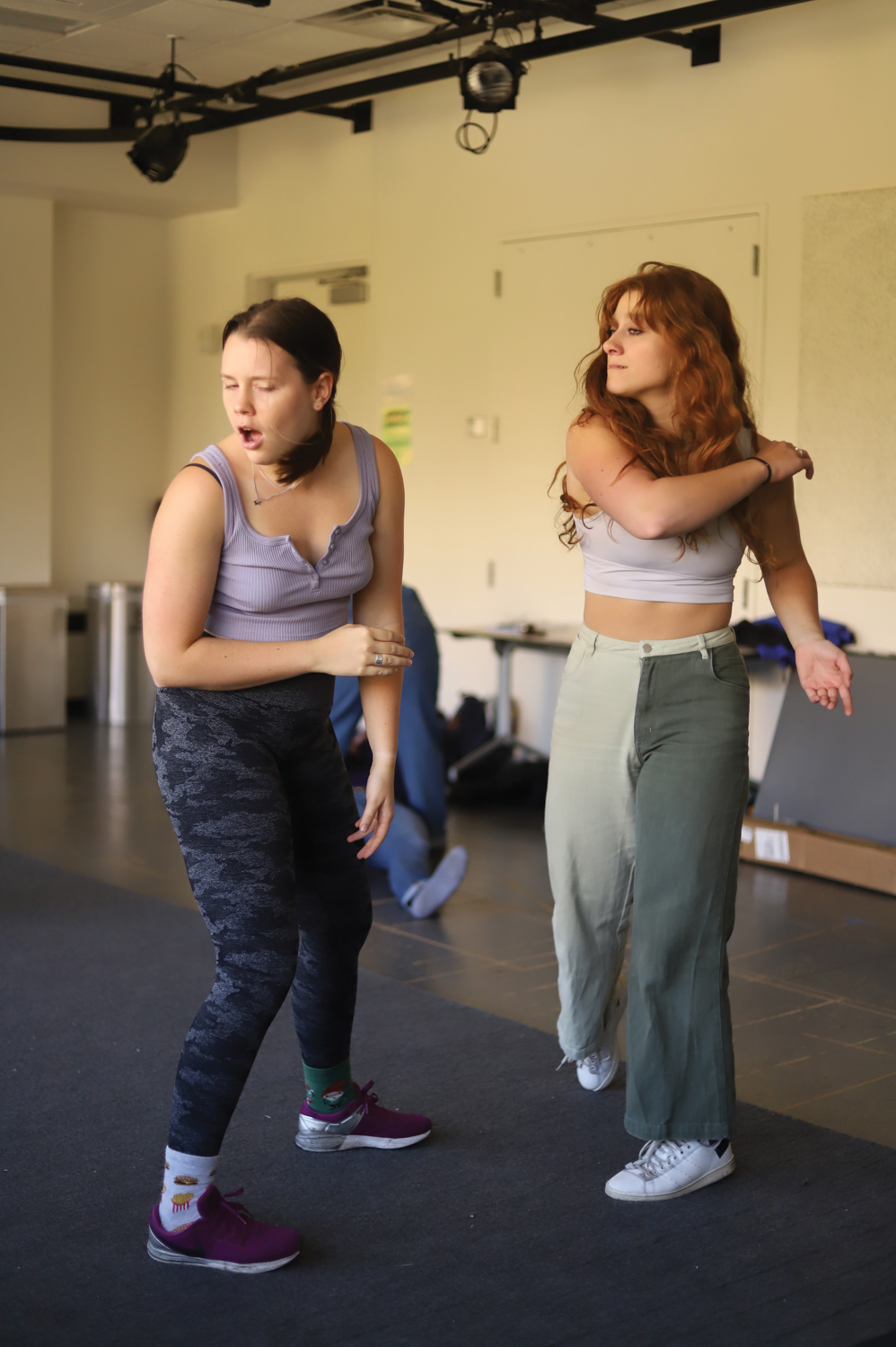 While punches and takedowns may not be what first comes to mind when picturing rehearsal for a play, fight choreography is a complex art integral to many theatrical productions. It presents a study in contrasts, lying at the intersection of safety and danger. Just as scenes of violence can be a matter of life and death for performers, they can also give life to a production’s full dramatic potential. At Northwestern, a small but passionate group of student fight choreographers inject the vibrant theater scene with calculated conflict.

Communication second-year Gavin Shaub had a rude introduction to fight choreography. During a play in ninth grade, his friend’s character was supposed to slap him in the face with his glove.

“My friend accidentally hit me in the nose with the entire force of his fist,” Shaub says. “I had to keep going with the scene because it was a dress rehearsal.”

Despite this experience, Shaub made it his mission to infiltrate the fight choreography crowd when he arrived at Northwestern. Alongside Communication second-year Grace Wagner, he reached out to upperclassmen who had done fight choreography in the past and asked how to get involved.

Those conversations opened the door for Shaub and Wagner to serve as assistant fight choreographers on productions of The Lightning Thief and She Kills Monsters. With only one or two new recruits per year, Northwestern’s community of fight choreographers is small but welcoming.

“It was very easy to just immediately get involved, and now as a sophomore, I’m waiting for some ambitious freshmen to come up to me and be like, ‘How can I get involved in fight choreography?’” Shaub says.

Wagner, who is now the fight choreography instructor for WAVE Productions’ Macbeth, was also injured early in her theatrical career. In eighth grade, her scene partner forgot the choreography and improvised, leading Wagner to nearly concuss herself on the stage. 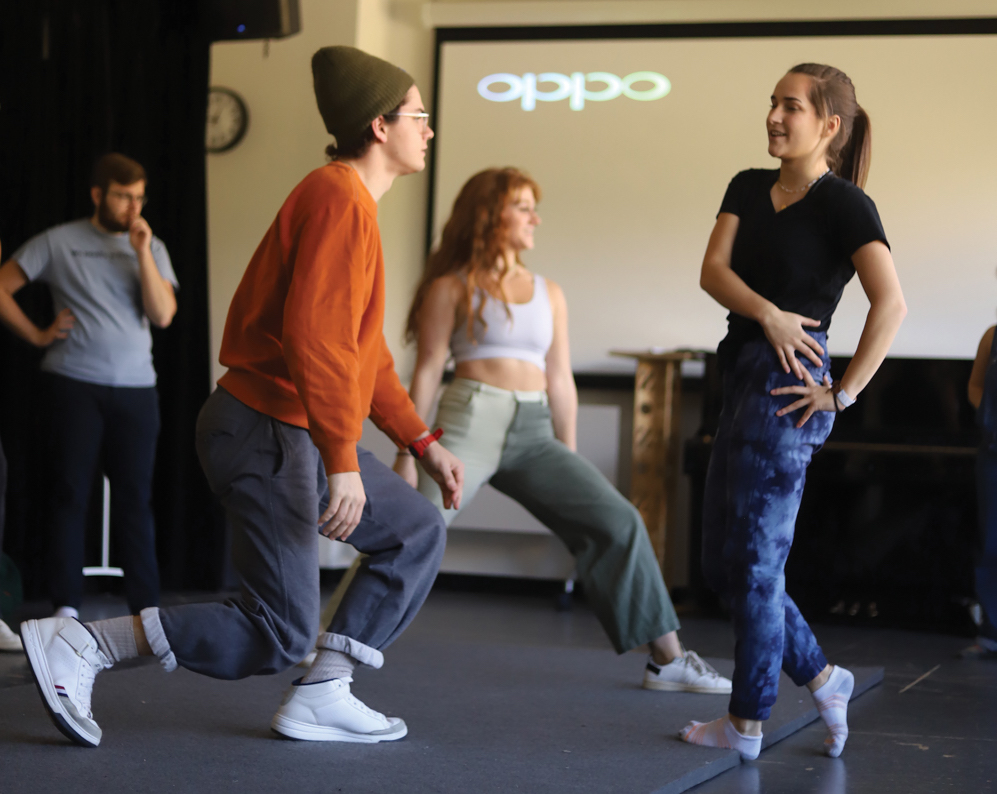 “When I was growing up, I would look up to Katniss Everdeen and all of these strong women when that’s not really the norm,” Wagner says.

She finds that helping others play those characters through choreography is very rewarding.

Julie Monteleone, Communication second-year and director of Macbeth, had exposure to fight choreography before attending Northwestern. She grew up working with a Shakespeare company in her hometown of Lenox, Massachusetts, where she gained ample experience in stage combat.

As with Shaub and Wagner, Monteleone was hurt while performing. She suffered her worst injury in 10th grade, when she tore her ACL and meniscus in the opening performance of a production of Henry V. Often, Monteleone says the instruction she received wasn’t comprehensive, and her peers weren’t rehearsing safely.

“I wanted to start doing fight direction myself because it means a lot to me to make fights look safe and be safe for the actors,” Monteleone says.

The goal of fight choreography is making simulated violence convincing while preserving the safety of the performers. To Shaub, this all comes down to training. One exercise that he finds instrumental involves gradually shoving a scene partner harder to determine their limit.

“A lot of people just push very lightly because they’re scared of hurting the other person, even though the other person is affirming them,” Shaub says. “It can be hard to get past that first barrier, but it’s about getting people comfortable with each other and with feigned violence.” 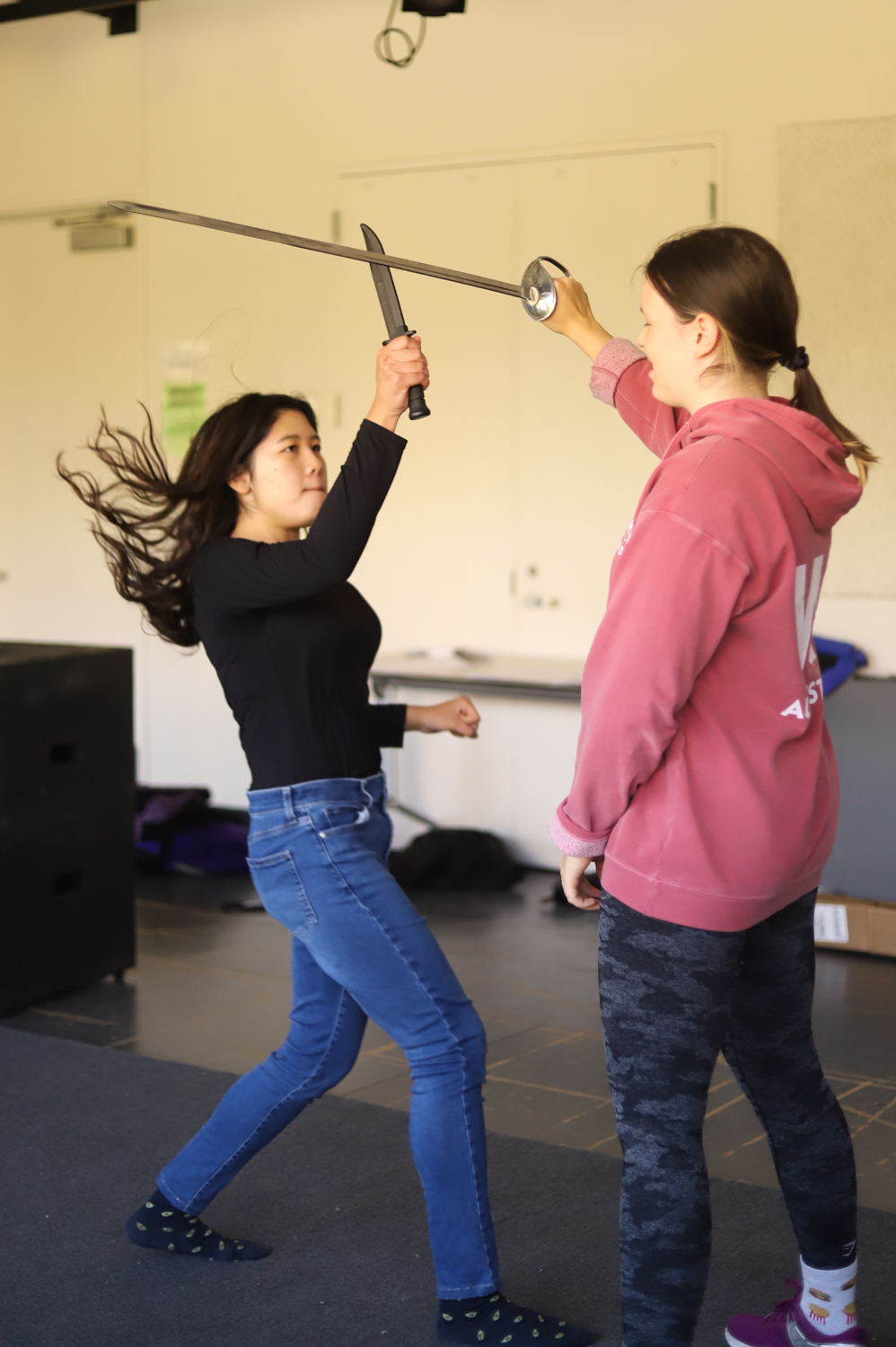 Sirin Jitklongsub and Margaret Pirozzolo learn fight choreography with swords in the workshop.

When each participant feels comfortable, the shoves look real.

Wagner communicates the fight to the audience via a “bigger is better” approach.

“The bigger movements are, the bigger it will read to the audience and the better it will congeal into one picture,” Wagner says.

There are exceptions to this rule, however. Wagner says that different types of plays require different presentations of violence. While a production involving superheroes may call for exaggerated movements during a fight, subtle maneuvers may be more compelling in a more serious production like Macbeth.

For Monteleone, fight choreography is only as good as the preparation that goes into it, and preparing actors for a staged fight can be a long, exacting process.

“A lot of the process of building [the choreography] is going slowly and adding move by move what makes sense for this story — who’s winning, who’s losing — and then really locking in whatever you do,” Monteleone says.

This approach is integral to Monteleone’s production of Macbeth. While a less violent play may demand only a single visit from a fight choreographer, Monteleone brings Wagner in about once a week to ensure the cast’s readiness.

Communication fourth-year Gray Watson, the actor who was “strangled to death” in the workshop, affirms that Monteleone’s efforts are working.

“The guidelines we have in place makes it feel like a very safe space,” Watson says. “I’m never scared of the show or anything else.”

“The guidelines we have in place makes it feel like a very safe space. I’m never scared of the show or anything else.” 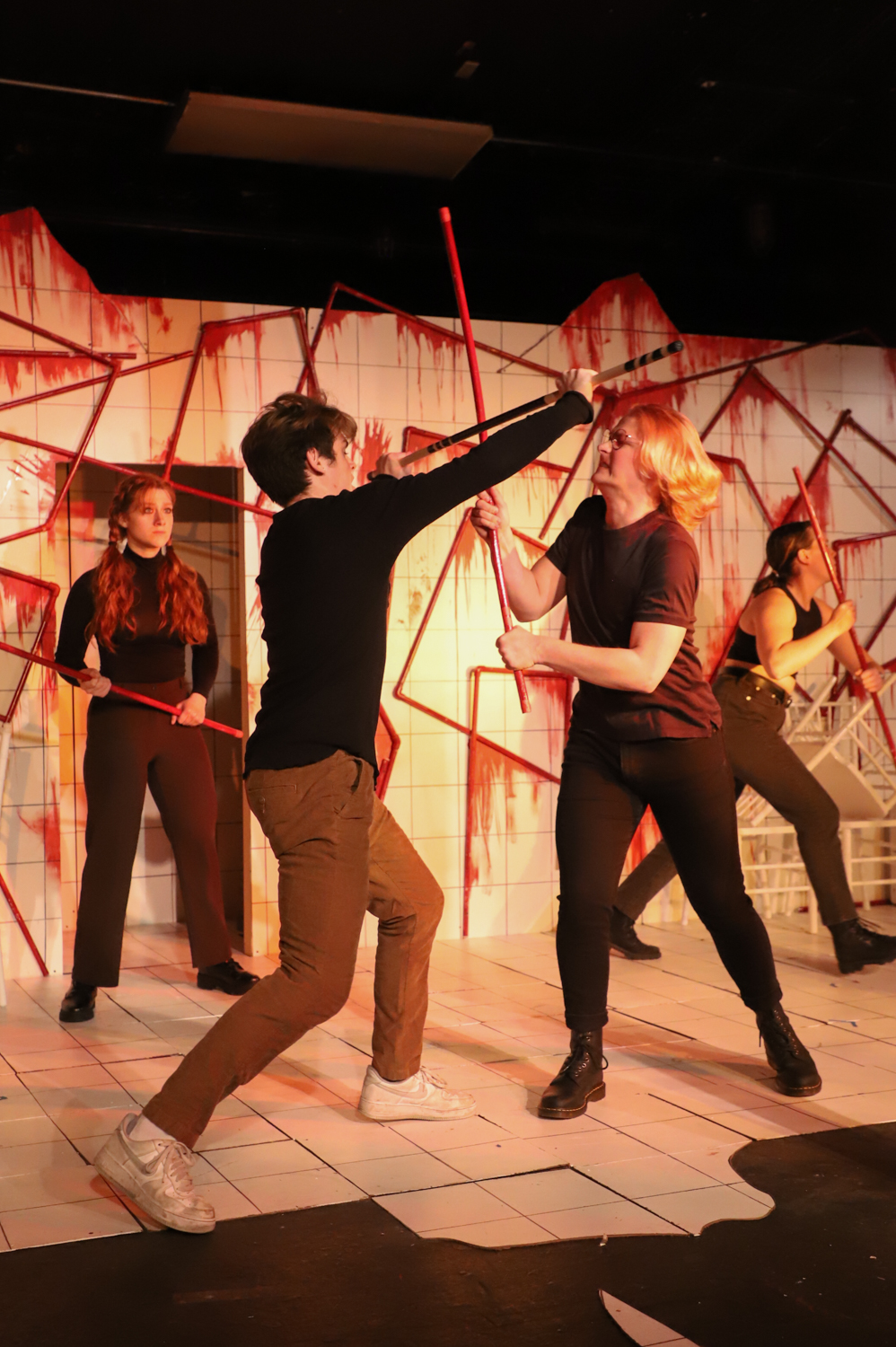 Elliot Hansen and Watson spar during a fight scene rehearsal.

“How do you tell a physical story with your body and your voice? You could do the weakest sword slash, but if you make a scream that sounds realistic, then people will believe it — sometimes more than the visuals,” she says.

Throughout the Macbeth workshop, there was constant communication between sparring partners, and everyone had a smile on their face. Every minute or so, a burst of laughter escaped an actor.

“We have fun doing it, you know? It’s not all serious,” Wagner says. “I mean, we all love swinging swords around.”