Daniel Yeboah works at Sargent Dining Hall from Tuesday through Saturday. However, on Sundays and Mondays, he transforms into a seasoned reggae rockstar. 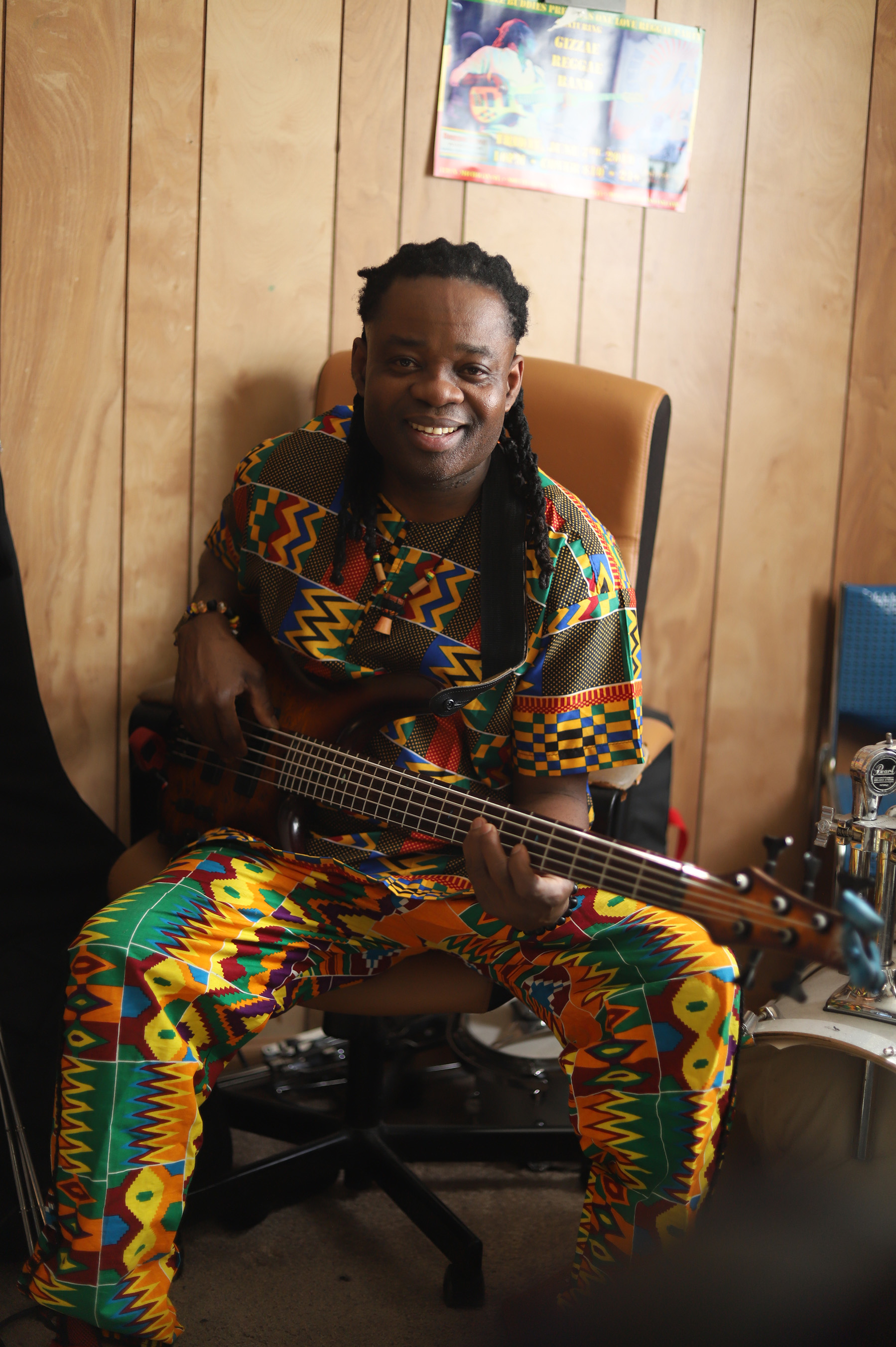 Daniel Yeboah in his home studio. (Photo by Eloise Apple)

Yeboah has lived in Chicago since 1997, when he arrived in America as a drummer on tour with reggae band Super High Kings. After the tour, he decided to stay in America and has worked in Sargent Dining Hall at Northwestern for 22 years, simultaneously producing and performing reggae music.

Throughout the week, Yeboah balances music, work and fatherhood. On work days, he wakes up at 4 a.m. to start his shift, ensuring that the beverage machines are functioning, food is stocked and desserts are cut. He also arranges picking up his children from school with his wife Sara. When the chance to perform a gig presents itself, Yeboah weighs whether or not he should take time off of work.

"It's no joke — I am there on time, I don't run late, I don't call off. I take my job seriously and do what I gotta do,” Yeboah says. "If someone needs me to perform, it's a choice. I need to make a decision. If I'm working that day, I can use my sick hours or give up vacation days depending on how much I make out of the gig."

As a child, Yeboah would walk around his hometown in Koforidua, Ghana, mesmerized by the sounds of his environment. The chirps of birds and the clamor of pedestrians formed the background melody of his neighborhood. In church, he taught himself to play the drums and was eventually hired to play every Sunday. This start in the music industry propelled Yeboah into the Ghanaian reggae scene. For several years, he performed in different bands across the country. 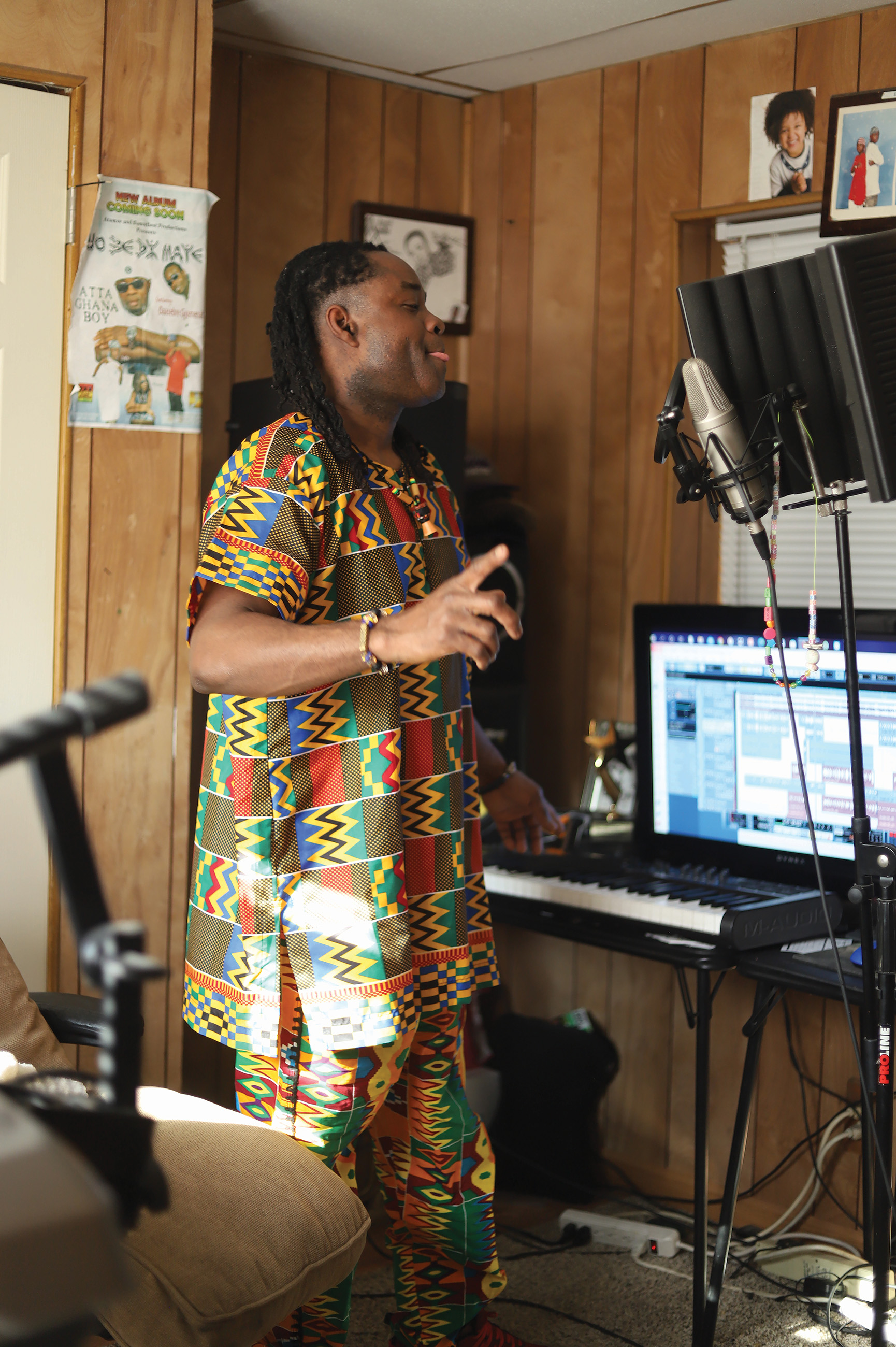 Yeboah produces all his reggae music from his studio where he is accompanied by his many instruments.

After traveling across Europe and Africa with the reggae band Super High Kings, Yeboah was one of the band members who decided to stay in the U.S. following their split in 1997. That same year, Yeboah and four other band members came to Chicago with an offer from a church called Christ Oasis to perform every Sunday.

"I thank God for America and Chicago,” Yeboah says. “They gave me a lot of stuff Ghana never gave me."

In America, Yeboah was able to develop his music career and make money to support his family back home. A year after arriving in Chicago, he decided to get a second job at Northwestern and eventually moved his kids from Ghana to America for a better education. He also helps financially support his father and older siblings back home.

The opportunity to work at Northwestern was a mix of coincidence and curiosity. Yeboah was visiting a friend who worked at the Noyes train station, who then walked him around the Northwestern campus. When they ended up at Sargent Hall, Yeboah wandered downstairs to the admin office.

"I told them I'm willing to do anything, whatever — anything available," Yeboah says. A few months later, he was hired to work at Sargent Dining Hall during the week, leaving the weekends free to pursue music. Yeboah's music draws inspiration from his father, who, for the most part, single-handedly raised him and his five other siblings.

"Most of my music comes from my dad because of his advice. He always tells us to talk about positive things," Yeboah says. 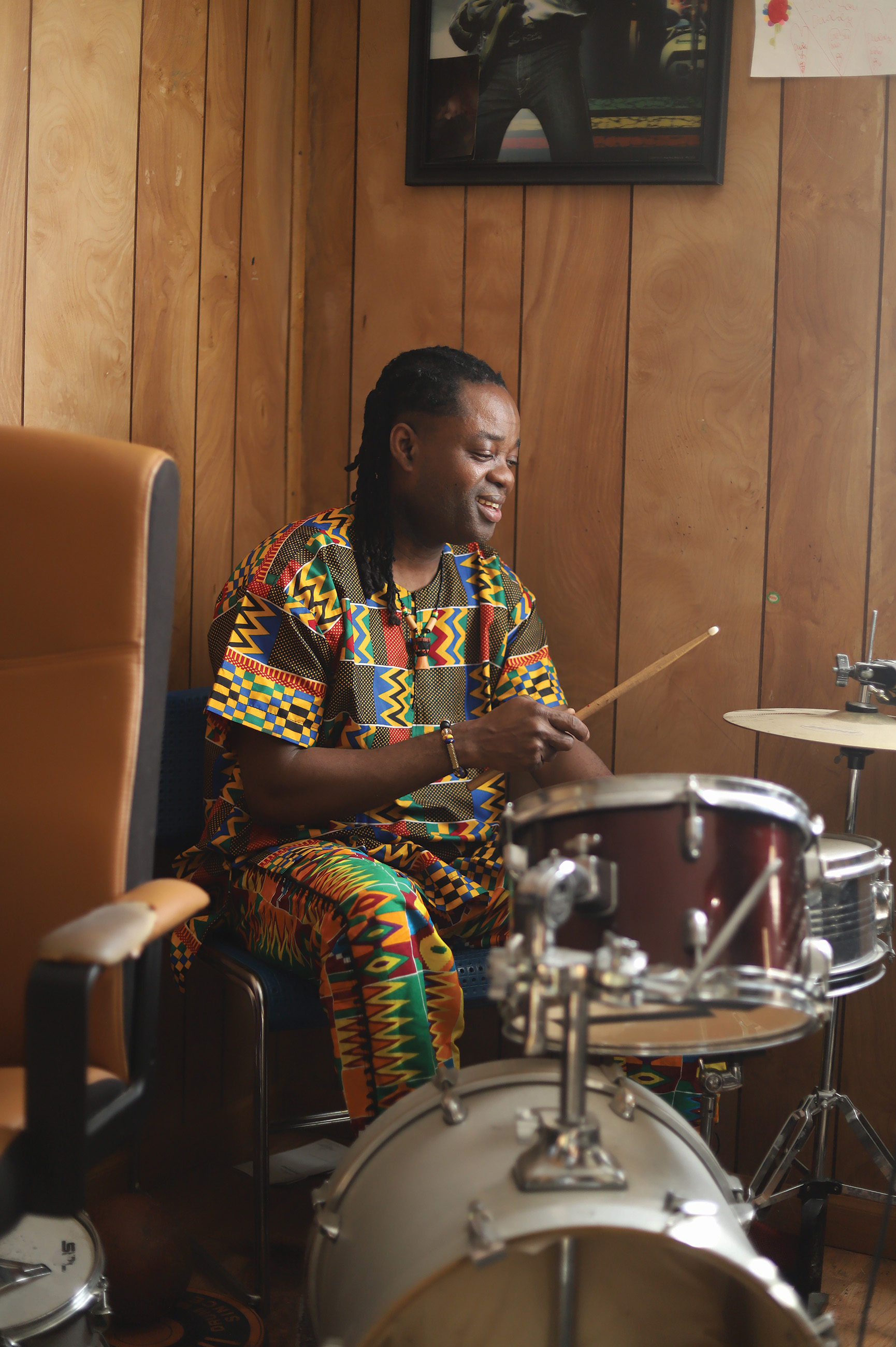 Yeboah's studio has a variety of musical elements, including a drum set, guitar, keyboard and sound system.

Yeboah has some fans at Northwestern. Medill third-year Shareef Jabba met Yeboah in the dining hall, and the two quickly became acquainted. Since then, Jabba has introduced his friends to Yeboah and his music and frequently listens to his songs in the shower.

stens to his songs in the shower. "There's almost like this expectation that you're gonna feel good when you're around Daniel," Jabba says.

As a father of six, Yeboah tries to instill his passion for music in his children. Kobi Yeboah, who works at Mod Pizza in Norris University Hall, says that his father taught him how to record, program and edit music.

"He has six kids and takes care of all of us. He's never been M.I.A. and has always been a great guy," Kobi says.

While Yeboah can't tour as often as he used to, his music career continues to thrive. In the early 2000s he formed his own band, Hydro, before starting his solo career under the stage name Atta Ghana Boy to write and perform his own music. During school breaks, he can travel and tour up to three months at a time. Otherwise, he occasionally finds time for side gigs at local music festivals, private parties and Jamaican clubs like Wild Hare and Exedus II with other bands.

"People stress out too much, and too much is going on in this world, outside, in our jobs and in our life. So it's beautiful [to perform]."

In 2021, Yeboah won Eastern International Act of the Year and Best African Entertainer in Chicago at the Eastern Music Awards and Chicago Music Awards, respectively. He has also been nominated for the upcoming Ghana Music Awards and plans on releasing multiple new songs. However, Yeboah has begun to adopt a more relaxed approach towards his music career.

"I'm not getting younger. I have to make a decision. I'm free, and I'm good," Yeboah says. "Music is passion. When the opportunity presents itself, I go for it."

Nonetheless, he retains the same love for songwriting and performing.

"People stress out too much, and too much is going on in this world, outside, in our jobs and in our life. So it's beautiful [to perform],” Yeboah says. “When you're on stage you look at people singing, smiling and dancing. People are happy. That moment, I think, is a blessing."