Wrestling with the future

Kellogg fifth-year and self-described lover of chaos Joe Spivak lifted me over his head with ease as innocent bystanders watched from a distance on the north end of the Lakefill. At 6-feet-tall and 300 pounds, it’s safe to say the defensive lineman had me outmatched. Thankfully, what may have looked like a scene from an ‘80s movie in which a nerd finally learns his lesson was just part of a morning workout for Spivak. A light day for the professional wrestler in the making. A big day for the professional wrestling fan in me.

In December 2021, 25-year-old Spivak, a star player for Northwestern’s football team, caught the attention of World Wrestling Entertainment. He soon signed on as a part of WWE’s inaugural Next In Line (NIL) class, an opportunity for college athletes to get training from the largest professional wrestling organization in the world. He joined 15 other college athletes in a program where the multi-billion-dollar corporation eyes potential talent, perhaps kindling a few full-time contracts. However, the WWE NIL program doesn’t guarantee a contract or even an on-screen appearance. These athletes have to train hard and hope even harder for their skull-crushing debut in the wild world of professional wrestling.

“I’m just so excited to throw myself into the art of wrestling,” Spivak says.

And there’s no better way to describe professional wrestling than as an art. Professional wrestling is not a traditional competition like football or Olympic wrestling. It’s a performance in which two wrestlers (or three, or four, or 30 in a jam-packed “battle royale”) work together to put on a show in which they fight to an often-predetermined outcome. The New York Times described it in 2016 as “half Shakespeare, half steel-chair-shots.” Twentieth-century French philosopher Roland Barthes wrote an entire essay likening pro wrestling to the “grandiloquence of ancient theater” (fittingly, Spivak was an undergraduate theatre minor).

The WWE is a never-ending TV show with storylines and feuds, in which Hollywood superstars like Dwayne “The Rock” Johnson get their start and the company’s very own CEO plays an exaggerated, borderline-evil version of himself. Sometimes the lines between truth and fiction become blurred, only adding to the performance’s mystique.

But here’s the catch: There are some things you just can’t fake. Sure, you can decide who’s going to win beforehand and script lines for the wrestlers to rile up the crowd, but there’s no way to stage getting pummeled by a steel chair or thrown 16 feet off a metal cage. You can only make it hurt a little bit less.

“What about it is fake?” Spivak asks soberly. “That guy going off the top of the top ropes? He’s still doing that. He’s still flipping. You can’t fake that. That guy that just went through the ladder? He actually did that. They’re taking the Kendo sticks to the back.”

So when I learned I would be doing a workout routine with a future professional wrestler, I feared for my body. I pictured a nightmare scenario in which I couldn’t keep up after the first few minutes. Perhaps something akin to Andre The Giant defeating a nameless featherweight wrestler in a matter of seconds (a common situation aptly titled a “Squash Match”). 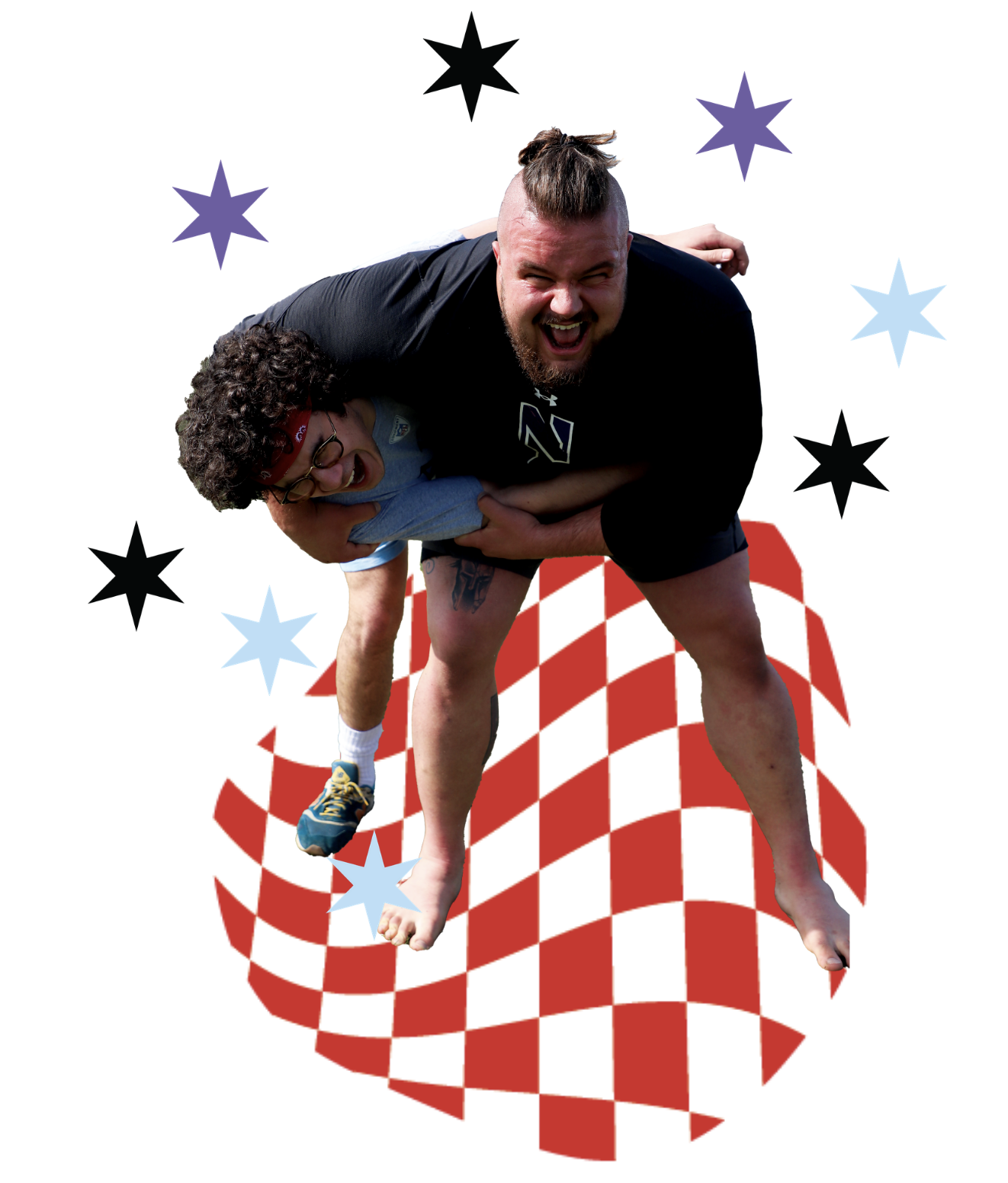 When I saw Spivak approaching the field in his camo Crocs and he informed me it would be a light day, I was relieved. I soon discovered that the workout would resemble a Rocky training montage: running, rolling, tumbling, bear-crawling and plenty of stretching.

Troy Hudetz, Spivak’s teammate and roommate since freshman year, describes Spivak’s athletic ability as “powerful, sneaky-fast and catlike.” He says if he were to come up with a wrestling name for Spivak, it would be “Prowler.”

While Hudetz’s suggestion sounds more befitting a mustache-twirling cartoon character, I can’t disagree with the reasoning. Spivak demonstrated an impressive level of agility and speed for an athlete of his size — something that would surely benefit him in the proverbial “squared circle” of the wrestling ring. I can already picture him rapidly springboarding across the ropes, taking down his opponent in a swift clothesline followed by a signature move — maybe something along the lines of a “Spivak Suplex.”

Spivak has spent time studying professional wrestling, especially since joining the NIL program. He describes the program as “a deep dive into the company’’ through which he gets flown to events like WrestleMania, a yearly spectacle often dubbed the “Super Bowl of wrestling” (albeit with more pyrotechnics, less clothing and about the same amount of Sunday-night drinking). In addition to V.I.P. access to these events, he also meets with what he calls the WWE’s “global partners.” The list includes corporate superpowers like Peacock, Hulu and Toyota. Above all, Spivak gets to meet some of his lifelong wrestling heroes.

“Every single person I meet — whether it’s someone executive like Mr. Levesque or Ms. Stephanie — or other wrestlers, everyone is so down to earth,” Spivak says.

“He was just genuinely one of the nicest people I’ve ever met,” Spivak says. “I want to make that man proud. Want to show him that they’re invested in the right guy.”

Spivak wasn’t always bound for the wrestling ring. At Northwestern, he’s been most well-known as a key defensive lineman for the football team. This past year, he was chosen as team captain and promoted to wear the coveted No. 1 jersey. Northwestern Magazine describes the honor as “the player who best embodies ‘Wildcat values’: being a dedicated student, teammate and community member.” Spivak even had professional football ambitions, hoping to secure a spot in the NFL draft.

“I kind of realized, OK, I love football, obviously. I love violence. I love training. I love controlled chaos,” Spivak says. “And then I quickly figured out that what I love besides that is connecting with people. I love public speaking. I love being in front of a crowd or a camera and really getting human emotion out of somebody. And the more I thought about it, I’m like, well, where do these two things intersect and merge better than the WWE?” 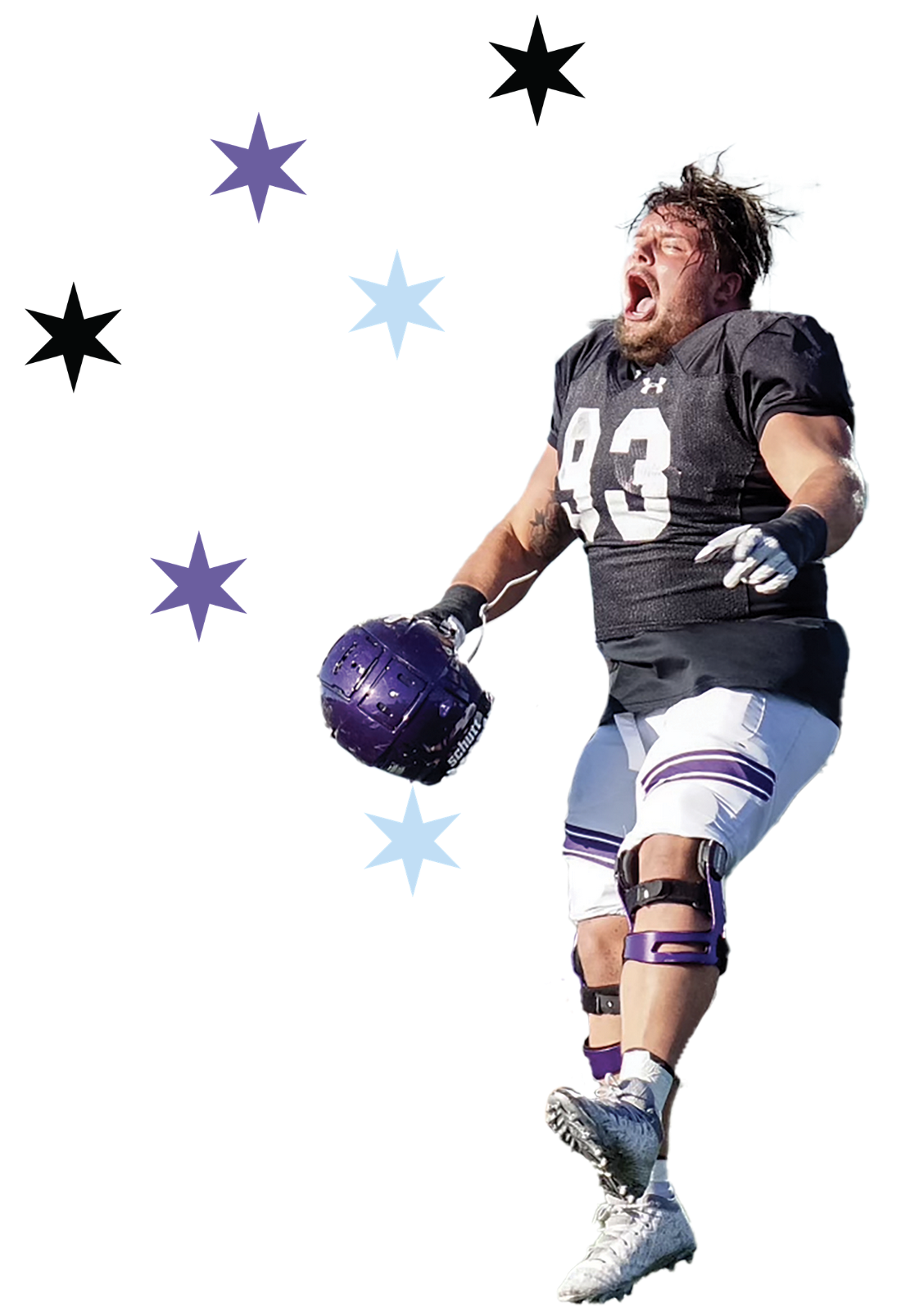 Spivak’s teammates inspired him to try out for WWE’s NIL program. After team workouts, in the comedown of a post-pump high, he and his teammates would often throw on some classic wrestling music in the locker room and imitate the iconic moves of their favorite stars. He describes one instance in which his friend spewed water across the locker room to mimic Triple H.

Spivak says that in moments like these, teammates would approach him and encourage him to seriously consider professional wrestling as a future career path.

“His relentless positive attitude — no matter the highs and lows — carries with him,” Hudetz says. “It’s what’s set him apart to this day.”

Beyond physical ability, Spivak certainly has the larger-than-life personality necessary for a professional wrestler. His quick wit and charisma are apparent in promotional videos for Northwestern’s football team, and he’s emceed events for Wildcat Welcome. Like any great mic-dropping wrestling superstar, he knows how to work a crowd and hype up fans.

“The best part about it all is absolutely, without a doubt, the fans,” Spivak says.

As two lifelong wrestling fans, Spivak and I quickly bonded over our favorite wrestlers. When I asked him the classic question of “Wrestling Mount Rushmore,” or favorite four wrestlers of all-time, he surprised me by naming three — three alter egos of the same wrestler. (Professional wrestler Mick Foley infamously played three different wrestlers at the same time: Cactus Jack, a barbed-wire-obsessed wild west outlaw; Mankind, a masked psychotic masochist; and Dude Love, a tie-dye-clad hippie).

The decision seemed to reflect Spivak’s three avenues in his life at the moment: school, football and wrestling. I can’t imagine how Spivak manages taking four classes, being a star college athlete and potentially becoming a professional wrestler. But somehow he does, all with an inspiring outlook that will undoubtedly take him to the top of any ladder he chooses to climb. (Or jump from, crash through, etc.)

“I have two unbelievable dreams in front of me. And I’m also finishing up my time at one of the best universities in the world,” he says. “My hard days are days that people would dream about.”

That I can confirm. For me, someone who used to envision being a professional wrestler as a kid, Spivak’s days are a glimpse into a dream come true. His easy days are something even greater. As Spivak and I worked through some yoga to finish our training session, the air warmed, the birds chirped and the only thing missing was Vivaldi’s “Spring” concerto. Somehow, Spivak’s positive attitude seems to influence everyone around him, including Mother Nature.

When I asked where he sees himself in five years time if he’s given the golden ticket of a WWE contract, he wasted no time in getting right to the point: WWE Universal Champion contender. “I have so much to prove, and so much to learn,” Spivak says. “And I’m gonna work my ass off every single day.”