She Was a Sk8r Girl

On an unusually warm April afternoon, a group of male skateboarders meet up on the Lakefill bridge to practice skating and hang out. They watch each other attempt grinds on benches and flat ground tricks, yelling words of encouragement and cheering when someone lands successfully. A week later, a group of female skaters meet up in the same place, photographing each other and practicing ollies, manuals and shuvits.

The skateboarding scene at Northwestern is growing — especially the number of female skateboarders. By establishing groups that connect female skaters with each other, the expanding community works to find and create a safe space for women to skate.

McCormick third-year Yabi Ayele says skating can be intimidating, especially because there aren’t many female skaters. She recently formed a group chat with other female students who skateboard. Together, they take the train to Chicago’s House of Vans or Wilson Skate Park.

"The one special thing about skating is it’s very community-based, and if you feel like you don’t have that sense of community, it’s hard to continue with it."

“I definitely need a community and other people to skate with, so I really like that we have this group chat,” Ayele says. She hopes to see more women skating on campus and commends the three students who formed the Northwestern Skate Club last fall.

“[Northwestern Skate Club] is created by girl skaters, which is so cool,” she says. “I feel like it makes it more comfortable for people who are new just to get out there.”

Weinberg second-year Naomi Gizaw, one of the three women who founded the club, says a main goal is to ensure that all skateboarders feel like there’s a place for them at Northwestern.

“When we first started skating, it was pretty exclusive, and it was very male-dominated,” Gizaw says. “The one special thing about skating is it’s very community-based, and if you feel like you don’t have that sense of community, it’s hard to continue with it.”

The club now consists of around 95 members — over half of whom are female — who meet up to skate and trade equipment. Gizaw was surprised at the number of women who joined the club.

While female skaters are beginning to form groups to support each other and encourage new skaters, Evanston does not have a designated park for skateboarders to practice. Luckily, the city has plans to build a skate park about a mile from campus in Twiggs Park in 2023.

Eric Pitt is the co-founder of Evanston Skates, an advocacy group with around 70 members that pushed for the new skate park. After his initial attempts to push for the project fizzled out in 2010, Pitt says his efforts are finally coming to fruition.

“We showed up to these public meetings and were more organized than I think the city realized skateboarders could be,” Pitt says.

The city granted two of the group members permission to join the committee that wrote a proposal request. Now, most of the city’s next steps will take place behind the scenes until the park is built, Pitt says. 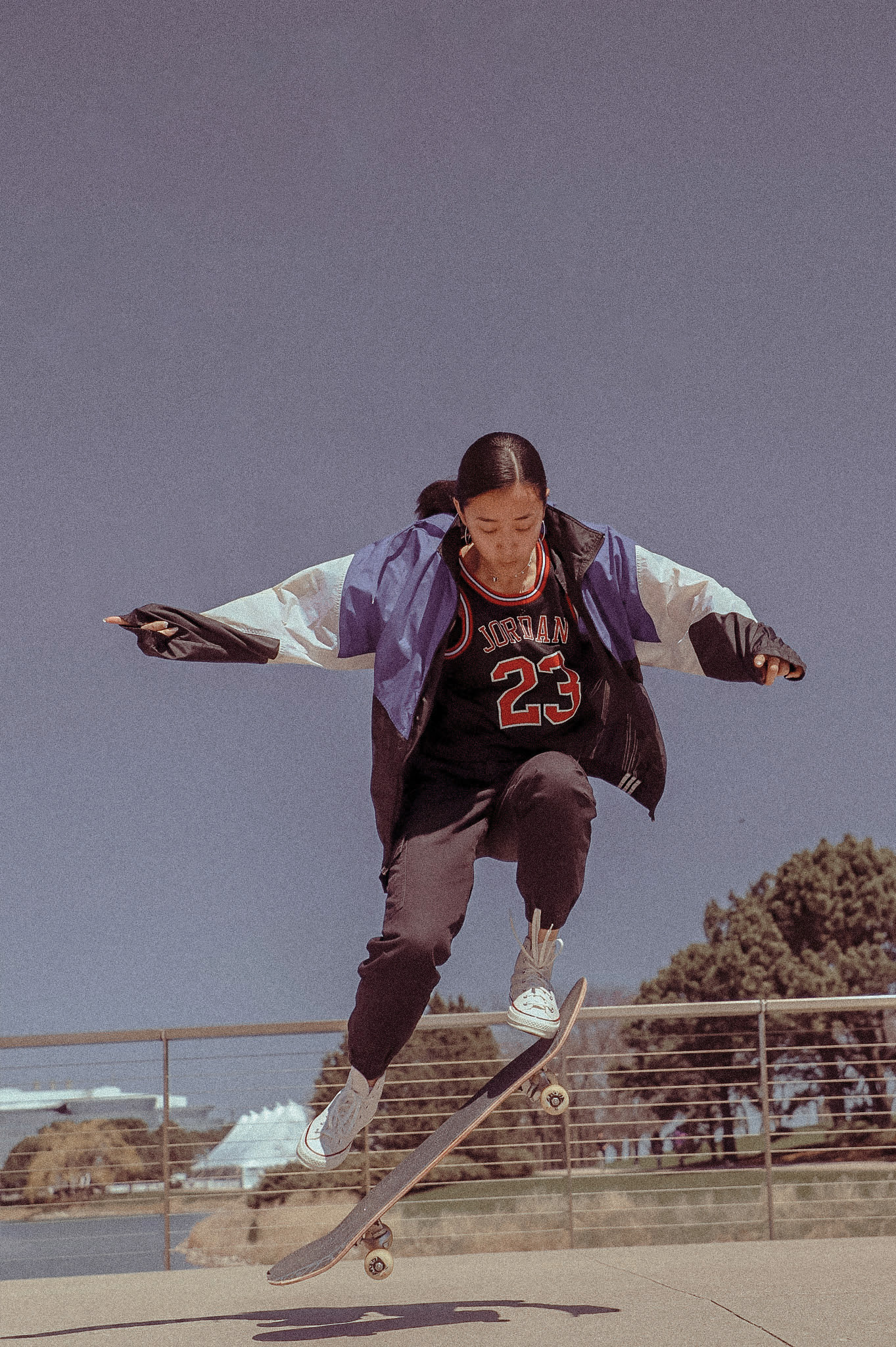 While she looks forward to the new skate park, Communication third-year Sherry Xue says part of the reason that it’s harder to find a community among female skaters is because the majority of riders at skate parks are male.

McCormick third-year Ugomma Korie agrees that skateboarding can be intimidating as a woman. Korie began skateboarding in the fall of her second year as a way to spend time outdoors during COVID-19 and commute across campus, but now she does it for fun.

“I feel like sometimes I get stares,” Korie says. “Not necessarily bad stares, but I feel like I get attention sometimes when I’m skating. I always ask myself, ‘Is it because I have a skateboard and I’m a girl skater?’ Especially being Black, I feel like I stand out a lot, more so than if I was your average guy skater.”

Korie says she’s had to overcome the feeling that she can’t make mistakes on her board out of fear that people will pay extra attention to her.

Weinberg third-year Jess Chen says her first time at a skate park was anxiety-inducing because she felt unwelcome.

“Not necessarily because someone told me, but because we all know when we walk into a room and we stand out or we just don’t feel like we should be there,” Chen says. “But that has kind of changed over time, and it’s something I think very much in your head because of media and exposure and because skating did start as a really male- dominated sport.”

However, Chen says she’s met people at skate parks who have helped make her feel like she belonged since that first nerve-racking experience, including a woman who invited her to a female skate jam event. She also told Chen about froSkate, “Chicago’s first BIPOC Femme + [Transgender, Queer, Gender Non-Conforming or Non- Binary] centered skate collective,” according to its Instagram bio. The collective has hosted more than 70 local skate park meetups and larger-scale events since it was founded in 2019.

“It’s actually super inspiring because these collectives are an inclusive community first and foremost, but then they’re also just super cool,” Chen says. “That has become so powerful; corporations are taking notice of the people power [skateboarding] has.”

When Evanston’s new skate park is built, Gizaw says it will serve as the skateboarding club’s primary meeting place.

"It’s actually super inspiring because these collectives are an inclusive community first and foremost, but then they’re also just super cool."

“As much as there are really cool skating spots on campus, there’s no skate park, which is a spot for all skaters to come together,” Gizaw says. “So it would definitely solidify that community in the sense where everyone would go there all the time.”