The culture behind the cut

Ever since Weinberg second-year Aaron Zheng arrived on campus last year, he has hopped on his bike every few weeks to make the 14-mile, hour-long journey to Chinatown for a haircut at the local salon.

“When you walk into an American barberstore, it’s just, ‘What size do you want, do you want a fade or do you not want a fade?’” Zheng says. “Whereas it doesn’t matter the quality of the Chinese barberstore, it’s always going to be ‘Oh, what style do you want, how do you like it?’” To Zheng, it’s not just about the quality of the cut; it’s also about the comfort of entering a bubble of Asian culture.

Although Asian hair types, textures and styles might not be strikingly different from stereotypically white hair types, there’s something special about Asian hair salons that non-Asian ones can’t replicate. They function as cultural cornerstones where Asian Northwestern students can freely speak a language other than English, listen to Asian pop music and benefit from the expertise of a stylist familiar with Asian hairstyles.

Zheng had already been biking to Chinatown for the Chinese food, but after realizing his need for a haircut and a bit of Googling, he decided to try out Joe Moy’s Hair Salon. Unlike most mainstream businesses, some Chinese places give off an unappealing first impression, says Zheng. As he puts it, “You walk in, and it looks shitty.” Joe Moy’s dilapidated storefront might seems unwelcoming, but the married couple that runs it has a wealth of experience and Chinese familiarity. It’s a two-person operation: The wife washes customers’ hair, and the husband does the haircut.

“Usually when I go in, there’s two or three other really old people who speak a variation of Cantonese that I don’t understand,” Zheng says. “It’s just really fun to see because they’re still keeping this close community outside of wherever they’re from.” 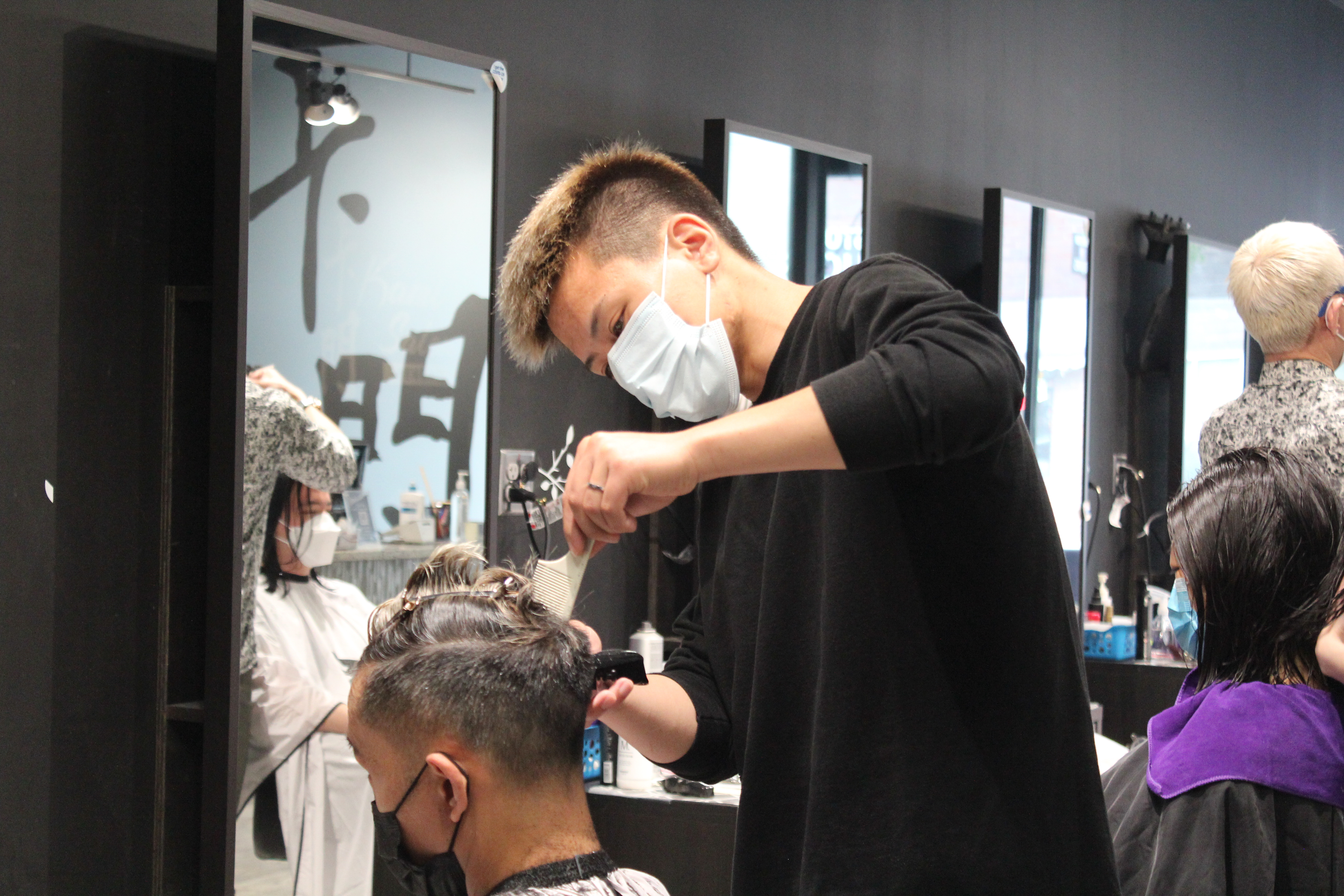 Barbers at Kami Salon are busy at work on May 28. (photo by Victoria Benefield)

Although Joe Moy’s haircuts aren’t always perfect, Zheng prefers them to the non-Asian salons he used to go to when attending high school in Pennsylvania. His experience with haircuts given by white people led him to the conclusion that “White people suck at giving haircuts.” He chalks it up to their lack of familiarity with Asian hairstyles and textures, since Asian hair tends to be thicker.

“Anyone who’s been on campus for at least a year, I would bet a decent amount of money that at least 75% of them, if they’re Asian guys specifically, will go to Kami or have been at least once,” says McCormick fourth-year Alex Li.

“Usually when I go in, there’s two or three other really old people who speak a variation of Cantonese that I don’t understand. It’s just really fun to see because they’re still keeping this close community outside of wherever they’re from.”

“Li has been a loyal customer of Kami since his freshman year and, as a member of the Refresh Dance Crew and Fusion Dance Company, has taken four of his first-year dance team members to get their hair done at the salon in the past year.

Li’s preferred barber at Kami is Ken Yeung. He usually calls ahead to make sure Yeung is available when he goes in for a haircut, as they’ve built up a steady barber-client relationship since his first year.

“By now they recognize me, so everyone will say hi,” Li says. “Whenever I go in, I speak Chinese with [Ken]. It’s one of the rare instances away from home where I get to do it and not feel weird.”

In addition to the staff, the general atmosphere of Kami feels welcoming for Asian students like Li.

“There’s always a fun mix of Chinese pop songs playing, and I’m like, ‘Hey, I recognize some of these from when my mom would play these in the car,’” Li says. “It’s definitely very familiar and comforting every time I walk in.”

McCormick first-year Chris Woodard, a member of Refresh Dance Crew, was one of the dance team members Li took to Kami.

“By now they recognize me, so everyone will say hi. Whenever I go in, I speak Chinese with [Ken]. It’s one of the rare instances away from home where I get to do it and not feel weird.”

Typically, Woodard would go to the chain salon Supercuts back home in Houston.

Weinberg fourth-year Emmy Khawsam-Ang wasn’t as lucky as Woodard and didn’t have anyone to help her navigate hair salons in the area. At first, she went to Steven Papageorge Salon because it had good reviews. While there wasn’t anything wrong with the salon’s quality, she felt that the prices were a bit too high and that she was “more comfortable in non-white spaces nowadays.”

“I just feel like there have been so many microaggressions that I’ve experienced in the past within the Evanston area,” Khawsam-Ang says. “When I’m walking into a store, people don’t treat me as nicely or are rude to me when they aren’t to my white friends. But when I go to the hairdressers with my boyfriend, we are in an Asian space, so we both don’t experience that.”

Her second try, as recommended by her Korean boyfriend, was Park Jun Hair Salon in Glenview.

“I suddenly wanted to dye my hair during the pandemic, as one does,” Khawsam-Ang says. “[My boyfriend] had to translate a lot of times because they couldn’t speak English well and I don’t speak Korean, but it ended up working really well.”

There is a certain level of cultural comfort students identified with Asian haircuts. The bottom line isn’t that the barbers are Asian; it’s that they provide an accommodating and safe environment for Asian students.

Given the racial tensions around COVID-19, Khawsam-Ang says the home-like environment of Asian salons makes them the optimal choice for hair cuts.

“They know what you’re going through, and they’re people who I would feel safe around,” she says.